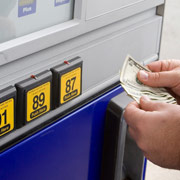 Minnesota doesn’t produce oil. While we process crude oil locally, creating gasoline for state consumption, every barrel of crude comes from somewhere beyond Minnesota’s borders. Complex geological processes created our beautiful, economically diverse state but it left us with no oil or natural gas deposits. Consequently, we import the energy sources necessary to heat and fuel Minnesota.

Energy independence in Minnesota means turning to science, realizing wind, cellulosic and solar energy sources’ potential. Only innovation will move us off of our oil and coal dependence. None of that, however, creates two dollar per gallon gas.

Plundering every square foot of American territory will never produce enough gas at the two dollar level to meet America’s established needs. The “drill, baby, drill” mentality works as a jingle but not as realistic energy policy.

Two dollar per gallon gas can only be achieved through massive tax subsidies, buying down gas’ price to the $2 level. While the current near-four dollar price isn’t gas’ “true” price, it nimbly illustrates a subsidy’s cost.

In the US, we’re consuming approximately 8.5 million barrels of gas per day. A barrel contains 42 gallons, translating into 357 million gallons of gas a day.

Let’s assume uniform national gas consumption patterns, which isn’t quite accurate but I like simple math. Minnesota has 5.3 million people, representing 1.7 percent of the US population. 1.7 percent of 357 million gallons is about 6.1 million gallons. At a $2 per gallon gas subsidy, that’s $12.2 million per day, just in Minnesota. Times 365 days and we’d be paying better that $4.45 billion a year to subsidize $2 per gallon gas through general state taxes. Just in Minnesota.

So, no. I don’t think a tax-subsidized $2 per gallon gas is any more realistic than Congresswoman Bachmann’s plan to drill for oil anywhere and everywhere within the territorial US in order to achieve the same end.