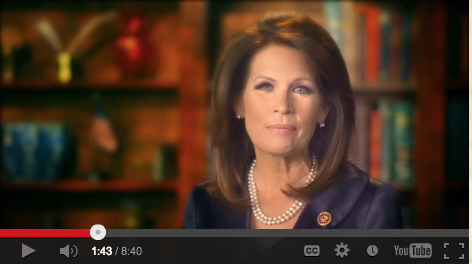 Easily one of the most polarizing members of Congress and of Minnesota politics, Rep. Michele Bachmann announced early Wednesday morning that she would not be seeking reelection to her seat in Congress. She represents Minnesota’s 6th Congressional district which includes St. Cloud and the suburbs north of Minneapolis and St. Paul.

“Be assured, my decision was not in any way influenced by any concerns about my being reelected to Congress,” Bachmann said in a 9-minute video posted to her campaign website. “I have every confidence that if I ran, I would again defeat the individual that I defeated last year.”

The announcement surprised many. She recently purchased campaign ads on local television, 18-months ahead of the 2014 election, an unusual move even for a competitive district.

Bachmann got her start in politics protesting abortion clinics. In the late 1990s, she joined the Maple River Education Coalition, a socially conservative education reform group which later became EdWatch. That became a springboard for her successful state Senate run in 2000.

Her main cause in the Senate — and one that helped increase her visibility and unite socially conservative Christians — was a constitutional amendment banning same-sex marriage.

Speaking at an Edwatch conference in 2004, Bachmann said, “It leads to the personal enslavement of individuals. Because if you’re involved in the gay and lesbian lifestyle, it’s bondage. It is personal bondage, personal despair, and personal enslavement. And that’s why this is so dangerous.”

At one gay rights rally, she was photographed sitting in the bushes, peering out at signs mocking her.

Bachmann was unsuccessful at putting a constitutional amendment on the ballot. Subsequent Republicans would be successful however in 2011, and this proposed amendment was voted down by the people of Minnesota in 2012.

Bachmann announced her decision to run for Congress in 2005. At an October 2006 speech at Living Word Christian Center, Bachmann told attendees that she ran because of a vision from God.  “God then called me to run for the United States Congress and I thought, ‘What in the world would that be for?’” She said she and her husband prayed and fasted, and God made it clear she was to run for Congress.

Bachmann won that election and was sent back to Congress by residents of the 6th Congressional district in 2008, 2010, and 2012.

In her video on Wednesday, Bachmann told her supporters that she will continue her crusade on socially conservative issues. “I promise you I will continue to fight to protect innocent human life, traditional marriage, family values, religious liberty and academic excellence.”

Her career in Congress was one fraught with controversy right out of the gate.

In January, at the State of the Union address, she spent an unusual amount of time clinging to President George W. Bush.

In February 2007, in support of the war in Iraq, she claimed to know of a secret plan by Iran to partition Iraq.“There’s already an agreement made. [Iran is] going to get half of Iraq and that is going to be a terrorist safe haven zone.”

In October 2008, she called for an investigation of Congressional Democrats: “What I would say is that the news media should do a penetrating expose and take a look. I wish they would. I wish the American media would take a great look at the views of the people in Congress and find out if they are pro-America or anti-America.”

She became a champion of the incandescent light bulb. She suggested that the swine flu was a product of Democratic presidents. She claimed that public schools would take students on field trips to get abortions. She said she would not fill out the full Census for fear the government would use her information in similar manner to the internment of Japanese-Americans during World War II. Of AmeriCorps, she said the expansion of the program amounted to “re-education camps” for young people by the liberal government.

On the issue of Cap and Trade for carbon emissions, she said, “I want people in Minnesota armed and dangerous on this issue of the energy tax because we need to fight back.”

By the end of 2009, she was the darling of the Tea Party movement, and she ramped up opposition to the Affordable Care Act.

To a crowd of conservative activists in Colorado, she said, “What we have to do today is make a covenant, to slit our wrists, be blood brothers on this thing. This will not pass. We will do whatever it takes to make sure this doesn’t pass.”

In 2010, she accused Obama of spending on lavish trips overseas. “The president of the United States will be taking a trip over to India that is expected to cost the taxpayers $200 million a day. He’s taking 2,000 people with him. He will be renting out over 870 rooms in India. And these are five-star hotel rooms at the Taj Mahal Palace Hotel. This is the kind of over-the-top spending.”

Bachmann’s numbers bore no resemblance to the actual costs of the trip, which were exponentially lower.

Bachmann announced in 2011 that she would run for the Republican nomination for President of the United States, a campaign that at first looked to be on solid group when she won a poll of Iowa activists in August 2011.

But her campaign took a nose-dive. She returned to the Congressional race and eked out a very narrow victory — about 4,000 votes — over challenger Jim Graves.

Today, allegations of ethical violations among her presidential campaign staffers have clouded her reelection prospects.

Bachmann didn’t miss an opportunity to take a swipe at the media. “I fully anticipate the mainstream liberal media to put a detrimental spin on my decision not to seek a fifth term,” Bachmann said in her retirement video. “Since I was first elected to Congress, many years ago, they always seem to attempt to find a dishonest way to disparage me. But I take being the focus of their attention and disparagement as a true compliment of my public service effectiveness.”

She didn’t give much of a clue as to the future of her political career, leaving some to speculate whether she would enter the race for the U.S. Senate against Al Franken or make a run for Governor against Mark Dayton.

“There is no future option or opportunity, be it directly in the political area or otherwise, that I won’t be giving serious consideration if it can help save and protect our great nation for future generation.

Already, talk of filling her seat with another arch-conservative candidate has begun. Former Secretary of State and current state Senator Mary Kiffmeyer isn’t ruling it out. Other names being floated include Minnesota Taxpayers League’s Phil Krinkie and Jim Knoblach, both of whom lost the GOP endorsement to Bachmann in 2006, and former gubernatorial candidate Tom Emmer.