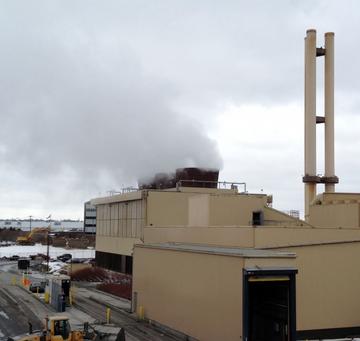 I now have a little paper bag in my kitchen, filled with banana peels and coffee grounds, with a few apple cores thrown in. There are also some chicken bones and egg shells, but as I write this, I look up “should you put meat in your compost?” on Google and I realize that you’re not supposed to compost meat, so I guess I’m going to have to start over.

This is actually my second bag. The first one was first thrown away by my boyfriend, who didn’t realize I was saving it. He’s not happy about the whole project, as it stinks up the kitchen. But I’m intent on soldiering on until I figure out how to do it right. Of course, I’m not really sure what to do with the scraps. The first bag, which I rescued from the garbage, I buried in the back yard, behind the house. This doesn’t seem an ideal solution, as I’m going to run out of hiding places quickly before my landlord finds out. I guess I’m going to have to find a nearby community garden that will take them.

This is all inspired by the second mayoral debate that I went to, in which the first question dealt with the HERC incinerator. Hennepin County wants to increase the amount of garbage that gets burned, and the candidates all weighed in on where they stand on the issue. They were divided on it, with half of them singing its praises and the other half speaking against the expansion. Don Samuels declared that studies have shown it to be safe; Mark Andrew said it was actually a green initiative as it produces energy; and Gary Schiff said we’ve been given a false choice between landfills and the incinerator, saying instead that our city needs to become zero waste (with Betsy Hodges on that same team).

It’s a beautiful idea. Just imagine: what if we really could become a zero waste city? San Francisco is leading the charge on this, with an aim to become zero waste by 2020, with a number of other cities, especially out west, not far behind.

But Jackie Cherryhomes (who later got flack for not revealing at that moment that she had been a lobbyist for Covanta, the corporation that operates the HERC), made the obvious point that even if we aim to become zero waste in the future, we’ve got a long way to go before we’re there.

Later that night I went home and looked in my garbage can. So much stuff! I realized there were a few things in there that could be recycled, so I took them out, washed them, and put them in the recycling bag that we keep next to the garbage. But for the other stuff—the food scraps—I knew that I had to do something.

I’m not at all convinced that that incinerator is safe, but I’ll admit that it’s a confusing and complex issue. How much mercury, dioxins and heavy metal being released into the air is “too much”? (Not to mention the toxic ash that gets put in landfills anyway?) And how does this compare to the impact of increasing landfills? I also have questions about equity: how much is North Minneapolis being negatively impacted by the incinerator as opposed to other parts of the city? It also doesn’t seem quite fair that as Minneapolis decreases the amount of waste we produce (by recycling more), we would just get more garbage coming in from the suburbs to burn here.

Last month, the Strib reported that preliminary results from the Minnesota Pollution Control Agency “show no ill effects” of the incinerator, but I’d just as soon wait for a full Environmental Impact Study (EIS). It’s very confusing trying to get information about whether the incinerator is safe, as one side says one thing and the other says another.

In any case, I’m continuing my quest to reduce my own waste, but I recognize it takes baby steps. It’s kind of like how I bike, but I also have a car, for when it’s too icy or too far to drive, or I’m late. I’m not perfect, and also no one person can do it by herself. It’s going to take a great effort by the whole city—and policy that supports green behavior (as well as education)—to start making a dent.

Oh, and by the way: don’t forget to caucus on Tuesday! If you have views on this, make sure they’re heard!