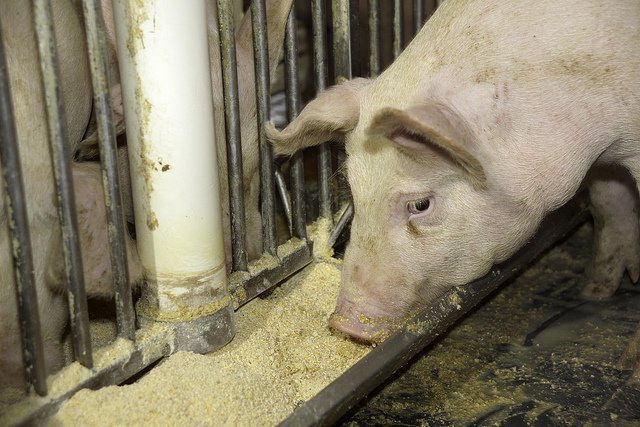 How much would you pay for a pork chop that was two percent leaner? Would you eat such a pork chop if nanoscale minerals were mixed into the hog feed to achieve that two percent reduction? Such questions are before the Food and Drug Administration (FDA) as it considers what to advise the animal feed and mineral supplement industry about their efforts to incorporate atomic- to molecular-sized materials into feed.

This summer, the FDA requested comment on what to advise the animal feed industry about nanomaterials. IATP and others have repeatedly called for the FDA to require pre-market and post-market safety assessment of nanomaterials prior to their commercialization. To the latest FDA request, IATP responded that if FDA continues to not require adequate pre- and post-market safety assessments, it should at least strongly urge the industry to report to FDA in great detail about its nano-feed products. We also said that industry reported data affecting public health, the environment and worker safety should be not classified as Confidential Business Information (CBI) not available to the public.

Feed for agricultural animals is largely formulated from grains and oilseeds, mostly corn and soy. A very small fraction of the feed, perhaps four percent (measured in grams per kilogram), comprises a premix of essential minerals and vitamins. Nanomaterial additives to feed are measured by micro-grams, i.e., millionths of a gram, although it is not clear how such minute material can be weighed accurately. According to recent research, nano-sizing feed, or indeed, food, additives enables more rapid and complete absorption of essential minerals and vitamins. As a result, for example, hogs consuming nano-sized chromium result in leaner and “better” pork.

The FDA draft guidance advised industry not to assume that because a mineral in conventional feed had been deemed Generally Recognized As Safe (GRAS) by the FDA, that the nanoscale version of the same mineral would also be GRAS. IATP strongly supported this commonsensical advice. The draft guidance also implied some important questions.

The FDA asked the feed industry how it would ensure that nanomaterials were uniformly mixed in feed so that a hog or a cow would not be overdosed with a nano-scale essential minerals, such as zinc or chromium. IATP suggested that the FDA also ask how that uniformity would be maintained after manufacture, since nanomaterials, if not chemically bound, are highly mobile. A uniform mixture during feed additive manufacture might become less so during feed storage and on-farm use.

FDA informed industry that every use of a nanomaterial would be reviewed on a case-by-case basis. We urged FDA to require both a pre-market and post-market safety assessment of all nanomaterials and to prohibit industry Confidential Business Information claims about data in such assessments that pertain to human, animal and/or plant health, and worker safety. However, FDA is budget hamstrung by zealously anti-regulatory members of Congress, so we urged the agency to evaluate the nanomaterials that bio-accumulate in humans and animals first, including nano metal oxides, metals and carbon nanotubes (used, e.g., to strengthen automobile parts).

As far as we know, nano feed additives have not been commercialized but remain in the research and development phase. If so, IATP urges FDA to use the information and data gathered from the animal feed industry in the voluntary consultations with the FDA to do pre-market safety assessment. If nano-food additives have been commercialized without FDA pre-market safety assessment, IATP urges the agency to force withdrawal of those products from the market until FDA and other agencies demonstrate that they safe for consumption by animals, safe for the environment and safe for the workers who manufacture and use nano feed additives.

FDA and other U.S. federal agencies with legal obligations to protect public health, the environment and worker safety, invest hundreds of millions of dollars every year in the research and development of products that are enabled by nanotechnology and/or that incorporate nanomaterials. This use of the taxpayers’ money should include public meetings about whether specific nanotechnology applications are the optimal means to achieve a technical or policy objective. It may well be the case, particularly in food and agricultural applications of nanotechnology, that technologies or agricultural practices already exist to achieve the National Nanotechnology Initiative (NNI) co-funded or supported objectives less expensively and with less risk.