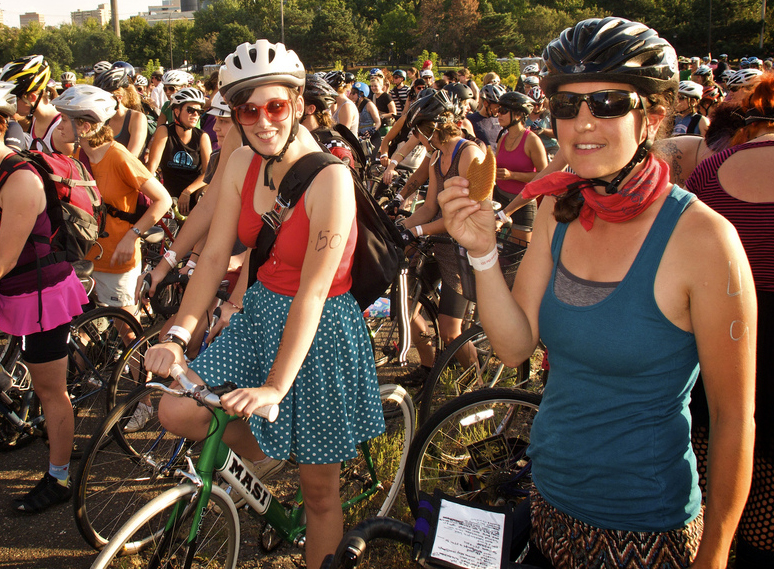 On Saturday, September 8, I raced for my second year in Babes in Bikeland, an alley cat race for women and trans bikers. This year I had a new bike to race with: a tiny road bike that has been deemed the #ponycorn. I also had a new racing buddy. Since my usual biking gals were unavailable, I rode with a friend of a friend, which ended up being super fun. She is pretty fast and I am not-so-fast so I had some moments of OMG I AM GOING TO DIE but I kept up as best I could. She was awesome about it, teaching me how to draft, waiting for me to catch up when she dropped me, and being relaxed about the whole race.

At one point I said “I should probably eat some Gu or something,” to which she replied “yeah, I agree, I was thinking earlier that you looked paler than you did before.” Ha ha, I thought it was just kind of hilarious because I certainly felt paler than I felt before! I ate this cute little power waffle that was delicious and tasted like a stroopwaffle (omg have you been to the Netherlands?!) and I later learned it was supposed to taste like a stroopwaffle. After the waffle snack we biked a whole lot more and we climbed some hills up to the Witch Tower in Prospect Park, and again I thought I was going to die. Since I’m new to a bike with gears I totally forgot that I had this whole other set of gears that were lower than the ones I was using and I didn’t have to be on the verge of death all the way up the hills. Useful lesson learned, thanks to my racing buddy again.

When we finished (and I had this feeling like oh there are only 50 or 60 people here at the finish line—later to find out we came in 131st) we got raffle tickets and snacks. OMG snacks. My little snack bag contained—wait for it—hot Cheetos! Sadly no one had Takis, but we had a good mix of goods. One of the things I shoved in my face was a Fruit Roll-Up. It was way more delicious than I ever remembered a Fruit Roll-Up tasting. Kind of makes me want to go back and taste some Dunkaroos and Fruit-by-the-Foot and those little cheese and cracker things with the red stick (actually I’ve had those crackers in the last few years and they are still good, but then, I have a weakness for fake cheese).

After snack hour we signed up for massages (which I never ended up getting because whoa long line) and then danced for a bit. It’s rather hard to dance when your legs feel like pudding but I did my best. Finally, it was time for the raffle and the prizes and the winners! My racing buddy’s friend who I had the pleasure of hanging out with at the after party for awhile was one of the out of town winners which was awesome. Pretty sure she won a bike. When the time came to raffle off a bike, I read my number and made a sadface because the winning ticket was one number before mine. Then I thought to myself, “Did Megan (my race buddy) get a ticket before or after me?” Well, she got her ticket before me and that means…she won a bike! Her birthday was the next day so I thought it was extra awesome. I also felt less badly about slowing her down because if we hadn’t gotten our raffle tickets exactly when we did…no purple bike for Megan! Hoorah!

After leaving the party with @spencerhaugh, I went to Pizza Luce for a slice of pizza and then home to SIT ON MY BUTT. I realized I had a gash in my leg from backing into my pedal when trying to hug @jessinader (lesson learned: don’t try to hug Jessica!) and was absolutely covered in grease. I don’t know how I managed to get both legs covered in chain marks even up to the back of one thigh, but I guess I’m just amazing. I took the best shower in the entire world and went to bed.

Surprisingly enough, I was able to walk the next day! Ladies and lady-types, if you like riding bikes and haven’t ridden in this race before, check it out! The next one coming up that I get excited about is the Queer Bike Gang’s Cirque du So Gay! Hope to see you there!