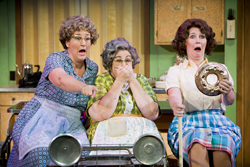 A Mighty Fortress is Our Basement is the fourth installment of the shows starring the Church Basement Ladies. These shows have done for Lutherans what Nunsense has done for us Catholics: cashing in on the nostalgic memories of the Baby Boomers who love to remember the simpler times.

A Mighty Fortress is Our Basement is a production of Troupe America Inc. and is in its premiere run at the Plymouth Playhouse. My first exposure to the Church Basement Ladies was their holiday production: Away in the Basement. As I did at that show, I invited my Lutheran friend to attend with me and she was very helpful. She explained that the title is reference to the Lutheran hymn “A Mighty Fortress is Our Lord.” She also explained about Reformation Sunday, the Sunday in Lutheran tradition that commemorates the day that Martin Luther posted his 95 theses, leading to the Protestant Reformation and the birth of the Lutheran church. There is definitely an assumption that the audience already knows this.

Almost all of the original cast members have returned. Janet Paone plays the matriarch of the kitchen with a no-nonsense approach and a reluctance to accept change. Greta Grosch, who is also the playwright of three of the shows, plays Mavis Gilmerson with a flair for slapstick comedy
that reminds me at times of Lucille Ball. And Dorian Chalmers as Karin Engelson plays the mother of Beverly (Tara Borman) who is struggling with the fact that her 15-year-old daughter is wearing her first pair of high heels and preparing for confirmation. The two of them sing the lovely “Growing Up, Letting Go.”

A Mighty Fortress is Our Basement goes back to 1959 and follows up on the relationship between the Pastor (Tim Drake) and the recently hired religious education director that began in the holiday show. The Pastor orders an engagement ring from Montgomery Ward, pops the questions, and a wedding is planned for Reformation Sunday. The plot seems a little contrived in that the entire show takes places on Reformation Sunday, but there are flashbacks to May, then September, then back to August, and then back to October. I felt that they could have told the same story in a forward direction, which would have been less confusing.

However, the jokes at the expense of both the Lutherans and the Catholics (the bride’s family is Catholic) are familiar and hit the mark for the audience members. The ladies decide they need new dishes since the Catholics will be coming, and decide to run a food booth at the county fair. The fair scene was clever but short, and I would have liked to see more. The other fun scene was the one where Karin Engelson learns to drive so she can take the family car to Fargo on her own.

The danger with any successful franchise is knowing when to say when. How many times can we laugh at the Jell-O jokes and the no-nonsense manner of Norwegian Lutherans? Perhaps the answer is that people love the familiar, and the Church Basement Ladies will always be able to deliver.

Reviewing A Second Helping, Rena Archwamety wrote that the series “might be a familiar recipe with a predictable plot, but the ensemble successfully brings out the flavor and adds some spice to this hotdish.” I think you will find this to be true of this fourth episode as well.