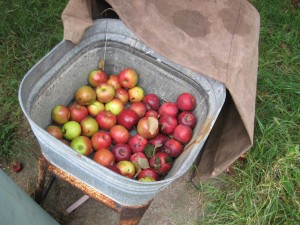 One of the duties on a quick visit to the home farm near Berlin, North Dakota was to harvest the last of the landfalls off the apple tree beside the house.

This was a good year for apples – at least for three of the four trees on the homestead – but very few of the apples were salvageable, mostly landfalls that either rotted or were partially eaten by one critter or another. Produce from nature doesn’t wait around to be attended to. My uncle and aunt couldn’t get to the task, much, this year.

I picked what seemed to be usable apples and temporarily placed them in an old washtub – a relic of the days before washing machines – and mowed the grass.

My uncle and aunt knew that most of their apples would end up spoiled, and that was distressing. In some other year there was a lot of apple juice, etc., coming from these trees.

This year, almost nothing from the trees would actually be consumed.

While I mowed, my mind wandered back to a long-ago visit to a relative’s home in Mt. Angel Oregon, not far from Salem. It was 1971, and I was in a summer program at an area college. We went out for dinner at this family’s home. We’d never met before.

I remember nothing about the visit except for the huge Bing cherry tree beside the house. This was an undisciplined tree, reaching so high that the fruit on the topmost branches was unreachable. In fact, most of the cherries were rotting on the ground. This astonished me, a kid from the midwest who grew up when perhaps once a summer a truck would come through with these same luscious cherries for sale, and my parents might buy a lug or two for canning purposes. And here I was seeing these riches of the earth rotting on the ground – no doubt a smelly nuisance to the homeowners.

As I completed my mowing, I put together a small pail of the best apples and went back to town, and then back home to the Twin Cities.

My thought process changed as time went on.

Those apples rotting on the ground were simply the fruit of its labor.

Next year is another season. Maybe lots of apples, maybe few, maybe none.

Hopefully I can give back at least as much as I took out as my own cycle of life continues.

Make it a productive season.

Vince and Edith’s garden was as productive as ever. There were immense numbers of green tomatoes, and some great muskmelons still thriving. No killing frost yet, but this is the time of year when that is bound to happen on the North Dakota prairie. Everyone, the natural world included, begins to hunker down for fall and then winter.