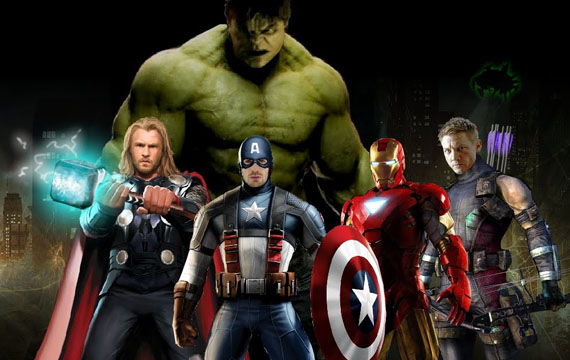 I’m at the median age of the Avengers cast—older than Captain America, younger than Hawkeye—which is apparently old enough to reminisce about the action movies I grew up with, since that’s what I started doing while driving home from Joss Whedon’s new film. What I remember about those post-Jaws, pre-CGI classics are the little moments. The guy rollerskating backwards while Superman saves the world. Indiana Jones blithely shooting the showoff swordsman. The crying Ewok.

There are no crying Ewoks in The Avengers (for better and for worse, Whedon’s heart doesn’t bleed quite as freely as George Lucas’s, nor do his eyes gape quite as widely as Steven Spielberg’s), but Whedon knows how to nail a moment, and the intelligence, taste, humor, and sheer fun that fuel The Avengers put it in league with the best action-fantasy movies I’ve ever seen.

It’s gratifying that Marvel Comics legend Stan Lee, who has a cameo in The Avengers, has lived to see what’s starting to look like a new golden age of superheroes. Some screenings of The Avengers will be preceded by a trailer for Christopher Nolan’s The Dark Knight Rises, and Nolan’s gothic noir style is a marked contrast to the breezier flavor of the Avengers franchise. I’m partial to fun vs. anguish, but unless Nolan totally drops the ball, 2012 will mark the official arrival of a generation of action-fantasy directors who deploy CGI as effortlessly as greats like Ray Harryhausen and Frank Oz used models and puppetry in the 70s and 80s—like Harryhausen and Oz did then, filmmakers today can focus on using their tools well, in the service of movies that aren’t just expensive, but are actually good movies.

I’m focusing on the big picture here, because there will be thousands of comic geeks (I use the term with great affection) who will take care of the necessary business of parsing details about how these characters are handled. I’m a little vague on the details of the Avengers’ history—I haven’t even seen all the recent movies introducing the characters who figure here—so it’s testament to Whedon’s achievement that this movie pleased me as well as hard-core comics fans like my friend Lisa, who was at the same screening I was and later tweeted that “it was like looking into the sun.”

The plot is remarkably coherent, as far as these things go. Troublemaking Norse god Loki (you may remember him from the movie named after his brother Thor) has forged an unholy alliance—I love that I get paid to write stuff like this—with an alien race who have a motive straight out of H.G. Wells (basically, they just like to conquer stuff) and a look straight out of H.R. Giger (specifically, his work on Alien). When Loki opens a portal between the alien world and our own, who you gonna call?

Not the Ghostbusters—which in 2012 is probably for the best—but a group of superheroes who blessedly include the man who’s finally given the 21st century the kind of wisecracking realist once played so well by Bill Murray and Harrison Ford: Robert Downey Jr., whose Anthony Stark (a.k.a. Iron Man) anchors The Avengers to reality precisely by acknowledging its unreality. When another character rhetorically asks Stark what he is without his iron suit, he shrugs. “Genius, playboy, billionaire, philanthropist.” You know. Those superhero day jobs.

Whedon was reportedly hired for this picture in part because of his skill at corralling large egos, and the egos aren’t the only things he keeps in check in this long (143 minutes) but tight feature. Every character is given a well-sketched personal conflict, and Whedon—working with a fine cast that’s finest where it most needs to be—paints the characters so concisely that he leaves room to let sparks fly among them.

The film has great fun with Chris Evans’s square Captain America (“There’s only one God, and I’m pretty sure He doesn’t dress like that,” quips the Captain dismissively when informed that Thor and Loki are deities), and Mark Ruffalo’s Hulk manages to provide both the film’s best comic relief and its most poignant moment. This Hulk is so good that he more than makes up for the miserably failed reboots with Eric Bana (2003) and Edward Norton (2008); aptly, when green, the Hulk is voiced by the irreplaceable Lou Ferrigno.

The action comes in staccato bursts of quick clashes, and Whedon handles it well, tying the shots together so fluidly that applause occasionally burst out at the preview screening out of sheer appreciation, I gathered, that we actually understood what just happened there! The action isn’t what makes this film great—a scene where Black Widow (Scarlett Johansson) piggy-backs an alien speeder will beg unfavorable comparisons to the virtuoso Endor scene in Return of the Jedi—but it’s good enough to excite rather than distract, Whedon using the freedom of CGI to create a rich variety of textures and scale. I’m not saying The Avengers is Citizen Kane, but it’s one of the rare fantasy-action films that makes you think that maybe the director possibly watched Welles’s famous depiction of outrageous grandeur and learned from it—which is praise enough.

The climactic battle takes place in New York City, the only completely acceptable place (except maybe Tokyo) for a climactic superhero battle scene to happen. (As my friend Bob observed about Thor, it was hard to get very excited about a movie where a battle of the gods barely manages to trash a trailer park.) The long middle section of The Avengers is set on a flying aircraft carrier (don’t even ask how that works), putting an aerial twist on the old standby plot convention Roger Ebert refers to as the Impregnable Fortress Impregnated. The Avengers also put me in mind of Ebert’s observation that in most cinematic fistfights, “it sounds like they’re beating the hell out of a Naugahyde sofa with a ping-pong paddle.” For the metal-and-man Avengers, it sounds like the foley team threw a rain cover over a Buick and whacked at it with a nine-iron.

Here’s another golf-related simile: when you have a shot at going over a lake and landing on a green, you know the chances are good that you’re about to waste that golf ball and penalize yourself two strokes. But if you keep trying, over and over, and learning from your mistakes, eventually you’ll nail that shot and roll it right up to the cup, and you’ll say, yes. That’s why I took that shot. Any fan of superhero movies has sat through a lot of stinkers, but go see The Avengers, and afterwards, you’ll stand up and think, yes. That’s why they make $220 million dollar movies. This one’s an ace.