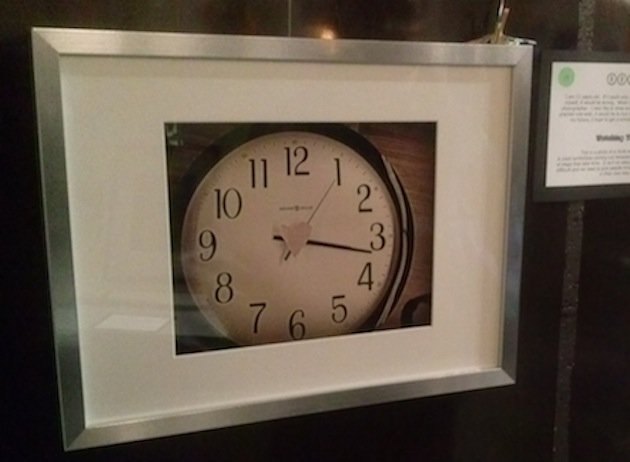 Junior high students at Avalon School in St. Paul produced a photo exhibit called OUT (The Closets We Created) as part of a service learning project in support of LGBTQIA (Lesbian, Gay, Bisexual, Transgender, Questioning, Intersex, Ally) rights. At the opening night on January 31, students displayed their work, spoke about the project and mingled with guests over appetizers.

The youth-led project was facilitated by EDIT, a small nonprofit organization with a mission to empower youth to promote equity, diversity, and inclusion together (EDIT) through service learning, leadership, and the arts. Avalon contracted with EDIT to teach their junior high humanities class in October. As part of required service learning, students selected a cause that they wanted to support, researched the cause, and worked on a project to support the cause.

The night started off with an open house where the guests had the opportunity to look at the pictures on display, network and mingle with each other, and eat appetizers. The presentation started off with a welcome from Ben Cooney from EDIT, who worked with the students from Avalon. Then student Alex Dukart talked about why they decided to name the exhibit OUT (The Closet We Created).

Another student talked about her experience being openly pansexual, a person who is sexually interested in other people regardless of gender. Vi Haldeman, a youth counselor from Avenues for Homeless Youth talked about the shelter. Robert Droddy spoke about Freedom to Marry and the work that they do. The presentation ended with a song and guitar accompaniment by Avalon student Connor Magee.

Dia Taylor said she was a part of the class and even though she didn’t have any photos on display she was still a part of the process. She told me that they decided as a group that they wanted to be involved in LGBTQIA (Lesbian, Gay, Bisexual, Transgender, Questioning, Intersex, Ally) rights.

Taylor said that they researched organizations that support the LGBTQIA community. The students decided to support Freedom to Marry, an organization that fights for gay marriages, and Avenues for Homeless Youth, an organization that provides emergency shelter, short-term housing and supportive services for homeless youth. The proceeds from the sales of the photos will be split between the two organizations.

Henry Marek, a 13-year-old student had two photos in the exhibit. One of the photos was the cover of Dr. Seuss’s My Many Colored Days. He said that his photo represents the many beautiful colors of the LGBTQIA Community. His other photo was titled “Happy” — a picture of a lady standing in front of the Avalon sign holding a blackboard with the word happy on it.

Each photo had artist information on a card, including the student’s name, age, the career they want to pursue etc. The card also told why the artist took the photo and the inspiration behind the photo.

Some photos are still available for sale. For more information or to purchase a photo, contact Ben Cooney, ben@edittheworld.org 612-296-7371, www.edittheworld.org.