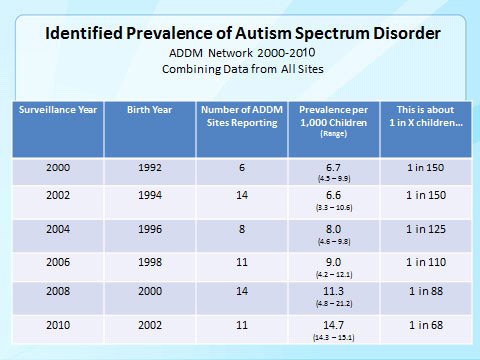 The rise of Autism-Spectrum Disorder diagnoses in the United States. Source: Center for Disease Control, 2014.

This is Part One of a series on autism-spectrum disorders and the theatre.

The meteoric increase in autism-spectrum disorder diagnoses in the United States presents one of the major social issues of our time. Although experts continue to debate the exact causes of this phenomenon, its impacts are profound and far-reaching, affecting public education, employment, and social interactions–not to mention the countless lives of friends, families, and individuals directly involved. Although exact figures vary, one of the most recent studies, using data from 11 research sites across the US, found an overall prevalence of autism of 1 in 68 amongst 8-year-olds. These diagnoses cut across all socio-economic classes, racial and ethnic divisions, and locations.

The term “autism” as it is broadly used encompasses a wide spectrum of symptoms, including the previously separate Asperger’s syndrome diagnosis. Some of the more common symptoms involve difficulties with social interaction, communication, and behavior–all of which are key areas for cognitive development. These issues often manifest with difficulties reading the nuances of social communication, discomfort with crowds and loud noises, and outbursts of verbal and sometimes physical tics and fits. Although these do not necessarily prevent an individual with autism from attending a movie theatre, concert hall, or live theatre, in practice they usually make such experiences a source of considerable stress. This barrier to participation, in practice, deprives many individuals with autism of the many cognitive, social, and developmental benefits experienced by regular attendees of live theatre –a deprivation that does make conditions easier in the long-term.

One response to this unintended exclusion is the development of what are called “sensory-friendly” performances: Theatrical productions that have been slightly modified to avoid trigger stimuli. Noise levels are restricted to a certain range, strobe lights avoided, and flashing lights minimized. Care is taken to restrict or remove flying objects that head into the audience and cause undue alarm, and a variety of supporting materials are made available: squeeze toys called fidgets, noise-cancelling ear-muffs, and even earplugs. One of the most significant accommodations from a parental perspective, however, is the creation of a supportive and welcoming environment that accepts audiences who might fidget, make noise during the performance, or even step outside the theatre for a moment.

One of the national pioneers in the creation of sensory-friendly performances is the New York City-based Autism Theatre Initiative. ATI, a wing of the Theatre Development Fund, rents out entire performances of long-running Broadway shows such as Wicked, Mary Poppins, and The Lion King. That its efforts have found fertile ground is hard to dispute; besides the reams of “thank you” letters and comments received by TDF’s Director of Accessibility Programs, Lisa Carling, the organization packs house after house of performances with people interested in attending the theatre in this manner. With many of these NYC performances selling out in less than 24 hours, the model introduced by ATI has even begun following performances away from the Big Apple. Sensory-friendly performances of The Lion King tour in Boston, Houston, and Pittsburgh have sold out some of the cities’ largest theatres.

These efforts are facilitated in part by a fundamental compatibility between CTC’s approach to children as audience members and the environment curated at most sensory-friendly performances. As CTC’s Senior Marketing & Public Relations Manager Melissa Ferlaak explained, “Children have no filter. They make noise, they get up, they run around, and it’s okay. … Our ushers and actors are trained to expect this [already].” Further input from the Autism Society of Minnesota helped refine the company’s model.

Some special actions that CTC takes (above and beyond the normal accommodations for such performances) include having extra staff and volunteers on hand and designating a pair of rooms for those who need to take a break from the crowd or the noise. In a world that often frowns on the use of cell phones during performances, CTC grants this particular audience and free reign for audiences to bring and use the communications devices, support objects, and other materials that they deem necessary. This action is especially important in light of the rise of tablet computers as communications devices for children and adults with severe communication disorders. For those who feel less at ease with crowds, they can also look forward to more personal space than normal, with options to reserve a personal area or buffer seat.

Check back for Part Two of this feature on the Children’s Theatre Company’s sensory-friendly performance of Busytown: The Musical.