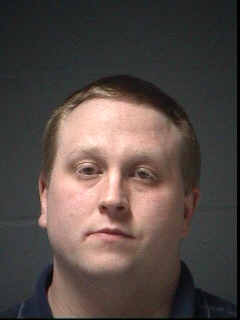 Austin neo-Nazi Sam Johnson, whom Bluestem interviewed during the period he was holding anti-immigration rallied in the Mower County meat-packing town, was sentenced to 15 years in prison yesterday for possessing an assault rifle, the Associated Press and the Austin Herald report.

Since Johnson is a felon, he is not supposed to possess weapons or ammunition.

In Sam Johnson sentenced to 15 years in prison, the Herald reports:

Thirty-one-year-old Samuel James Johnson was sentenced in a St. Paul federal court Wednesday for possessing an assault rifle. Federal officials believed Johnson was amassing weapons and hundreds of rounds of ammunition as part of a plan to attack the government and minorities. . . .

Since at least three of Johnson’s prior felony convictions were for crimes of violence or serious drug crimes, sentencing in this current case was subject to the Armed Career Criminal Act, which mandates a minimum of 15 years in federal prison. Johnson faced a maximum sentence of life in prison.

According to a federal affidavit, Johnson was a former member and Minnesota leader of the National Socialist Movement, a white nationalist group and had gone on to form his own group, called the Aryan Liberation Movement. He once held rallies in Austin.

Ironically, Johnson’s first contact with neo-nazi beliefs came during one of his previous incerations. In an interview with Bluestem, Johnson said that he acquired “white pride” in the Mower County Jail:

Before he went to jail and discovered “white pride,” Johnson said he was an “ignorant man who wanted either to be feared or loved and to have ton of money.” . . .

The new cellmate called Johnson on his behavior and asked him to “Be White.”

Johnson asked more questions about what that meant, and the jailhouse mentor began to share a version of the teachings of Asatru. For most adherents, Asatru is a relatively benign form of northern European neo-paganism similar to Celtic Wicca, but the neo-pagan belief system was co-opted by German Nazis in the Thule Society and adapted over a decde ago by American neo-Nazis seeking a faith that worships gods that are homegrown in northern Europe . . .

Johnson’s anti-immigrant rallies were promoted by the conservative blog True North until Bluestem and other bloggers pointed out that he was a National Socialist Movement leader.

Paul Westrum’s Minnesota Coalition For Immigration Reduction, an anti-immigrant group that seeks to severely limit all immigration to the United States, disavowed Johnson after featuring him in a video on its Youtube channel.

The Rochester Post Bulletin was sketchy about describing Johnson; in some reports, he was an “immigration reformer”; in others, a neo-nazi. Clashes with progressive bloggers and Indymedia led to an invitation for editor Jay Furst to TPT’s Almanac, where Furst and the hosts chortled about how Johnson wasn’t really newsworthy.

Earlier this year, Johnson associate Joseph Benjamin Thomas, who described himself as a “domestic terrorist,” was indicted on drug charges. Thomas had planned to blow up the Mexican consulate in the Twin Cities.

The only source to have photos of Thomas? Indymedia, one of the online sources TPT and Furst so blythely dismissed. Jaime Hokanson had photographed Thomas at a rally in Austin and the infamous Sue Jeffers/Ruthie Hendrycks sponsored “Tea Party Against Amnesty” in November 2009. The rally was punked by prankster Nick Espinosa in the debut of persona “Robert Erickson,” who called for the deportation of illegal and lawless European immigrants who had displaced Dakota people from their place in the state.

In the case of Thomas and Johnson, there might be some merit to that modest proposal.