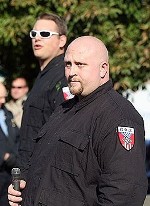 Since 2009, Bluestem has been following the career of Austin neo-nazi leader Sam Johnson, who turned up in our daily reading when he began to protest the presence of immigrants in Southern Minnesota.

Yesterday, the FBI issued a press release noting that Johnson had pleaded guilty to possessing an assault rifle:

Earlier today in federal court in St. Paul, a 31-year-old felon from Austin pleaded guilty to possessing an assault rifle. Samuel James Johnson pleaded guilty to one count of being a felon in possession of firearms. Johnson, who was indicted on April 17, 2012, entered his plea before United States District Court Judge Richard H. Kyle.

In his plea agreement, Johnson admitted that on November 4, 2010, he possessed a .39-caliber, semi-automatic assault rifle. Because he is a felon, Johnson is prohibited under federal law from possessing firearms or ammunition at any time. Johnson’s criminal history includes a number of convictions in Mower County: attempted simple robbery (2000), simple robbery (2007), possession of a short-barreled shotgun (2007), and sale of a simulated controlled substance (2007). In addition, Johnson has a Hennepin County conviction for felony theft (1999).

Since at least three of Johnson’s prior felony convictions were for crimes of violence or serious drug crimes, sentencing in the current case will be subject to the Armed Career Criminal Act, which mandates a minimum of 15 years in federal prison. The maximum sentence is life in prison. Judge Kyle will determine Johnson’s sentence at a future hearing.

Bluestem supports gun rights, but part of the equation for owning guns for protection and recreation is remaining law abiding. Johnson, who can fairly be called a career criminal, was anything but law-abiding, as the litany of his offenses reveals.

The Associated Press reports (via the Rochester Post Bulletin) in Suspected supremacist from Austin pleads guilty, could get 15 years on weapons charge:

An Austin man with suspected ties to white supremacist groups faces at least 15 years in prison after pleading guilty in U.S. District Court on Wednesday to a weapons charge. . . .

An affidavit unsealed earlier this year alleged that Johnson had amassed guns and hundreds of rounds of ammunition as part of a plan to attack the government, minorities and others.

He also tried to recruit others to his cause and actively scouted for a training compound in Illinois and Minnesota, the affidavit said.

Bluestem understands the reportorial convention, but there’s more than suspicions that Johnson has ties to white supremacist groups. We interviewed him in 2009, and it’s not edgy to call him as he sees himself.

However, the AP is to be praised for noting the suspicions of the authorities that Johnson has ties to groups where he has assumed leadership roles. In 2009, the reluctance (or oversight) to do so on the part of local newspapers led to an embarrassing moment for an anti-immigrant blogger at True North.

David Neiwert wrote in The mainstreaming of the radical right: Conservatives run and hide from their culpability in spreading hate:

Political activism at it’s best is honest grassroots efforts by people finally fed up with lying politicians who decide to do something about an issue rather than just complain. We have a great example of that coming up here in Minnesota on the immigration issue.

On Saturday, July 11th at 2 PM, there will be a rally held at the Mower County Courthouse. It’s located at 201 First Street NE, Austin, MN. This will be the second rally in a month at that location.

Basically Austin is a town that the residents feel has been devastated by illegal immigration, and a lone resident, Sam Johnson, finally got fed up. He organized the first rally despite being up against professionally organized counter protests by the likes of La Raza, Centro Campesino and various Marxist organizations bussed in from the cities.

So Sam Johnson and his supporters need your help to rally the people necessary to stand against illegal immigration. South Eastern Minnesota has become a battleground on this issue and the public needs to know that they don’t have to just stand by and let their towns be overrun as a result of apathy from both Washington DC and St. Paul.

You can contact Sam Johnson by email : nsmsoutheastmn -at- gmail -dot- com

Ah, yes. The “honest grassroots.” Read the rest of Neiwert’s post. He quotes one part of Bluestem’s Johnson interview, which will give most readers an understanding of identifying the Austin man as a radical racist isn’t name-calling:

“Minorities should not be citizens,” Johnson said, “only 100 percent true white Americans.” He outlined his vision of a nation in which all people of color would be stripped of their citizenship, no matter how long their families had lived in the United States, and moved to communities that would be strictly delineated according to race.

Only if non-whites broke the law would they be sent back to the country of their ancestors’ origins, regardless of how long their families had lived in the United States. Of course, Johnson emphasized, this would dictate deporting all immigrants living here illegally.

“Minorities could have jobs, own homes, and enjoy their own culture,” he said. They simply wouldn’t be citizens of the United States, nor could they become citizens. They would have to keep separate.

Photo: Sam Johnson in 2009, via Crooks and Liars. Original, Rochester Post Bulletin. Something about him made a few folks suspect he was a neo-Nazi.