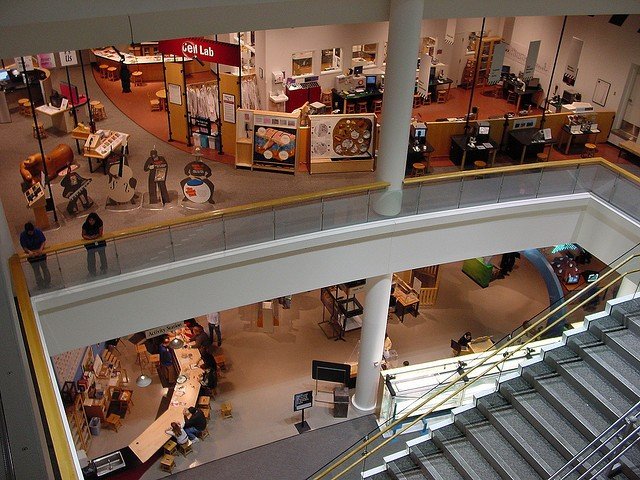 Photo by Jim Moore. This photo is licensed under the Creative Commons Attribution 2.0 Generic License.

Omnifest 2015 isn’t the only thing beginning this weekend at the Science Museum of Minnesota.

Beginning this Saturday, January 10, science, culture and opportunity will meet during the Science Museum’s popular Science Fusion event series. This long-running event series, taking place on four Saturday afternoons in January and February, focuses on the accomplishments of members of the Twin Cities’ Asian American, African American, American Indian and Latino and Hispanic communities in the areas of science, technology, engineering and math (STEM).

During each Science Fusion event, science and education professionals from leading Twin Cities companies will present displays that demonstrate their passion for their work and highlight the contributions they’ve made to science and innovation. Visitors of all ages will get a memorable, hands-on look at the scientists’ areas of expertise in a science fair-style setting that is the perfect atmosphere for in-depth, one-on-one interaction between visitors and presenters.

In addition, eight students from around Minnesota will be formally recognized and awarded the 2015 Donaldson Science Award, which recognizes outstanding student effort and achievement in the STEM disciplines.

The 2015 Science Fusion events are:

African Americans in Science: Saturday, January 10
First celebrated in 1992, African Americans in Science was the pioneer Science Fusion and has become a beloved Science Museum tradition. Visitors will meet science and educational professionals from USDA Forest Service, Boston Scientific, the University of Minnesota Medical School, 3M, the Association of Genetic Technologists, and other organizations, learn about what they do through interactive displays and presentations, and discover the inspiring contributions they’ve made to technology, education, health care, and innovation.

American Indians in Science: Saturday, January 31
Visitors will meet individuals from the Twin Cities’ American Indian communities who have made significant contributions to science, engineering, and education. Professionals from the American Indian Science and Engineering Society, Ecolab, and Mayo Clinic will share their areas of expertise through hands-on activities and dynamic displays.

Asian Americans in Science: Saturday, February 14
Rounding out this year’s Science Fusion series is Asian Americans in Science, an event that invites visitors to meet science and education professionals who represent many geographic backgrounds, from Southeast Asia to the mainland and the Pacific Islands. The presenters, including representatives from Ecolab, Donaldson Company, and the University of Minnesota’s Medical School and Material Advantage, will share stories about their experiences and successes in the science, technology, engineering and math disciplines, and get visitors involved with hands-on activities that relate to their areas of expertise.

Visit www.smm.org/sciencefusion for details about each event as the dates draw closer.

In conjunction with the 2015 Science Fusion event series, eight students from around Minnesota will be formally recognized and awarded the 2015 Donaldson Science Award. The award recognizes Minnesota middle- and high-school students who have demonstrated exceptional achievement in or passion for a STEM discipline, either in the classroom or outside of school. Students are nominated for the award by teachers or mentors, and they are publicly recognized at one of the Science Museum’s four Science Fusion events.

All winners will attend the Science Fusion event for which they were nominated and will join scientists and educators from the community in greeting Science Museum visitors and sharing their activities and interests.

McFarland, a senior at Breck School in Golden Valley, Minn., was nominated for the Donaldson Science Award by her science teacher, Lois Fruen. McFarland was nominated not only for her academic achievement in class, but also for her persistence and determination in high-level mathematics and science courses. McFarland has dedicated much of her summer and out-of-school time to further advance her learning. Most importantly, McFarland has shown much compassion to her fellow peers and displays strong leadership skills to those she mentors.

Taplah, an 8th grader at American Indian Magnet School in Saint Paul, was nominated for the Donaldson Science Award by her science teacher, Erin Fenlon. Taplah has shown personal initiative and curiosity in her science classes. She makes connections to prior knowledge, asks insightful questions, and shows an overall enthusiasm for learning. Taplah enjoys spending time with Lego League and Kid Wind Renewable Energy when class is not in session. When working on group projects, Taplah maintains a positive attitude and a cooperative, team-building approach.

Rios, a senior at Willmar Senior High School in Willmar, Minn., was nominated for the Donaldson Science Award by her teacher, Robert Palmer. Rios exhibits a love for learning and does not limit herself to a single topic. Instead, she has enrolled in as many different science-related classes as possible, and she demonstrates tenacity and vitality in her academics and in all activities outside school. This past summer, Rios participated in the Distinguished Young Women program in Willmar. Rios also volunteers her time helping others learn, grow and further their own goals.

Reza, a 7th grade student at Hiawatha College Prep in Minneapolis, was nominated for the Donaldson Science Award by her teacher, Liz Gilles. Reza has gained attention among teachers at Hiawatha not only for her academic achievements, but also for her “zest for learning and curiosity” in the classroom. Reza has impressed her teachers through hard work, asking questions, and choosing to spend more time practicing new, learned skills. Reza is interested in continuing to study a science subject and someday hopes to “discover new things in the world.”

Reyes, a senior at Cass Lake-Bena High School in Cass Lake, Minn., was nominated for the Donaldson Science Award by her teacher and coach, Matt Wendland. Reyes has received various awards and honors through the school system, but her most outstanding contribution was to campaign for and establish a girls-only robotics team at her school. Reyes’ robotics team encouraged more girls to participate and familiarize themselves with the world of robotics. She is planning to attend college and hopes to study engineering.

Goggleye, a 7th grade student at American Indian Magnet School in Saint Paul, was nominated for the Donaldson Science Award by her teacher, Erin Fenlon. Goggleye has demonstrated hard work in her classes, and her high GPA is a direct result. Her personal interest in science is evident in her participation in the 4H Big Urban Woods group, where she is learning to identify plants and their traditional medicinal uses. Goggleye eagerly seeks new educational opportunities and, as an elected middle school ambassador, she looks forward to sharing her culture and knowledge with others.

Bialke, a junior at Blaine High School in Blaine, Minn., was nominated for the Donaldson Science Award by her teacher, Jennifer Birkmeier. Bialke’s success in science and technology was evident in her 9th grade year where she participated in the Internet, Science and Technology Fair, was selected as a guest for the Grace Hopper Women in Computing Conference, and participated in the Verizon App Challenge, where she won Best in Minnesota with her team. Bialke is gaining attention in the Center for Engineering, Mathematics and Science (CEMS) at her school, and she shares her talents and knowledge with others by tutoring on a weekly basis. Bialke plans to attend college and study aerospace engineering, computer science, or astrophysics.

Nichols, a 7th grade student at Laura Jeffrey Academy in Saint Paul, was nominated for the Donaldson Science Award by her teacher and mentor, Jennifer Schiller. Nichols has demonstrated her love for technology through various school projects and has created her own website, participated in a worldwide app inventor competition, and contributed to the creation of an app that addresses sexual assault in local communities and in society. Nichols has also envisioned a business that connects dogs with people who need a companion. Schiller describes Nichols as innovative and determined. She sees herself in a technology-related career someday.

The Science Museum of Minnesota has a 107-year history of bringing science learning to life through hands-on exhibits, giant screen films, and unparalleled educational opportunities for all ages. For museum information, call (651) 221-9444 or visit www.smm.org.