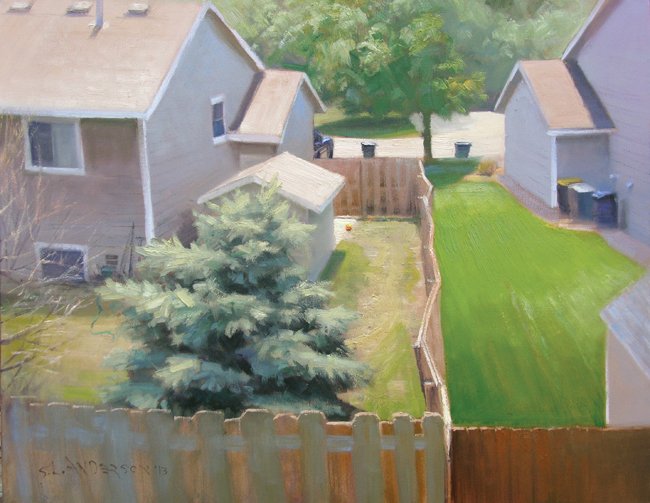 I recently saw Scott Lloyd Anderson‘s exhibit entitled Paradise Paved at the Douglas Flanders & Associates Gallery in Minneapolis. Scott Lloyd Anderson has been painting full time since 2001. Before that, he spent 22 years as a magazine designer. Mr. Anderson prefers to spend the bulk of his creative time outdoors, painting “en plein air.” He often tries to complete his smaller paintings in a few hours, before the light has drastically changed on his scene. In Paradise Paved, the soft focus and rich color found in many of Anderson’s works here relate back to what the Impressionists invented in a general sense. But more specifically, in this exhibit Anderson focuses on the mundane.

Painter Gustav Courbet, who Anderson mentions in his exhibition statement, was one of the first artists to make unusual, even “ugly” subjects his specialty. At the time (the mid-1800s), this was unheard of. But Courbet’s example inspired the Impressionists to choose their subjects freely. And over time, other artists (notably the New York-based “Ashcan School”) turned their eyes to “common” subject matter and tried to make it come alive. It’s an alluring idea, and certainly a challenge. Anderson frames these ideas for a modern audience when he asks: “Is it possible to paint a compelling picture of a Best Buy parking lot?” I think he asks the question bluntly in order to indicate the level of challenge he has undertaken in this exhibit.

The easy answer to his question is, of course, yes. It is possible to a paint a good picture of anything when you’re as talented as Mr. Anderson is. He’s capable of pinpoint, detailed realism, as well as abstract playfulness when the light demands it. Anderson chooses some scenes based on their abstract compositional harmony, in order to create a visually satisfying picture. One such example of this inspiration is his piece entitled “Blue Sign,” which, at its core, intentionally emulates an abstract painting by Piet Mondrian.

Realism can be a double-edged sword. A scene that doesn’t initially resonate with a certain viewer probably never will, no matter how accurate the light or how beautiful the shadows. This is foggy emotional territory, and it illustrates the subjective nature of art. For example, “New Extended Hours” (with its expert indication of a low winter sun angle, and softly painted yellow sports car) is one of my favorites in this show. But if you’re someone who’s spent a lot of time waiting in car repair shops recently, you may recoil from this piece. On the other hand, if a different scene does resonate with you, you’ll be inclined to look closer. The principle I’ve just outlined probably explains why I’m most drawn to Anderson’s summery paintings. In addition to “Backyards,” “The Houses on the Hill” stands out for me. This is because I love midsummer, midday light. And the artist has captured it well enough to make me feel that warmth.

I’m most intrigued by certain possibilities I see in Anderson’s exhibit; certain small clues to the boundaries of his artistic vision. I’m curious as to where he may push those boundaries in the future. For example, a recurrent theme in this collection is SNOW, a colorless blanket. That’s an exciting visual theme, right? But his solution to the “problem” of representing snow is to sometimes abstract it. Small abstract touches like the Van Gogh-style brushstrokes in “Blue Rambler (Red Car)”, and the brushstroke footprints seen in “Footsteps” bring almost a third dimension to those scenes. I was also taken by the tiny, seed-like piece entitled “Parking Lot, February.” Here, Anderson may have been simply trying to find a dead-looking, dark place in order to challenge himself. But for me, this small scene stirs up feelings of mystery and even film noir. I would love to see large versions of dark, even dank scenes like this. I think they could interact with viewers on a universal level. Scenes like this let the viewer imagine their own story. And that’s the kind of magic Anderson is aiming for, I think. See the show before it ends on July 4th.

There’s also a rich history of the Flanders Gallery, which I was embarrassed to discover because it’s a place I should have known about for a long time. The Gallery has existed, in various Minneapolis locations, since 1972. It now resides at 818 W. Lake Street (near the Bryant Lake Bowl). Its proprietor Douglas Flanders has many impressive connections to various legendary artists and galleries. He’s a friendly man with a good sense of art history and the business of art. Mr. Flanders and his gallery certainly warrant a review of their own. For the time being, suffice it to say that this gallery is a special place, and most definitely worth a visit.