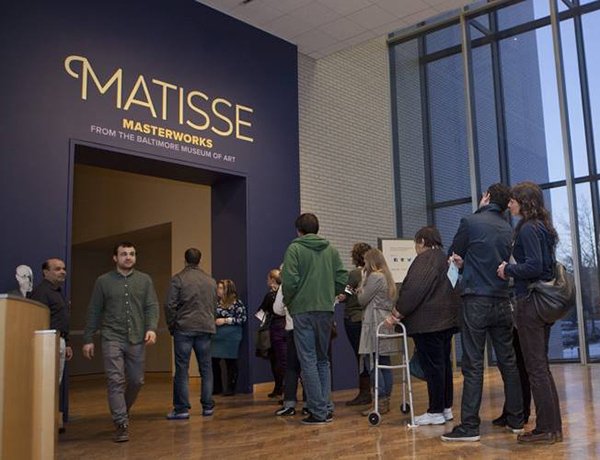 I recently attended the exhibit Matisse—Masterworks from the Baltimore Museum of Art showing now at the Minneapolis Institute of Arts.  Most of the collection originally belonged to the Cone Sisters of Baltimore. These unique ladies were truly on the cutting edge of art appreciation. The sisters were friends of the Stein family, which included the historically important author Gertrude Stein. = Gertrude Stein was an important friend and mentor to many artists, including Picasso. It is staggering to consider Stein’s contribution to early feminism. And it’s interesting to realize that the Cone sisters (as female art collectors at the turn of the century) must have been powerful trailblazers as well. They were undoubtedly ahead of their time with their keen eyes for art. They first met Matisse in Paris in 1906.  While he would become incredibly successful during his lifetime, he was relatively unknown at the time.

The exhibit is deftly organized into a blend of historical periods and thematic elements. Viewing the exhibit, one is struck by the feeling that Matisse’s career is something more than the sum of its parts. When presented together, and organized thematically, the separate works feel like one large installation piece. Matisse is famous for having been the (unofficial) leader of “The Fauves.” They were a loose collection of like-minded artists who first gained notoriety after their works were shown together in 1905. Their work was shocking to critics at the time, who nicknamed the artists “Les Fauves” (translated as “The Wild Beasts.”) The Fauves’ reacted to Impressionism by consciously deciding that they no longer needed to focus on nature as a subject. More importantly, for them, art was not about the subject of the painting, it was about the painter’s individual expression. Color was extremely important to the fauvists, but they never lost sight of the fact that color was merely a tool. Following this philosophy, it was natural for Matisse to paint green-faced portraits of women, for example. This was scandalous at the time, but Matisse pioneered this flexible way of thinking.

You won’t find the green women in this exhibit. And frankly that’s interesting. After all, bombastic color put Matisse on the map, but for him, composition was equally important. This exhibit excels in illustrating Matisse’s expert compositional sensibilities—particularly his compositional process. In many cases, preliminary sketches are shown alongside finished paintings or figurative bronze sculptures. Sculpture is a crucial inclusion because Matisse viewed painting and sculpture as directly related. One gets the feeling that whatever the medium, Matisse is expressing the same thoughts and emotions.

Matisse moved to the city of Nice, in southern France, around 1917. While working there, he became less interested in “loud” fauvism, and more interested in themes of pictorial harmony and the interior space. Matisse often viewed interior spaces as a template, or as a canvas within the canvas. This exhibit offers plenty of good examples of this time in Nice, particularly “The Yellow Dress,” painted between 1929 and 1932. This 3 to four-year time frame for one painting demonstrates Matisse’s thoughtful and painstaking approach to painting: The finished product often looks very natural, but this was often the result of many re-workings and much deliberation.

One of the most recognizable pieces in this exhibition comes from 1935, painted when Matisse was Sixty-Six years old. Entitled “Large Reclining Nude,” it is a stylized, elegant painting of a pinkish figure. Monumental, yet breezy, it could be a painting of a sculpture. Looking at this work, you get the feeling that Matisse’s years spent wrestling with various mediums had finally produced within him an incredible natural facility with composition and color. The piece is a good example of Matisse’s near-universal accessibility and his decorative popularity. Works like this are almost akin to Warhol paintings- they look cool on postcards, but they’re powerful in museums. The piece hints at the vast freedom of the purely abstract period which came near the end of his life. The “End of Life” portion of the exhibit includes a wall-sized photograph of Matisse working in his studio while sitting in a wheelchair. It’s an inspirational image: True artists never really slow down. Their minds are ablaze with ideas, well into old age.

While studying art, I always like to find lessons from the past which are still fresh today. Often times when I walk through an art museum I see inventions, not artworks. In the case of this exhibit, I’m reminded of Matisse’s crucial realization that sometimes color IS structure.  In simpler terms, a scene which looks dull in blue may come alive when done in red. Artists take this for granted today—it’s simply considered “artistic license.” But that’s only because Matisse paved the way. See the exhibit before it ends May 18th.