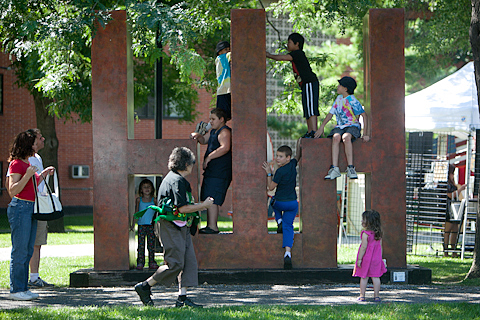 I’m enormously proud of our strong arts coverage, and given that there are so many hours in a week, I’m changing the format of this weekly newsletter so that I can spend less time compiling it and more time bringing our coverage to you in a timely manner.

Arts Orbit Radar will continue to feature “on the radar” and “under the radar” event picks—now in a pick-five format—but it won’t feature an arts news roundup any longer. You can see all our arts news compiled on our arts section page, along with the weekly event picks. In addition to our weekly columnists, our Arts Orbit Radar e-mail newsletter will now include teasers for some of our top arts stories of the week. If you’re not already a subscriber, you can sign up here to receive that weekly e-mail!

1. When its cast was announced, I called Walking Shadow Theatre Company’s reasons to be pretty my most-anticipated show of the season. It opens at the Guthrie Theater this weekend.

2. The one thing the Twin Cities arts scene didn’t need, it seemed, was another major film festival. Well, last year the organizers of the new Twin Cities Film Fest proved that wrong. This Tuesday, the festival returns in triumph.

3. There’s legitimate complaint that the Twin Cities dance scene is underappreciated, but that’s not something that can be said about our theater scene—especially when the State Theatre rolls out the red carpet for the annual Ivey Awards.

4. Longtime WCCO newsman Don Shelby is living a good life: he wrote a book, he’s taking selected journalism projects that are meaningful to him, and he’s co-starring in a stage production of The Rocky Horror Picture Show. If retirement’s not going to be about hookers and blow, you can’t really do much better than this.

5. Everyone I’ve talked to thinks Cavalia is a Cirque du Soleil show. It’s not, but it flows from the same stream: creator Normand Latourelle was a Cirque co-founder. A flock of wild horses come galloping into the big top in St. Louis Park (the glamour!) on Wednesday night.

1. Jon Ferguson, the gifted local playmaker whose Jon Hassler Theater production of The Legend of Sleepy Hollow was one of my favorite shows of 2010, returns to Plainview with a new adaptation of Pinocchio.

2. In a happy collision of two underpublicized local arts assets, the online publication Quodlibetica hosts a forum Sunday evening at the relocated Art of This Gallery: “Art and Design Mis-Education.”

3. “Do you think she remembers that I panned her big show?” I asked my friend after officially meeting Emily Johnson for the first time at the Cowles Center opening. Even if The Thank-You Bar wasn’t to my taste, there’s no disputing that Johnson is a choreographer and performer of great vision. On Saturday, Johnson’s previewing her new “dance installation” at the Southern Theater.

5. “He is to Jewish blues what Matisyahu is to Jewish reggae,” says the press release announcing Saul Kaye’s Thursday gig at the St. Paul JCC. Need I say more?