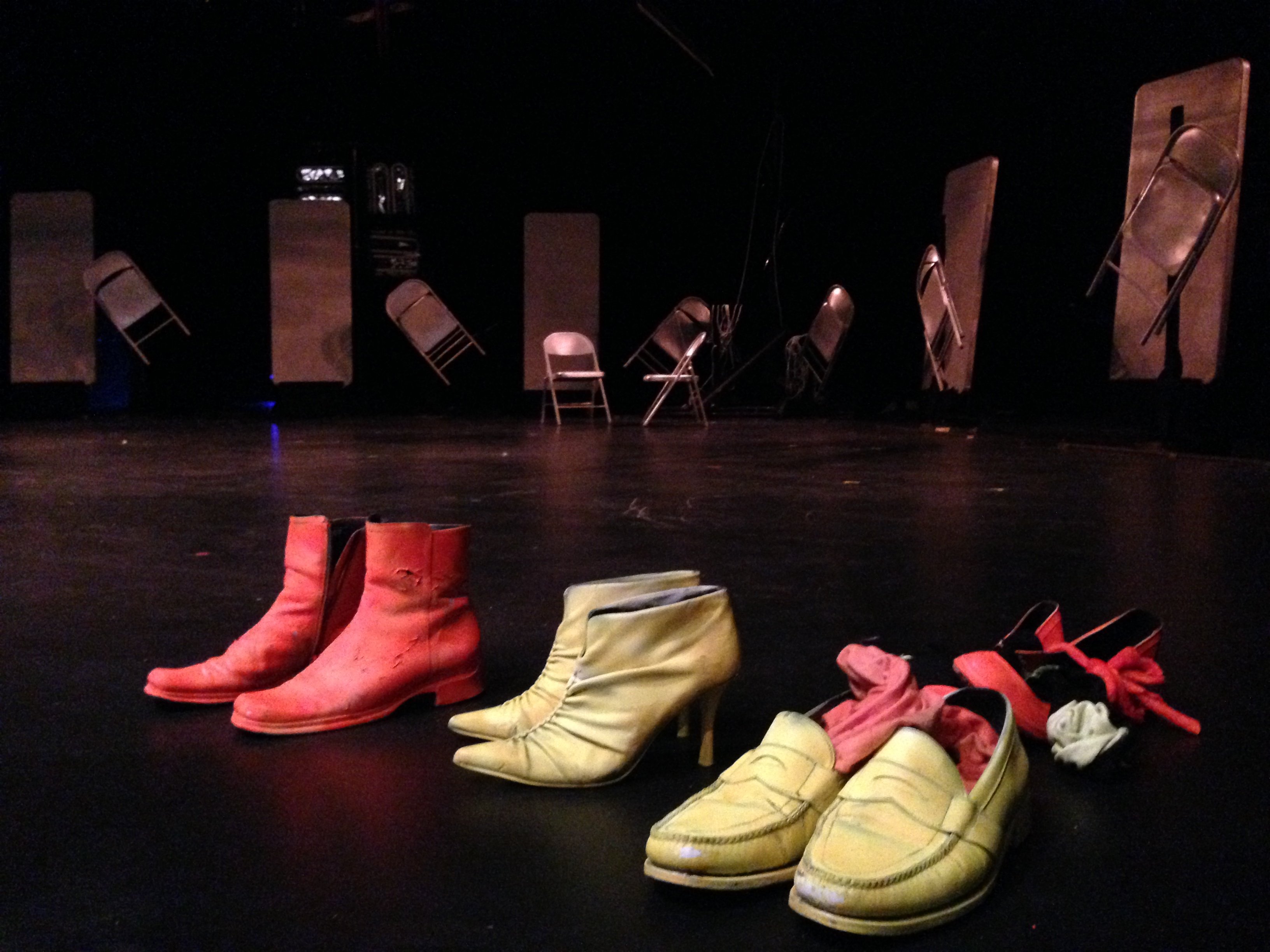 Off-Leash Area’s revival of their 2009 Maggie’s Brain uses dance, words and scenery to viscerally capture the cacophony of noise and chaos that is going on in Maggie’s (Taja Will) head. Off the bat, she is depicted as confused, with forays into communicating somewhat normally with her family at the dinner table. The odd behavior is reframed and redefined for the viewers by a skillful rewind and reboot of the dinner table scene. “Maggie, dinner’s ready” and it starts over, the second time with the physical embodiments of the voices in her brain following her around, depicted in colorful fluorescent costumes. The whole scene replays with her tormenters communicating into her ear/head. What looked like disturbed communication now has reason: a form of mental illness, ostensibly schizophrenia.

Each of the five actors (Elizabeth Henderson Shreve, James Kennedy, Jim Lieberthal, Ashleigh Penrod, Jesse Schmitz-Boyd) take on very distinct characters—the gay heckler, the skinny bitch, the Mohawked punk, the stripe-shirted ref and the pining lover. They are not to be mistaken for multiple personalities, they are just the voices in her head. They coexist even if they don’t really interact with one another. One ploy to control them is when Maggie draws a line with bright orange masking tape. Maggie’s attempt to control the voices is completely misunderstood and the tape is unceremoniously removed by her mother.

The initial set is a metaphor for her brain, and the string delineated doorways around the back serve as entrances and exits as a metaphor for her brain. Longer stretches of dance on and around tables sometimes look like coffins, or beds, or, display tables at the same time. The tables and chairs stashed carefully on the side of the set seem to float when they are in place on their racks. The area is supposed to represent her synaptic world. The doorways eventually fall away, the family struggles with dinner, Maggie struggles to cope and descends into a darker place—all with the distracting influence and mischievous mixings of he five embodied voices. The discomfort, confusion and inability of her family to cope fills their every interaction.

Going back to my previous posts about other kinds of devised theater, here there is a mixture of spoken theater and dance that combine seamlessly as the performers embody both the characters and their movement driven raw emotional versions of themselves. This story evolves from Choreographer and co-Artistic Director’s Jennifer Ilse’s personal life. Prompted by a neighbor who said she should do a piece on mental illness, she dug into her personal experiences with her older brother to create much of the scenes and storyline. The works have a strong visual component that drives the process forward. The collaborative freedom is given to the performers as they develop their characters. Before beginning rehearsals they will have a clear storyboard of a plot timeline to work with and thumbnail ideas for how it should look.

So is this dance or is this theater? The scale tips more towards dance, but the devised and creative process by which it was made falls somewhere in the middle. Keep checking back, an interview with Paul Herwig and Jennifer Ilse will follow and at the end of the summer the company will be doing a Garage tour, performing their next piece in neighborhoods where individuals have offered up their garage space for the performances.