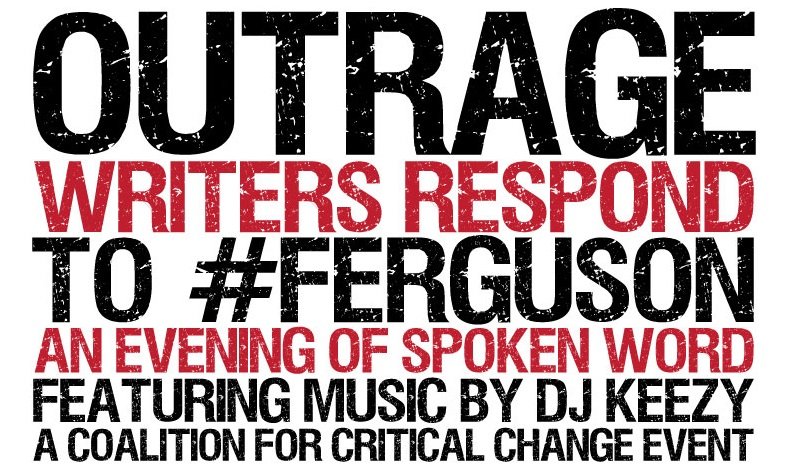 After Minneapolis poet David Bayliss witnessed the Ferguson riots on television earlier in August, he felt the need to express his outrage through his art. Now he wants to give other local artists a chance to do the same.

This Sunday, Oct. 12, Bayliss and about a dozen local and national artists are hosting a night of performances at Patrick’s Cabaret in south Minneapolis. OUTRAGE: Writers respond to Ferguson aims to provide an official space for local artists to share their reaction to the ongoing racial tension re-sparked by the shooting of an unarmed Black teenager in Ferguson, Missouri earlier this summer. The event is co-sponsored by Patrick’s Cabaret.

“I had this energy that I just needed to get out there. I had these things I needed to say,” Bayliss said. “After that, I realized that I’m sure I’m not the only artist in the Twin Cities who is having this reaction to it.”

It’s shocking that the United States is still facing similar kinds of racism almost 50 years after the Selma-to-Montgomery voting rights march of 1965, he said, and this event shows that the Twin Cities arts community is feeling a shared outrage over it.

Bayliss sent out an open call for artists more than a month ago, he said, and the response has been fantastic.

“We have a diverse set of artists. Spoken word artists, rappers, poets. So, it’ll be a tremendous event,” he said.

Around 14 artists have signed up to perform at the event. Some highlights include Chicago rapper Longshot, New York poet Anya Achtenberg and local poet Mary Virginia Cooley. There may even be a special guest appearance from local spoken word artist and rapper Guante, Bayliss said.

The event is also a way to bridge the diverse artist groups here in the Twin Cities, Bayliss said. Often, the local arts scene is compartmentalized by boundaries of race, age and location, he said, and this event is helping to bring those communities together over a shared belief.

“We have a lot of poets, a lot of writing communities around,” Bayliss said. “But often times, they kind of stick to their own side of the tracks.”

The event is free, he said, but donations are encouraged and the proceeds will go to the legal defense fund in Ferguson to help pay for the legal costs some of the protesters there have incurred.

To Bayliss, the response to this event has also showed him that the Twin Cities arts community is very sociologically and politically aware, he said.

“We don’t see ourselves as just being alone in our expression,” he said. “You can go to any artistic community here [in the Twin Cities] and find that there are folks who see what they are doing engages them in the world.”