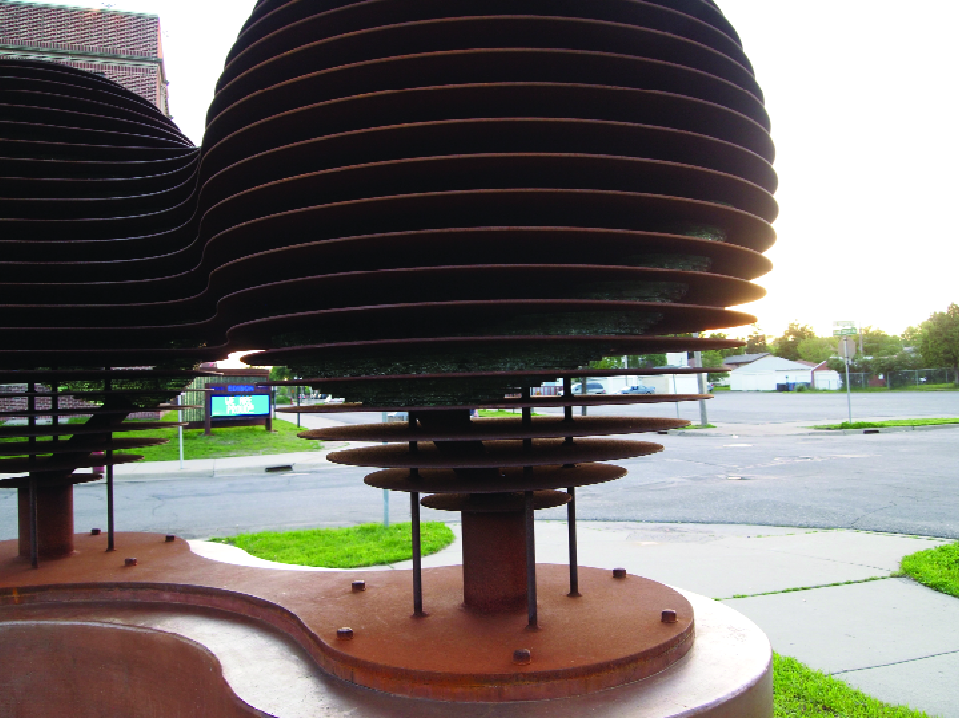 Through the Double Flux, one can see the monument sign and the proposed site for the next project, the Edison parking lot corner. (Photos by Margo Ashmore)

In a world careening toward making donations just by mouse clicking, the Medallion Public Arts Connector project deliberately clanks in the opposite direction, with heavy metal icons and their collectors parked at physical businesses.

The proceeds benefit public art, piece by piece, and the random conversations that will surround the person-intensive medallion exchange are meant not only to promote the art, but conversation on anything else that two or more people want to talk about.

Facebook photos feature individuals and groups turning in medallions and spending money at Jax, 612 Brew, and Red Stag, to name a few.

“Medallion No. 81 has reportedly made its way to Mother Earth Gardens on the Southwest corner of Stinson and Lowry. Apparently, you can plant bulbs as soon as the soil warms with a ‘dibbler’ tool and you’ll have beautiful lilies blooming mid-summer. More dibblers available!”—another post.

It started with community iron pours quite a few years ago. Artist James Brenner came to Jackson Park, 23rd Avenue and Jackson Street NE and showed people techniques to shape their molds. They were able to see how their work translated into metal objects. He worked with them on the verbiage around the “In Flux” sculpture that changes glowing colors from an LED array at the center.

Brenner said the type of steel used in the art mirrors what was used on the bridge across the basin that was built to help stave off future floods and now serves as a great place to watch movies in summer.

Later, Brenner fabricated the Innovation backstop for the ball diamond in the park, a monument sign for Edison High School across the street and “Double Flux.” If a CEE (Center for Energy and the Environment) Art as Energy grant for which he’s a strong finalist gets finalized, Brenner, Holland Neighborhood Improvement Association, Edison and all their partners will be well on their way to another project, on the remaining corner of that intersection. More, in a future Northeaster. 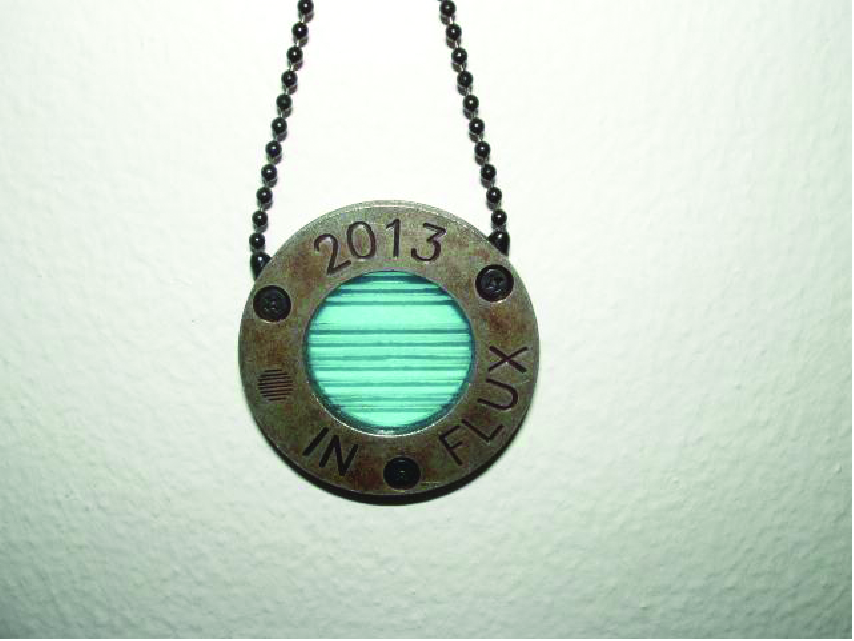 How does the medallion project work? For much detail and individual stories, go to the Facebook page where the “cover photo” is the logos of participating businesses. Shop at one of those businesses, turn in your medallion, and either 10 percent, two dollars, or some other pre-determined amount will be contributed by those businesses to the next public art project. It is a project of Holland Neighborhood Improvement Association, but not limited to Holland’s geography.

Businesses collect and display medallions on one of many maquettes (small replicas) of the In Flux orb until one of the organizers comes in to take the medallions and money.

The medallion will be returned to you to be used again, how? Kurt Nowacki, a real estate agent and neighborhood activist, said he and others devoted to the project will take zones or routes along their usual paths, and drop them off at residents’ doors and porches. Or they’ll recruit kids on bikes, or if all else fails, mail. That’s how they might handle the one that came from a Saint Paul resident.

It’s the very clunkiness (though he didn’t use that word) that makes people stop and think about the cause, and community connections, Nowacki said. Every stop on the route is a conversation opportunity to get people out of their cars and on the ground observing and interacting with their community.

The medallions are stamped with unique numbers. Edison High School students and community members helped patina the metal and assemble the parts.

“Great to hear Medallion No. 506 traveled from St. Maron’s to the NE corner of Northeast and back to Maya Cuisine at 1840 Central Ave NE. For those who haven’t met Maya owners Victor Martinez and Isela Perez we hope you can stop in and thank them for participating! …bring a friend and have dinner!”—posted on the Medallion Public Arts Connector Facebook page.

I had lunch at the Modern a while back and not only forgot to bring my medallion, but had lost the instruction sheet passed out with it at the Hotdish Revolution where Holland kicked off the program. So I had to old-fashioned pick up the phone and call Kurt Nowacki for the details. Guess it’s working pretty well.

To get a free medallion, contact Nowacki at 612-227-6163, inquire through the Facebook page “Medallion Public Arts Connector” or one of the participating businesses. 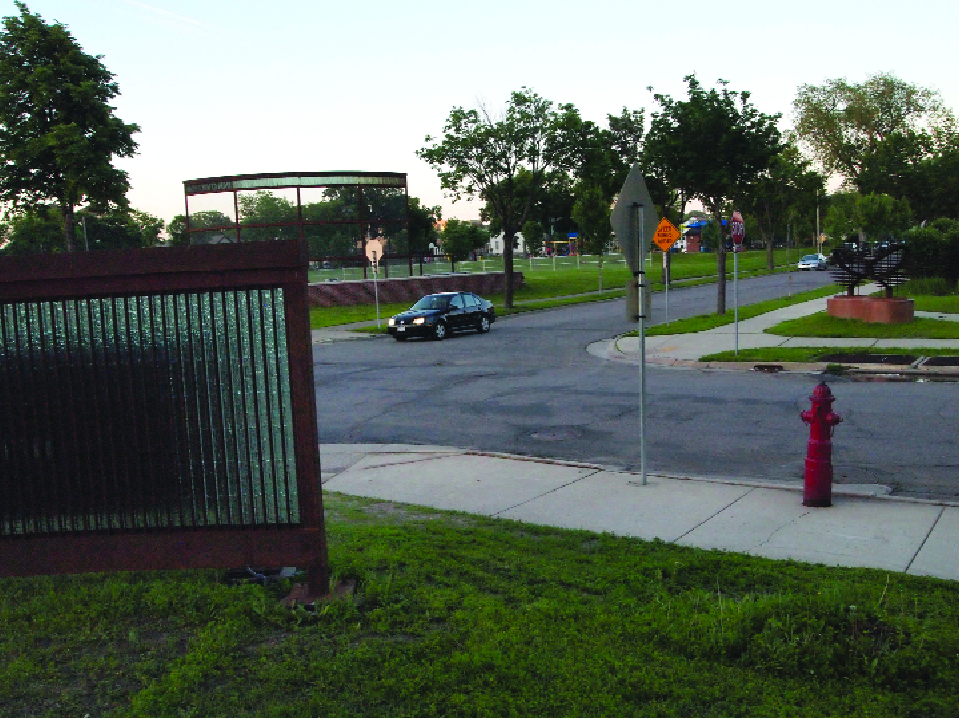 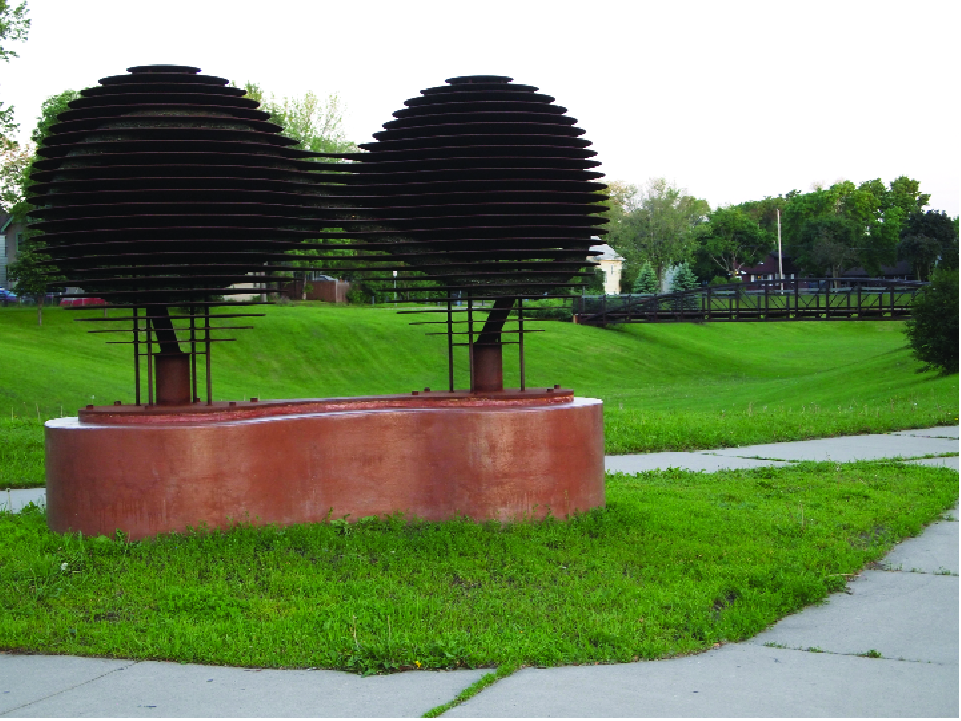 In the distance, the bridge over the basin that inspired James Brenner to use Coreten or “weathering” steel for everything.