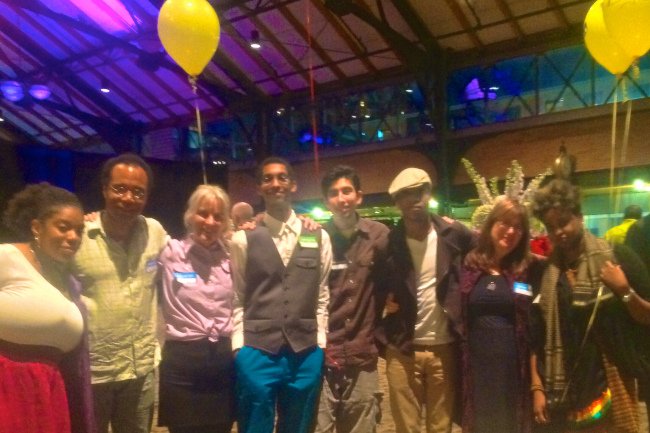 Last night I joined a group of Saint Paul Almanac writers participating in a collaborative art project that was conducted during the “The Art of Collaboration” reception at the Minneapolis Depot Pavilion. The event opened the annual conference and celebration of the 25th anniversary of Local Initiatives Support Corporation (LISC). Community development advocates from all over the nation were in attendance to celebrate their work “dedicated to helping community residents transform distressed neighborhoods into healthy and sustainable communities of choice and opportunity — good places to work, do business and raise children.”

The writers were part of a team assembled through Springboard for the Arts to work with lead artist Witt Siasoco. Our job was to roam the party and greet attendees asking them to share just a few words about home, community and neighborhood. There were other artists present working with folks in the crowd to create drawings of the houses and buildings they actually live in. The answers compiled by the writers were passed on to Witt to be combined with the visuals and used to create a permanent work of art for the local LISC offices in Saint Paul. (To be completed in 2014.)

The writers had come up with a conversational prompt to use during the party, ”I come here from ____.” We had bright yellow story boards and even name tags for people to fill out. The challenge was to take responses beyond the name of a city or town and into the realm of the prosaic. We worked with a list of phrases developed by our colleague Nimo Farah to help people dig deeply for their thoughts about where they come from. Nimo suggested that people think about places in terms of sounds, joys, hopes, stories, fragrances, tastes, dreams, defeats, colors and more.

Tagged with bright balloons, we mixed and greeted new people. So many of the folks I talked with answered the question in terms of what brought them to their LISC-related work in community development. I talked with people from the Twin Cities, New Orleans, Pittsburgh, New York City and Des Moines. Many of the people mentioned the experience of growing up in communities with a strong sense of identity. For some it was ethnic, “I come from a mini version of My Big, Fat Greek Wedding,” “I come from Rondo in Saint Paul.” For others, it was their neighborhood parish or faith community that gave them a sense of belonging. For one woman, it was the local sports team that gave her a sense of place, “We had a lot of spirit for the The Pittsburgh Steelers.” One man said he comes from “a farming community,” even though his family worked in town and didn’t farm. Many people said they come from parents who were role models of community-minded, philanthropic people. Others mentioned the role of college and early career experiences working with people in forming a direction for their work. As one woman put it, “I come from listening to our clients.” 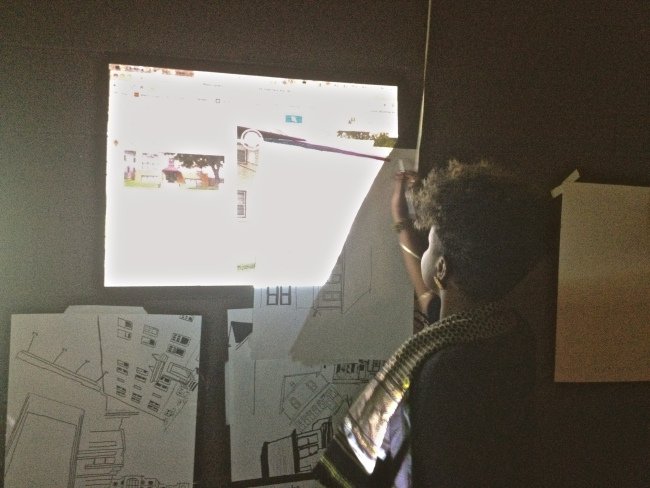 We filled out dozens of bright yellow story forms and filled a wall with the stories we gathered. It will be interesting to see how they will be integrated with the visual impressions Witt Siasoco and his team gathered. They invited folks to sketch over a projection of their house onto a piece of paper. The houses were located on Google Earth and the street photo was enlarged. As each house was sketched, the paper was rotated and a new space was created for a drawing. The product was an interesting mosaic of houses rotating from a center almost like points on a star.

Kimberly Nightingale, executive director of the Saint Paul Almanac, points out that increasingly artists are being invited to work with organizations such as LISC, which are thought of as “bricks and mortar” funders. She says that now such organizations “are focusing on the power of artists and art to make change in communities.”

“Creating or experiencing art can give people a fulfilling sense of personal power. We all have something to say about the world, and art helps us find our voice. It can also help us find each other. Arts activities provide valuable opportunities for people to gather and interact. Personal power gained through art can become community power, and collective action that results from that power can be transformative.”