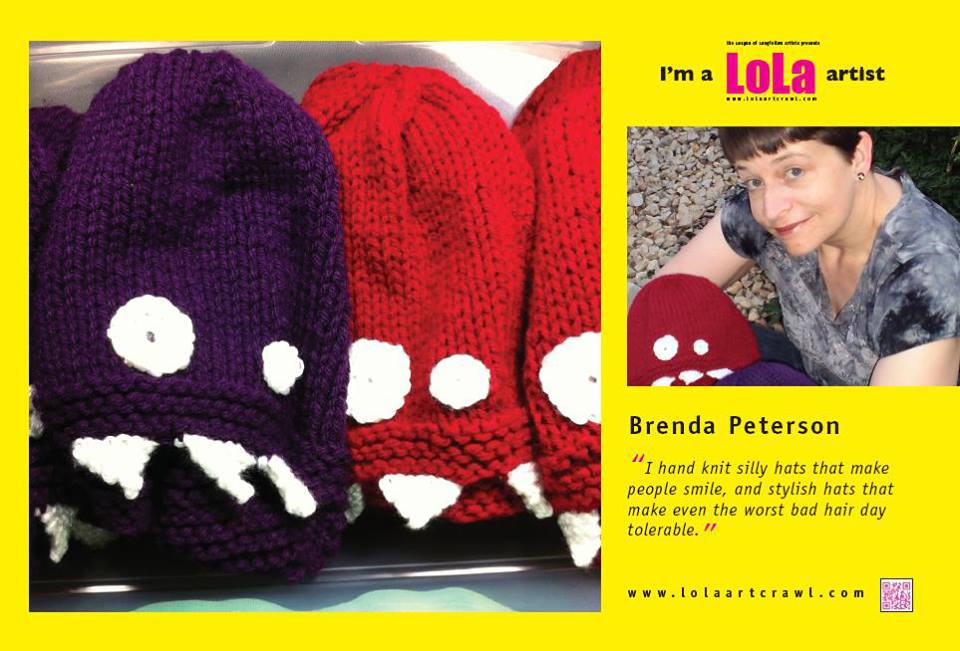 Brenda Peterson, is the crafty gal behind Mellow Fury, a local business selling knit hats of all varieties – monster hats, sci-fi inspired hats, and slouch beret hats to name a few. She also is the voice behind LoLa’s (League of Longfellow Artists) Twitter feed and Facebook page. We talked to Peterson about how she got started, what inspires her, and how she keeps up with all of the artists in Longfellow.

1. On your Etsy shop you’ve got monster knit hats, Star Wars hats, slouch hats, and hats with lots of colorful stripes. Can you tell us a little bit about what inspires you for the different hats you knit?

I actually rediscovered knitting a couple of years ago in order to make myself a very specific hat. I’m a fan of the short lived, but much loved, television series Firefly, and I want to make myself what has been referred to as a “Jayne Hat”-which is a distinct yellow, orange and rust knit ear flap hat with a pom pom on top…. It took me a few attempts to remember how to knit again…. After a few unsuccessful attempts, I made one that I was happy with, knit them for a few close friends, and then I realized that I had rediscovered a hobby that would very soon turn into much, much more. 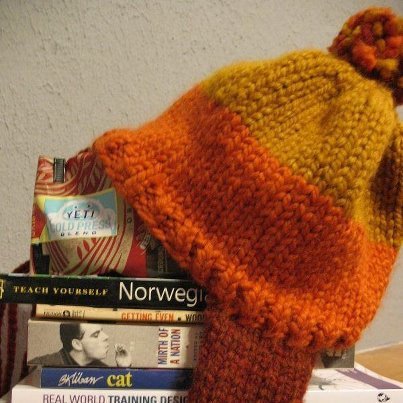 Initially, I created hats to help fans of sci-fi shows and comic books become a part of their favorite shows…. One branch of my work is inspired by fandom and those interested in connecting with the stories that they love by helping to bring those stories to life.

I realized quickly that I enjoyed knitting different kinds of hats. Much of what I make is inspired by someone saying, “You know, I just can’t find a ______ hat that I like.” 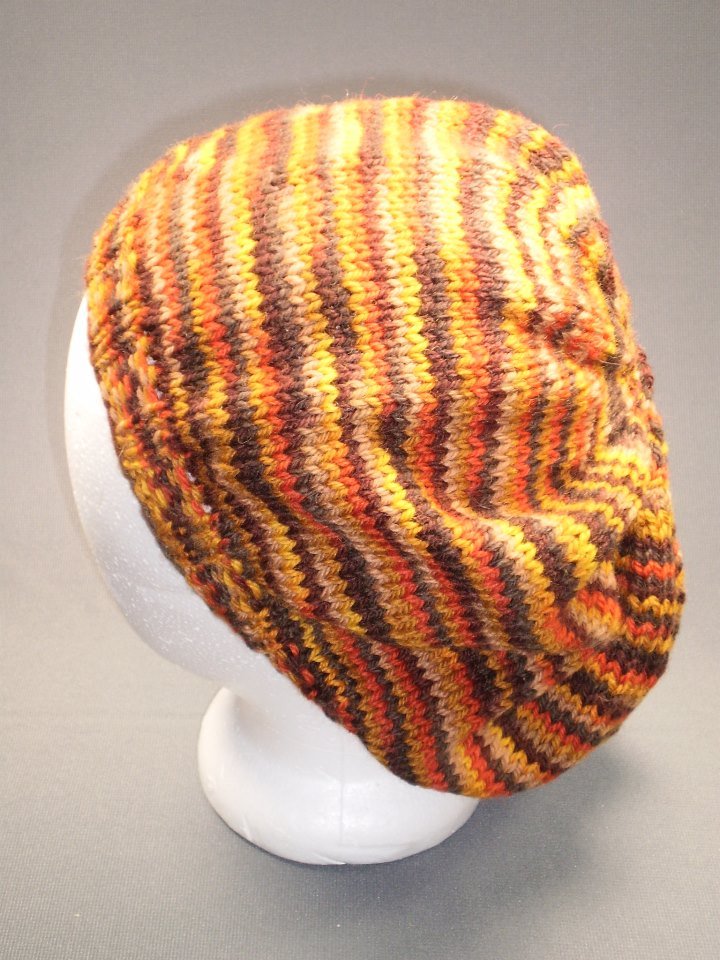 The monster hats came about a couple of years ago when I noticed quite a few children’s sized animal hats. I thought I wanted to make something similar, but I wasn’t necessarily sure what type of an animal I wanted to depict. One day I saw a shark hat that appeared to be eating the child’s head (the teeth facing downward). Another day, I ran across different monster hats with a variety of colors and facial features. Based on a basic hat pattern I had, I started experimenting. My art and craft show roadie and main hat model (my daughter Wynn), also helped me to figure out what seemed to work and what I wanted to change. Over time, the Crazy Eyed Monster Hats were born. I think it’s all just an ongoing experiment of what designs and colors catch my eye. I even manage to knit things for myself on occasion!

2. Do you primarily stick to the knitted world, or do you work in other mediums as well?

Predominantly, in the art and craft world, I am a knitter. Occasionally, I do work in tie dye, including creating upcycled tie dye clothing. 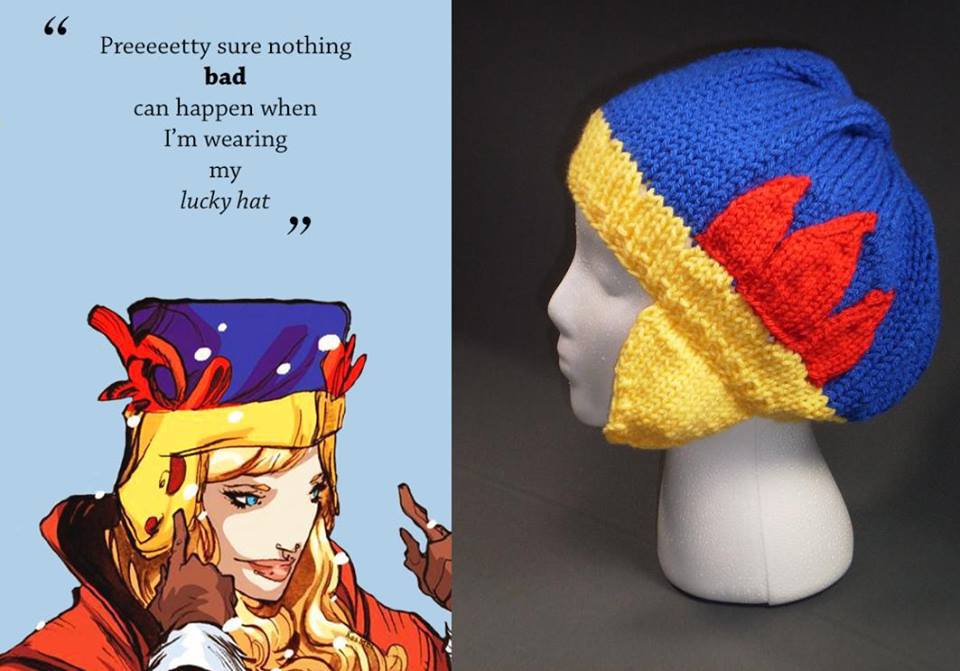 One of Peterson’s hats based on the comic book series Captain Marvel. (Image courtesy of Brenda Peterson)

When I was growing up, my mom (Gerry Peterson) worked at The Needle Nook, an independently run yarn and craft shop in my hometown of Viroqua, WI. She taught knitting and crocheting classes, and was constantly knitting and crocheting mittens and baby afghans for everyone in the neighborhood…. When I was in elementary school, she taught me how to knit, and I did it while I was in elementary school and a bit into high school, often exhibiting knit items at the Vernon County Fair. After high school, I stopped knitting. In 2011, I finished my master’s degree and realized that I needed to shift gears a bit. At that time, I also wanted to make a very specific hat, so I went back to my original knitting teacher, my mom, and she helped me get started again. After a few tries, I created that first hat, and I just kept on going. Now, it seems very odd if I don’t spend at least a little time knitting each day.

I enjoy knitting because I find the act of creating things therapeutic. In a world where often my work day’s accomplishments include things like “went to a meeting” and “sent a few emails,” it’s nice to spend a few hours knitting and have something colorful and fun that I can point to and say, “Hey—look what I made!”

4. You’re also the voice behind the LoLa (League of Longfellow Artists) Twitter feed and Facebook page. How easy or difficult is it to keep up with all of the goings-on with Longfellow artists?

This year, the LoLa Art Crawl had 153 participating artists, so it is definitely a challenge to keep up on each artists, their current body of work, and their upcoming events. Many artists drop me a message when they have a show coming up so that I can help them get the word out. I’m also proactive by subscribing to newsletters by many of the LoLa artists, following them on Twitter and Facebook, and just keeping my eyes open for LoLa artists when I’m out and about. I enjoy being part of this community and helping other artists.

5. How do you think LoLa has influenced the neighborhood art scene?

[Lola] is so much more than just an art show…it is a group of fellow artists who are also our neighbors…. I find it nice to know that we can share art opportunities and help one another to learn and grow artistically and professionally. I also enjoy the role of being an artist and having a leadership role within the LoLa organization. I enjoy being able to help shape LoLa to be an event that reinforces the role of artists in the Longfellow Neighborhood, and strengthens each individual artists as well.

Where to Find Peterson’s Work

Find Brenda Peterson, crafty gal at Mellow Fury, on Etsy at www.mellowfury.com, on Twitter @Mellowfury, and Facebook at facebook.com/mellowfury. Her wool and wool-free slouch beret hats are available at the Art Shoppe at the Midtown Global Market. Starting in October, her crazy-eyed monster hats for both babies and children/adults will be available at Paper Hats.