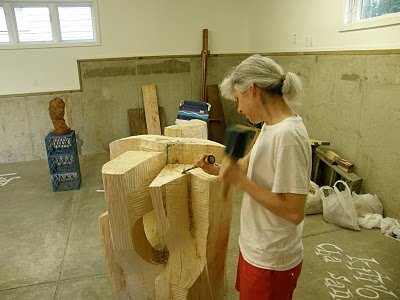 Mary Martin has a sign on her garage that says “open,” but she’s not selling anything. She has a huge sculpture on her front lawn which surely fools the eye of 100 percent of the people who see it: the sculpture appears to be metal, but it’s really made of hand-carved, painted wood.

I was actually looking to buy a $20 battery from an ad on Craigslist when I accidentally happened upon Mary Martin’s studio. Martin showed me the inside, talked about her art, and discussed where she gets materials. (By the way, Mary Martin is no relation to Mike Martin, the highly-esteemed commander of the Fourth Precinct, which was one of the first questions I asked.)

Martin’s carving material–some of it very large–comes from trees which have been sawed down in the neighborhood, some quite close to her house. A small network of friends and neighbors are aware of Martin’s need for large pieces of wood, and they help her.

Martin’s art is studio quality, and has been displayed in studios in the past, but Martin seems a bit put off from the studio scene. She speaks of how wood is not as respected of an artistic medium as other forms of expression, except when it’s polished and displayed with its natural grain. Try to make something out of wood and paint it, and the artistic world doesn’t seem to respect that as much.

Amazingly, Martin will carve a massive portion of a tree trunk–seemingly in love with the feel, the smell, the texture, the complexity of the natural grain–then coat the whole thing with paint. My first impulse would be to think: Why did you do that? Why did you carve it so carefully then slap paint over it? But then I think deeper, and I realize Martin’s art is a metaphor for the way people must behave in Western Civilization: we mask our true, complex individual nature beneath a facade of cosmetics, material possessions, acceptable public statements.

I’m not going to print Martin’s exact address (she seems private and introverted in some ways) but her studio can be found near 35th Ave. N. and Logan Ave. N. if you’re looking for it. 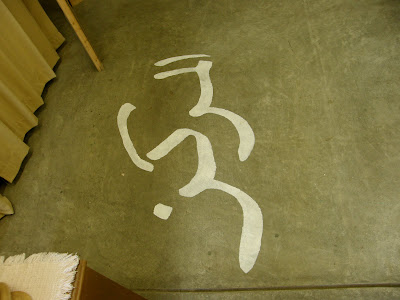 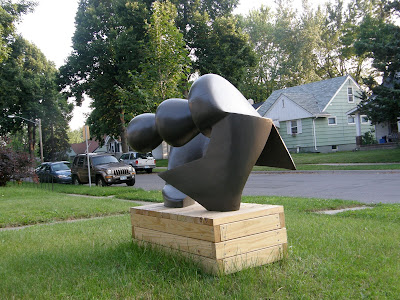 You’d never guess this statue is made of painted wood unless you walked right up and touched it. 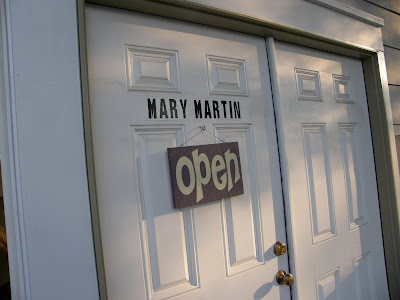 During times when she is in her studio, Martin puts up the garage door and puts an “open” sign on the “people door.”