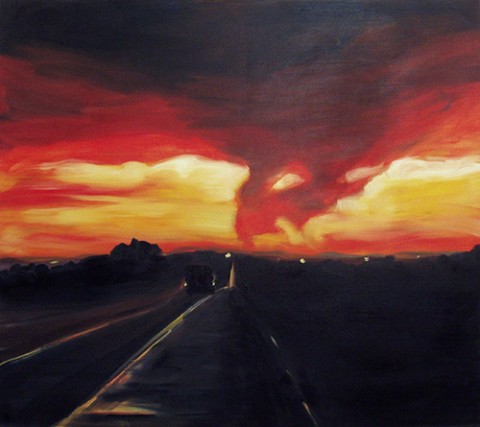 Joy Garnett’s Evac (2005), an abstraction of New Orleans on fire after Hurricane Katrina

Artist Joy Garnett scours the media for news images of disasters, man-made or natural, that become the basis for her evocative paintings on canvas. Events from the Paris riots to Hurricane Katrina have sparked her work, but it’s that last tragedy that’s the subject of a painting (above) she says she’ll give to the first collector who donates $10,000 or more for relief in earthquake-struck Haiti. Like the southeast Asian tsunami of 2005, Katrina is “a disaster that still reverberates,” she tells Hrag Vartanian at Hyperallergic.

No collectors have come forward — yet — but she says she has been contacted by an artist who wants to do the same thing. And maybe other, bigger-name creators will follow suit:

After posting, it occurred to me that while I may have the capacity to raise thousands, or perhaps tens of thousands, through the donation of one or two paintings, more established artists whose work commands a lot more certainly have it in their power to follow suit.


For instance: Damien Hirst is opening at Gagosian in New York on Jan 20th. I imagine he might take it upon himself to donate some portion of those inevitable sales. Just a suggestion.

For those of us with non-collector incomes, consider donating to the Red Cross by texting “HAITI” to 90999 to have $10 added to your phone bill, or to Wyclef Jean’s Yele by texting “YELE” to 501501 to give $5 the same way.