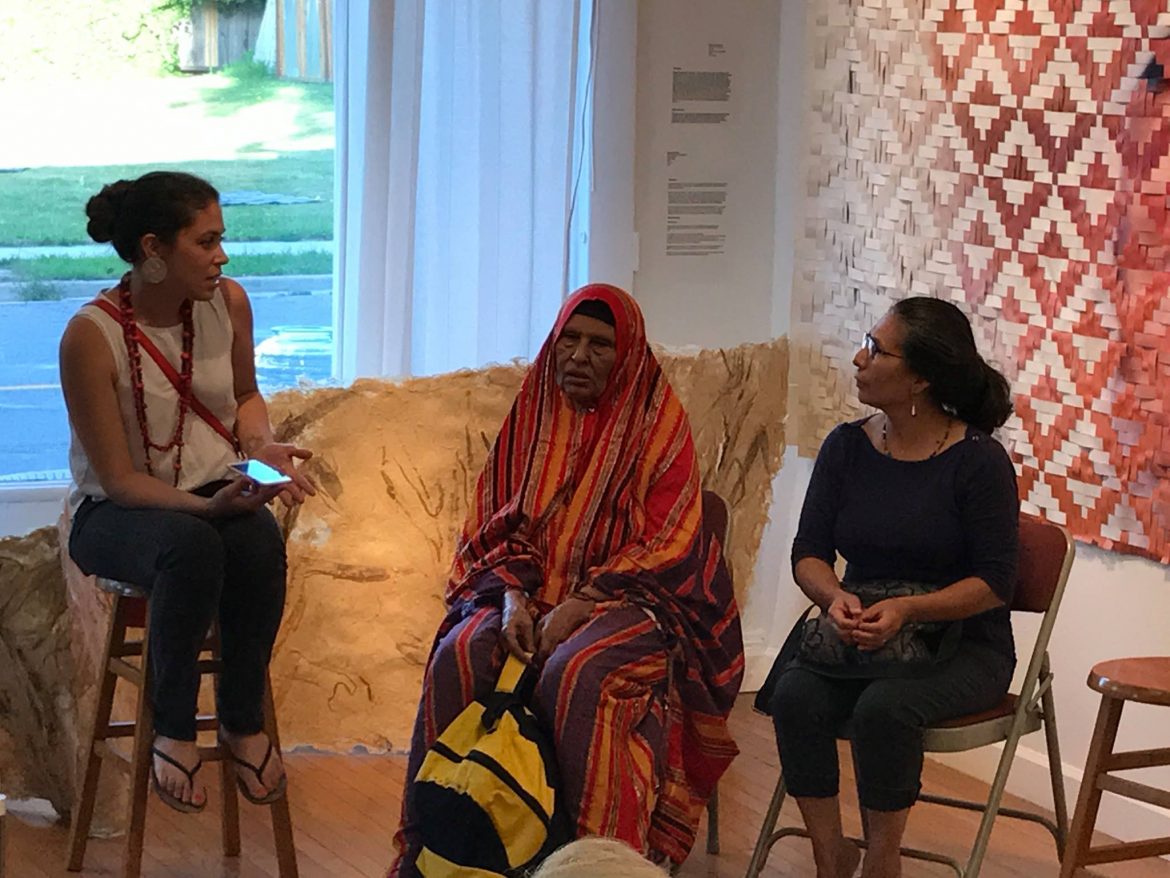 “History books tell you that Aztecs and Mayans have disappeared, but we’re in front of you now.”

Xilam Balam, artist, screen printer, audio engineer, lyricist, producer, teaching artist and one of the five founding members of the Electric Machete Studios said this as he sat at a table along with myself and Reynaldo Lara, another of the Electric Machete artists. I’m visiting the Electric Machete Studio space on the West Side of St. Paul. They’ve just finished a screen printing workshop with high school students. Sketches of nude bodies cover the walls around us, remnants from their last “People of Color & Indigenous Peoples (POCI) Figure Drawing” class, an opportunity for exclusively POCI artists to draw in safe space…so that they have equal opportunities to draw from each other and learn from each other.

For many years Electric Machete existed as an informal, family collective of artists and musicians, working together and independently to create exhibitions, popups and workshops. “We were all facing systemic barriers to entering the professional art world, even though we all had longtime professional art careers,” said Rebekah Crisanta de Ybarra, another founding member of the studio. “My primary goal with our space is to uplift Latinx artists as much as possible – including ourselves. If we can’t help ourselves we can’t help our community.”

In September of 2015, on the day of El Grito – the day marking the start of the Mexican War of Independence 205 years earlier – they became official and opened at their current location on the West Side.

Balam had planned to open a tattoo shop called the Electric Machete Studios, referring to the electric tattoo needle that slices through the outer layers of skin to permanently deposit ink. He specialized in Mayan and Mexican designs, but when money drew him to tattooing other “random” designs, he got a bit freaked out. The business idea of doing tattoos faded into the background and the collective decided to use the name as an umbrella for their art.

The West Side is nestled along the Mississippi River, in the nook where the river turns north for a few miles, and then south again. It is home to the St. Paul airport, Harriet Island Park and Cherokee Regional Park. Electric Machete is located on Smith Avenue, half a mile south of the river. Currently, the Smith Avenue bridge is closed, so visitors to the studio must cross the river at one of the three other bridges. Driving down Smith Street brings you past a few businesses – a gas station, bank, tattoo parlor, the Minnesota Birth Center, salon, cafe, bike store – all nestled between single-family homes with lots of lawn space.

This neighborhood has long been a home to Minnesota’s immigrant families, and especially Latinx communities. Through the 1960’s the heart of Minnesota’s Mexican community lived in the Lower West Side, or the Flats. The Chicano movement here was born on the West Side after St. Paul slated the Flats for urban renewal 55 years ago, pushing many residents out. In addition to creating drug-free streets and a community health clinic, the Chicano movement installed murals, Aztec folkloric dance troupes and Latinx theater companies that used their art to build community and share stories.

Electric Machete began with the mission to uplift the Latinx community, and because of the West Side’s Latinx history, it was the ideal place to carry out the mission. “We wanted to come here to the West Side, and try to remind everybody that this was the original Latinx neighborhood,” said Lara. “This was the original Latinx neighborhood. This is where the original school of Latinx art came from [in Minnesota]. It’s paying homage to that and trying to continue that legacy and be of service.”

The legacy of Latinx peoples in Minnesota could not be carried out without the use of arts. Luis Garzón, oboist of the Mexican Orchestra Los Aires Nacionales de México, was the first Latinx person to become a permanent resident of the state. He fell in love with a Minnesotan woman and settled on the West Side of St. Paul, founding the first Minnesotan Mexican-American orchestra and opening a grocery store. The tienda became a place for Latinx people to meet, shop and speak their own language. It was not only a place to buy groceries but a safe house of sorts, one that fostered community and helped to keep Latinx cultural traditions alive.

Electric Machete continues this legacy in its studio. According to Lara, “The Latinx community feels some ownership over the space at this point – this is a place where they can come and experience art and community.”

Another crucial part of Electric Machete’s mission is keeping alive traditional Latinx art forms. In addition to being visual artists, the members of Electric Machete are all also musicians. Balam makes ceramic flutes, which he uses in a band called Curandero. The band combines the pre-Columbian flutes with percussion and synthesizers, bringing together ancient and modern sounds to create something totally new.

“It’s about reviving an art that’s been lost,” says Lara. “Even where it comes from – in Mezo and Central America and Mexico – it’s a lost art form.”

For many immigrants whose histories and cultures have been lost to assimilation, this can be especially powerful. “When you connect with ancient art forms it’s healing. It reminds you of where you come from. It connects you to your roots. It stirs a memory that you didn’t know you had.”

Balam adds that Latinx and Indigenous peoples specifically face a kind of modern-day erasure. “We’re already dealing with the fact that history books tell you that Aztecs and Mayans have disappeared, but we’re in front of you now. So the instruments are just another part of [fighting that script] – to say we’re still here, we’re still practicing instrument making, [along with other] art forms.”

As Balam seeks to bring the current, living reality of Latinx and Indigenous artists to the public eye, so does Crisanta de Ybarra. She emphasizes that although the continuation of traditional artforms is important, and Indigenous and Latinx art is rooted in these traditions, Electric Machete artists are contemporary artists producing contemporary work. Particularly in finding grants for their art, POCI artists often face funders who want them to take on the additional role of continuing these traditional artforms as a way of also community organizing.

Crisanta de Ybarra notes that POCI artists are expected to be community artists in a different kind of way than white artists. She says that though many POCI artists do create traditional and community-based art, it’s not always the same art that they make as individual artists, and many grant opportunities conflate them into the same idea. This means that artists either have to compromise the art they want to be making to fulfill grant conditions or do double the work for the same amount of money.

“We are being pulled so thin, because we’re being asked to fill in the holes of an already broken art system.”

Electric Machete is not the first arts organization in the Twin Cities to use its art to combat injustice. South Minneapolis-based Intermedia Arts carried a similar mission of building understanding among people through art, to create “more capable, healthy, and equitable communities.” Unfortunately, Intermedia closed a few months ago due to financial hardship.

Balam and Lara both spoke about how Intermedia’s closing renewed a sense of urgency to the art Electric Machete is making and creating a space for. Balam noted that though it can be a struggle at times, they’ve “realized how important it is to stay open, to have a space like this and a resource for some community members that seek it out—and some that don’t.”

Their audiences also seem to feel this urgency, and Electric Machete sees more and more new faces at each of their events, however, many of these faces come from other parts of the cities.

But the West Side has been changing rapidly since the 1960’s when the city tore down the Flats. All of the Electric Machete members I spoke to talked about how the neighborhood is becoming more gentrified. Crisanta de Ybarra says that even though a part of the mission of the studio was to “try to interrupt gentrification to hold onto some of the cultural history of the neighborhood, even though we actively reflect on how each decision for each event [we produce] might contribute to gentrification or interrupt it, the neighborhood around us has already changed so fast that it also changes the nature of what we thought we wanted to be.”

As their audiences grow, so does the need for more space. And, as the need to continue to thrive grows, so does a desire to own a space. Electric Machete is looking for places on the West Side, but are also considering options outside the neighborhood, despite protests from West Side elders.

“Because the area around us has already been gentrified so much, people just aren’t walking by,” says Crisanta de Ybarra. “They’re not Latinx immigrants . . . We spend a lot of time at the superficial level of educating people who come in and wonder why it’s a Latinx space on the West Side.”

“I feel like we did what we could here,” says Lara.

Whether or not they decide to move their location, Electric Machete will continue to uplift and serve Latinx artists. They ask audiences – especially the non-Latinx and non-Indigenous members – to remember the art is rooted in a deep history and culture. Although the work might not resonate individually with every audience member, it might with others who are connected to those roots.

“I think we’re trying to rethink what accessibility means to us,” says Crisanta de Ybarra. “Initially, we thought accessibility was being in walking distance in a historically Latinx neighborhood, and that people would continue to come to the West Side for that kind of arts and cultural history . . . Now, it might serve us both in terms of studio space and our broader community of artists who we want to collaborate with and uplift if we were centrally located in the metro.”

You can visit the Electric Machete Studios on March 31 for their closing reception and panel about the politics of Brown bodies in figure drawing. You can also find their artists performing before Lila Downs at the Ordway, sharing their stories with Penumbra Theatre, performing at the first week of In the Heart of the Beast’s Puppet Lab, and participating in the 2018 Flint Hills Family Festival.