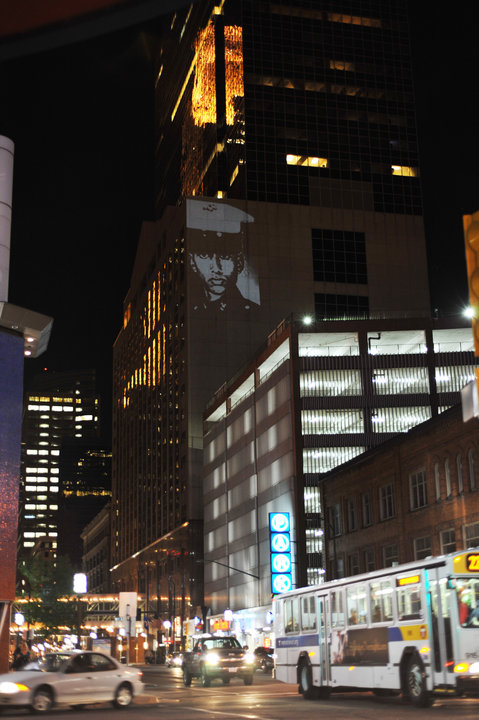 We’re at war — on two fronts — yet visible public awareness of the fact seems increasingly scarce. Thankfully, artists are trying to invade this apparent obliviousness with interventions, from Suzanne Opton’s billboards of those who fight on our behalf to Steve McQueen’s quest to commemorate killed-in-action soldiers on British postage stamps.

This Memorial Day, the faces of the fallen hit closer to home for Minnesotans. Through his residency with Minneapolis Art on Wheels, artist Aaron Marx has been projecting images of U.S. soldiers killed in action on facades of buildings in downtown Minneapolis. As of May 28 — the time of this writing — they were planned to be projected on the Basilica of St. Mary in downtown Minneapolis the evening of May 31, Memorial Day. Marx is traveling, so couldn’t explain the project in detail, but he did offer this description:

The images of the faces are scraped from the Washington Posts “Faces of the Fallen” and processed for long distance projection. The faces are paired with animations from a 3d model of the earth where the birth place and death place was mapped and connected with an arc that corresponds to the age of the soldier at death. Yes, I have names, ages, dates of birth, dates of death, location of birth (or hometown), and nature of death for most of the 5,400+ soldiers.

Marx says he was unable to map all the data during his three-week MAW residency for this iteration of the project, but he’s continuing that process. View more images from his “Mass Information and the Temporal Graffiti of War” series, including shots of the project as they appeared on the Basilica and the Walker Art Center recently: 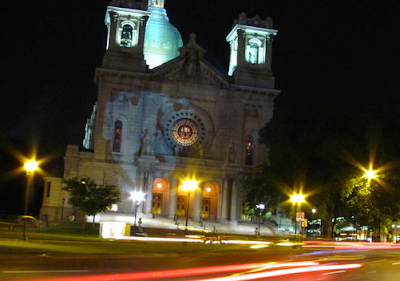 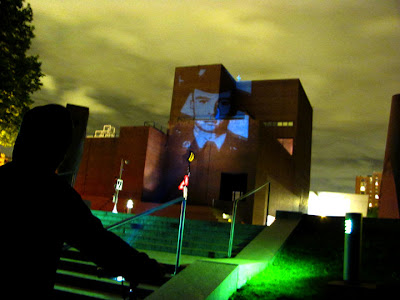