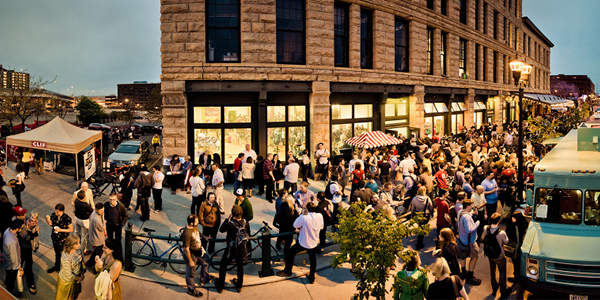 Last weekend, on Saturday, April 14, a super fun party known as the opening night of ARTCRANK happened. Not only does this event attract a whole bunch of super hot biker folks, it also consists of snazzy bike posters, beers, and food trucks. This year Bastian+Skoog even brought their new PEANUTCART! out to sell little bud vases to attach to all of those sexy bikes.

One of the highlights of this event is the ride over in short shorts. Yep, the Queer Bike Gang leads a bike ride around town that ends up at the ARTCRANK opening night party—held this year at the Traffic Zone Center for Visual Art—with the dress code consisting of one rule: wear the shortest shorts you can find. They even had some sassy pink ones for sale this year that were bordering on underwear, as were many of the other “shorts” on the ride. I wore a sparkly pink pair of what I thought were the shortest shorts that could happen. I even tweeted: “They don’t really make shorts any shorter than this.” Upon reaching the meeting place for the ride, I had to tweet a correction: “I retract my previous statement about there being no shorts shorter than this.”

When you are riding through town in the shortest shorts, you get a lot of stares, a lot of cheers and honks, and a few cameras pointed directly at your butt. I try to be sure to provide a really good angle for a butt-shot since I hope people get what they’re looking for out of their photos of a gang of scantily-dressed bikers. Like the Freedom From Pants ride that happens on the 4th of July, sometimes you get a biker or two to take off his or her pants and wear only his/her “shorts” (again with the underwear!) and join your group. That’s always funny and sometimes it happens to be a super weird or interesting character you pick up along the road.

The ride ends at ARTCRANK where some people choose to put on pants and some (like me, of course) choose to remain in the tiniest of trousers for the party. At ARTCRANK you see everyone who like posters, bicycles, and/or beer. I even ran into Mayda and she gave me a CD and photographed it stuck into my short shorts! After riding around in the smallest of slacks, I was hungry and ordered an arepa from Hola Arepa and also visited with my favorite ladies from the Chef Shack who had one of their trucks out. I was smitten with a couple of the posters so after a lot of debating I bought one and sent it home with a friend so I didn’t smoosh it.

The super fun bike-poster party was followed by a night of dancing at Jetset. I even changed my clothes only to get way too warm and strip back into my itty-bitty britches which got me a lot of funny looks on the dance floor. Somehow I think crazier things have happened on the dance floor at Jetset, but I guess my shiny shorts were pretty short.

If you missed the ARTCRANK party this year, be sure to check it out next year and also go see this year’s posters, which are shown around town for a while!