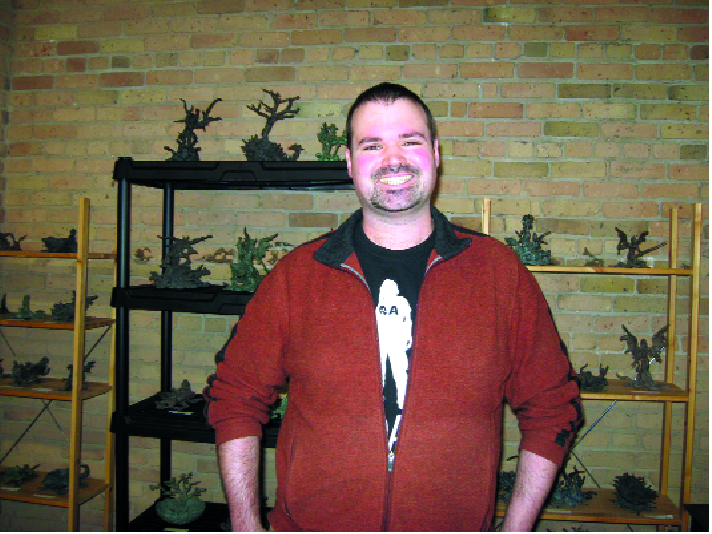 As visitors to his Casket Arts studio soon discover, his subjects include monsters, mythological figures, dinosaurs, video game and comic book creatures, frogs, trees, voodoo spirits, and mermaids. Although some are large, most of his statues are small and relatively portable, averaging six inches high and weighing about five pounds or less.

“I don’t worry about people coming in here and breaking anything,” he said, “but I do worry that they might drop something on their foot.”

Intricately detailed, his dinosaurs, bugs and various monsters are realistically scary, not whimsical. His bowls have legs; his hydra, a plethora of heads. A voodoo spirit, Papa Ghede or Baron Samedi—the god of sex, death and secrets—wears a rakish top hat. The sculptures are mostly dark, with green or black patinas.

Sturgis sculpts in wax, using a soldering iron to meld the pieces together. Unlike subtractive sculpture, where a sculptor chisels away wood or marble, his is additive; he builds onto his figures. When the piece is done, a foundry reproduces it in bronze. The method, called lost wax casting, involves pouring molten bronze into molds.

He has been interested in art since childhood, he said, when he started working with plasticine at age five. “I was always trying to make stuff. Then I tried to find a better way to make it more permanent.” He learned about bronze casting at the Minnesota Center for the Arts, and took a class when he was 15. At Breck High School, he said, he enjoyed ceramics classes.

He attended Alfred University in New York, but was disappointed by his art classes. “I had been doing bronze casting in high school; in college, it felt like I was going back to drawing pretty flowers.” He found that he preferred the anthropology classes, and graduated with a degree in general studies. After living in Boston for six years, he returned home to Minnesota. “The cost of living is better here than in Boston, and the arts scene is great.”

Sturgis lives in Minneapolis’ Lowry Hill neighborhood. His mother, Ellen Grace, an artist who specializes in print making and weaving, also has a studio in the Casket Arts Building. “I grew up in an environment where art was encouraged. Both my grandmothers have done bronze castings.” His uncle, Stuart Nielson, is a sculptor who works in Minneapolis’ Uptown.

When asked how long it takes Sturgis to create a piece, he said, “It all depends on how well I know the image. It can be a day or sometimes months. Casting takes at least three weeks. Usually I do one subject at a time, but I might have 3 to 10 in process simultaneously. I also go back to a lot of themes.” How many hours he spends in the studio depends on what he’s working on, he added. “I’ll spend two to eight hours in the studio. I work at home, too.”

The voodoo figure, he said, came out of a religion course that he took. “Ideas that I can chew on get to me. Sometimes it’s the story.” Other figures, he added, come from games. “I play Warhammer and video games such as Borderlands and BioShock. I got a bug, Umu, from an old Japanese comic book, Spirited Away, by Miyazaki.”

Sturgis said he went through a shark phase. “I was fascinated with sharks. I had recurring nightmares about them for years. They stopped when I started sculpting them.”

In the future, he said, he would like to get back to ceramics, where it takes less time to produce a finished piece. In the meantime, Sturgis said, his art is a full time job, and he is making a living at it. His prices range from $55 to $2,500 per sculpture, depending on size and type. “I did a show in 2006, in which I sold 80 percent of what I had out there. I had started with about 80 pieces.”

In recent years he has attracted several people who collect his work, he added. “This is a niche genre.”