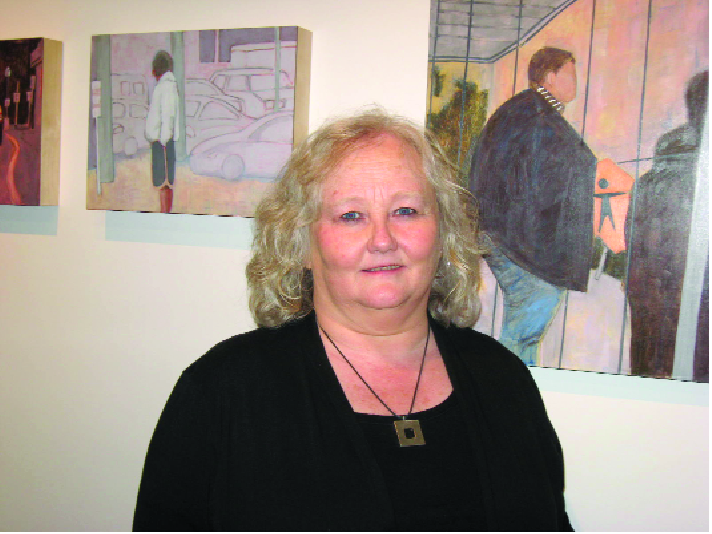 “I am interested in human nature and body language,” she said. “I want to create psychological tension in my pieces. Artistically, I play around with colors, shapes, and light.”

She favors muted colors: grey, blue, black. Her subjects’ features usually are blurred and non-distinct. “One of my friends accused me of not being able to draw faces,” she said, laughing. “That’s not it. I don’t often put faces on my people. I don’t want a figure to look like a specific person. I want to portray anyone. I want to get a feeling across that I feel too much detail takes away.”

Bloch will open her studio at the Northrup King building for Art-A-Whirl 2013. This year is special: It’s her 10th year as a participant.

Bloch’s art career got off to a slow start. “I’ve been interested in art since I was a kid, but it took me 24 years to get my fine arts degree,” she said. Although she started college a year after high school, she didn’t enjoy the “practical” classes she had signed up for, such as journalism and graphic arts. She quit school, started working, got married and had a daughter.

Years later, she quit her job, remarried, and while trying to figure out what to do with her life, “was literally sitting in my attic for three years,” she said. She began work on a series of paintings based on childhood photos. “I had a show at Phipps, a community arts gallery in Hudson, Wisconsin.” Bloch went back to school to study painting at the University of Minnesota with teacher Dave Feinberg, and also studied with artist Hazel Belvo, former Minneapolis College of Art and Design’s fine arts division chair.

Bloch found her studio in 2003. A Fridley resident, she drove down Central Avenue every day on her way to the Northrup King building. “I paid a lot of attention to the people on the street,” she said. “I started bringing my camera and taking pictures when I was driving. The subject matter really clicked for me. I’m always curious about who the people on the street are, and I’m also drawn to city scenes.

“The photos I take are blurry, not composed. I never know what I’m going to get. The photos get me going, and they give me some shapes to start with,” she said. “I would never want to sit out on the street and paint; I don’t need to paint from real life. I’m not trying to copy what I see in the photo. It’s not important to me that my paintings be realistic. Sometimes I combine two photos in a painting.

“Many of my paintings convey loneliness,” she added. “People are often alone on the street. You can be in a place where there’s a lot of people but you can be lonely. There’s something about them that everybody can relate to. A person in a car is protected; these people are exposed. The gestures they make, the way they’re standing, tells a lot about them.”

She said her husband, Ron Bloch, is a New Yorker who likes Northeast. “He says this is the area of Minneapolis that’s the most like New York.” She said she has expanded her street scene paintings since her early Central Avenue days; her background cities now include Seattle, San Diego, and New York.

Bloch usually spends at least four hours a day in her studio—”I can’t paint for longer than that,”—with weekends off. She also works at home with her photos, and tends to business paperwork. Although she has sold many paintings, including nearly all of her Central Avenue scenes, and her prices range from $250 to $1,950, she said that she’s not yet supporting herself.

“I worked for too many years, hating what I did. I don’t want this to turn into that. I don’t take commissions, and I also don’t make reproductions. I like people to have original pieces.”

She said some of her simplest paintings, such as “In Parenthesis,” which is a lone man in a city, have been the most time-consuming. “There are so few elements that you have to have everything just right, or it doesn’t work.” Bloch paints on wood, not canvas, and does not frame her work. In the future, she said, she plans to start doing larger pieces.

Although by nature she tends to be shy (“My secret wish is to be invisible,” she said) she is looking forward to this Art-A-Whirl because it’s something of a 10-year anniversary party for her. “I’m planning to do something a little more festive this year, and I’ll also be offering discounts,” she added.