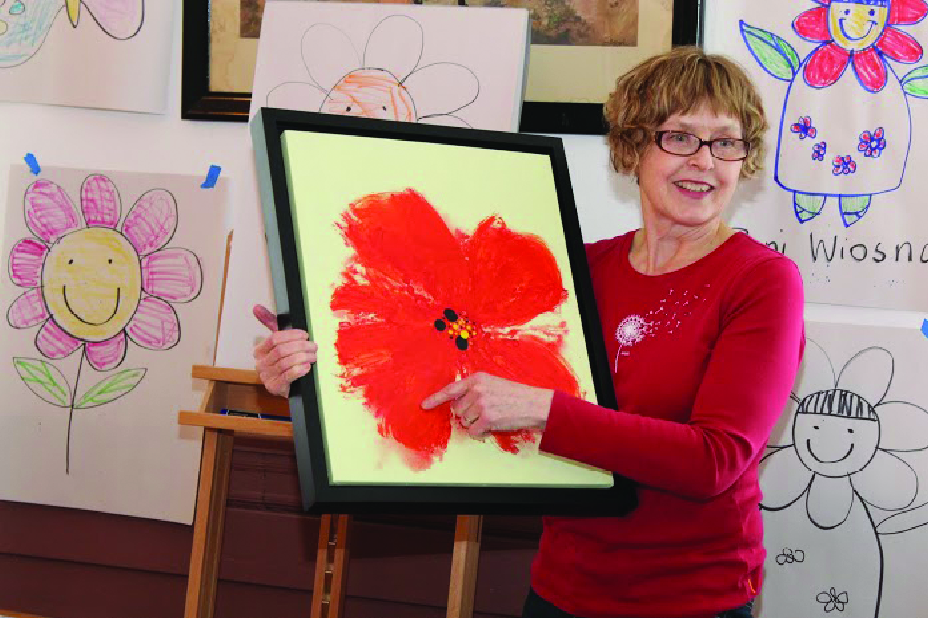 Welcome, Pani Wiosna, to the connectivity of Northeast.

In Poland, Wiosna is a fairy tale figure whose name translates to “Mrs. Spring.” Recently 32 aspiring young artists brought her to life (on canvas, in paint) under the guidance of visual artist Mary Welke and the support of POLESOM, a Polish language and cultural school that meets in the PNA (Polish National Alliance) building, 1304 4th St. NE.

Teaching youngsters didn’t faze Welke—she offers a “Rascals Art” painting workshop for kids 5-14 in her studio every summer—but teaching the class in Polish was another story. “When I heard that there were 32 students, I thought I was going to have a heart attack,” she said. “I was expecting three or four. I was so fearful that their Polish would be better than mine. I told them that I was a student as well, and asked if they would be able to help me speak the language. We became equals; they saw me as somebody who needed their help.” It turned out, she said, that the students’ language skills were mixed; some were fluent, others didn’t speak it at all.

Welke is a NEMAA member who will open her studio in the Thorp Building, 1618 & 1620 Central Ave NE, #212, for Art-A-Whirl. Her latest work, shown above, is a series of small poppies, which are Poland’s national flower. The NEMAA connection, she said, has led her to another teaching gig with yet another Northeast non-profit group. This summer she will teach painting and drawing classes at East Side Neighborhood Service’s Camp Bovey in northern Minnesota.

Kemerley said that on April 28, POLESOM celebrated its six month anniversary. Both women are from Poland: Kemerley moved to Minnesota from Warsaw 17 years ago, Kusmirak four years ago from Gdansk.

“We want to bring Polish culture to life,” Kemerley said.”We met three years ago and we both wanted to pursue teaching Polish to kids. We decided to start something together. Polish is not an easy language, but the country is full of culture. We partnered with the folks at PNA and started a monthly kids club. Our goal is to weave language and culture together.” Gosia and Janek Madej, members of PNA Lodge 1042, have been very supportive, they said.

The teachers work with children ages 3 to 11 who are from American families of Polish descent, or mixed Polish-American families who are second and third generation Americans. Kemerley and Kusmirak, who both have two children, have mixed-nationality families themselves. Kemerley is married to an American, Kusmirak’s husband is from India.

Their teaching methods, they said, include art, playtime, and music, to make the lessons more fun. “We sing songs such as ‘Old McDonald’ in Polish. We use tapes. We have enlisted the help of vocal instructors,” Kusmirak said. “We use music to teach language.”

Kemerley said she pursued a teaching degree in Poland. When she emigrated to the U.S., she attended Bethany College in Bloomington. Kusmirak has a master’s degree in education from Poland; her specialty is Polish language classes for elementary school children.

“I know how open kids are to learning and creativity.” Although there are many Polish people in Northeast, she said that she and other mothers tend to be working moms; the children attend daycares, and “their Polish exposure is not so great. Parents are looking for an educational experience.” Classes are loosely structured, they said, because families have different time commitments. “Since we started, we have reached about 64 students. Some come once a month. We can tailor a program to their needs. We also offer one on one classes. In this school, one size doesn’t fit all,” Kemerley said. “We have students who literally have zero knowledge of Polish. It’s amazing to see their progress.”

They said they enjoyed their partnership with Welke. “Mary was awesome,” Kemerley said, adding that the children enjoyed the workshop immensely, and produced very nice artwork.

POLESOM “is gearing up” to run two sessions of summer camp, June 13-19 and June 23-26. The theme is “Get to Know Poland,” and campers will “travel” (without leaving PNA) every day to a different Polish city. “They will have a project of the day and at the end, put together a book.”

Kemerley and Kusmirak said that in addition to teaching students about Poland, they are also teaching values. “At Easter, we talked about costumes and tradition. We asked them to bring a small gift, which we sent to an orphanage in Poland. We want them to know that it’s a good thing to share and be part of a community. We also want children to be proud of their heritage. Our students come from all over the Twin Cities. We have a good mixture. Now we are working to get the word out. We are looking for sponsors, people who would like to invest in this idea.”

During Art-A-Whirl, they plan to set up a table outdoors, weather permitting, and publicize the school through art displays, information and conversation. They said they are also looking forward to the Twin Cities Polish Festival, August 8-10.