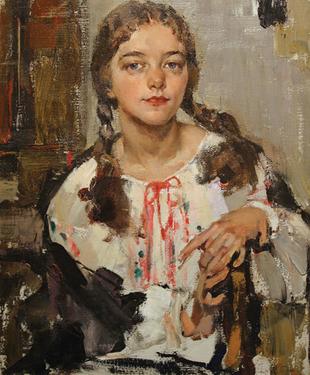 Of the Russian artists who have left a mark on American painting, Nicolai Fechin (1881–1955) ranks as one of the greatest. Student of Ilya Repin (1844-1930) and teacher of Peter Kotov (1889-1953), who in turn taught Sergei Bongart (1918–1985), Fechin’s legacy in both Russia and America is secure. The current exhibit of Fechin’s oils and drawings at The Museum of Russian Art (TMORA) is an enlightening glimpse into the history and diversity of Russian art.

Born in the Russian city of Kazan, Fechin began his art studies at the Kazan Art School in 1895, when he was 14 years old. He later studied under Repin at the Imperial Academy of Arts in Saint Petersburg.

Repin’s reputation as a realist had been built upon his historical, religious and anti-Czar revolutionary paintings, with somber scenes and smooth brushwork. But Repin was no conventional academic artist. “Barge Haulers on the Volga” breaks with the academy in its unsentimental subject and execution. Of Repin’s realism, Dostoyevsky wrote that he saw “barge haulers, real barge haulers, and nothing more… you can’t help but think you are indebted, truly indebted, to the people.” Soon after, Repin joined the anti-academy group of artists known as the Peredvizhniki (the Wanderers), who painted scenes of ordinary Russian life and brought their art directly to Russian villages.

Repin’s ideas about painting again changed after he encountered French Impressionism while traveling in Italy and France from 1873 to 1876. Initially he was critical of the new style. In her biography, Nicolai Fechin, Mary Balcomb notes that Repin’s first reaction to Impressionism was to say that it was “senseless as far as content goes. The execution shows talent but only the execution, there is no content whatsoever…French artists are not concerned with human beings, it is only costume, colour, and light effects that attract them in nature.”

Nevertheless, Impressionism’s “execution” did impact Repin’s work from that point, and by the time Fechin began studying with Repin, the teacher had loosened his brushwork and lightened his palette. His “Portrait of the composer Modest Petrovich Mussorgsky”  and “Tolstoy resting in the forest” are just two examples of how Repin’s style changed after his sojourn abroad.

Fechin, himself, traveled to Europe in 1910, likely seeing firsthand the works of the Impressionists, Post-Impressionists, German Expressionists and Fauves. But he never succumbed to imitation or the dazzle of technique. “Technique,” he wrote, “should be considered only as a means to an end, but never an end in itself. To me, ‘technique’ should be unlimited, a constant growth in ability and understanding; never mere virtuosity, but endless accumulation of qualities and wisdom.”

There was, however, one Russian artist that may have had a greater influence on Fechin than either Repin or Impressionism—Filipp Andreevich Malavin.

Malavin was an icon and portrait painter, and also a student of Repin, but he had left the academy by the time Fechin began studying there. Russian icon painting uses rich, pure colors, which Malavin easily transferred to his portraits and scenes of Russian life. “Two Russian Beauties” and “Peasant Girl Knitting a Stocking” demonstrate his use of pure color—especially red—for which he was criticized by the art establishment. But, while bold colors were characteristic of Malavin’s work, his distinctive mark was his brushstroke. Fechin wrote that, even after Malavin had left Repin’s studio, “…everyone’s head was still dizzy from the broad Malavin brush-stroke.”  Undoubtedly a strong influence, Malavin left behind a legacy of pure colors and broad brush strokes that Fechin absorbed, either consciously or unconsciously.

Despite the powerful influences around him, Fechin always maintained his own distinct style, layering pure colors in wide strokes with a dry-brush technique that allowed underlying colors and the white ground to gleam through. Fechin doesn’t “mix” color; he “builds” color with palette knife, brush and fingers. Unlike Impressionist forms that dissolve in small strokes of broken color, Fechin’s forms are solid. Even when line is not dominant in his paintings, his thorough grounding in drawing lends a structural firmness to his figures.

Fechin’s training and loyalty to Repin’s realism, assured that he would never move entirely towards nonobjective abstraction. Yet, he combines both realism and abstraction in his portraits with a forceful portrayal of the individual surrounded by a background of abstract patterns, shapes and textures. His portraits are not mere photographic likenesses. As “Young Woman” and the “Portrait of poetess Ella Young” show, his faces portray emotions and his subjects are thinking people. Whether you admire portrait work or not, you can’t help but be drawn into these peoples’ lives and stories.

In Taos, from 1927 to 1933, Fechin’s art thrived. The colors of the Southwest accorded with his dominant palette colors: yellow ochre, Van dyke brown, emerald green, rose madder, ultramarine blue, mineral violet and Mussini Sunproof rose. His landscapes, such as “Taos in winter,” show a command of light effects through blocks of built-up pure color, rather than juxtaposed broken brushstrokes. His canvasses were rich in impasto texture and bold color, as in “Pueblo Girl with Blue Shawl” and “Girl in Purple Dress.”

Fechin’s strengths as an artist lie in his superb draftsmanship and exquisite colors. “A line,” he wrote, “is nothing more than the boundary between space and form….Once a form is established, the lines which helped in its gradual building cease to exist or have meaning as ‘line’; they simply participate in the reality of the form.”

As for color, Fechin had a good deal more to say:

“It must not be forgotten that unadulterated paints fresh from the tube are beautiful, intense and clear, and only when one begins to mix them do they lose these vibrant qualities. The artist’s problem of retaining the true pure strength of color depends on keeping the pigments separate and individually distinct. Mixing paints has definite limitations and only certain combinations of the three basic ones continue to provide clear and vital colors.

“The beginner usually endeavors laboriously and literally to match the colors he sees (or those he imagines) by mixing endlessly the paints on his palette, and the results are dirty and dead. Everything which is alive reflects color and every reflection is a vibration. Hence, if one wishes to produce this living vibration one must resort to the use of the pure basic colors and ‘build’ with them in such a manner as to give this living effect and vibrancy.

“To avoid murky results, it is necessary to learn how to use the three basic colors and to apply them, layer upon layer, in such a way that the underlying color shows through the next application. For instance, one can use some blue paint, apply over it some red in such a manner that the blue and the red are seen simultaneously and thus produce the impression of a violet vibration. If, in the same careful manner, one puts upon his first combination a yellow color, a complete harmonization is reached—the colors are not mixed, but built one upon the other, retaining the full intensity of their vibrations.”

The Fechin exhibit, “Discovering 20th Century Russian Masters: Nicolai Fechin,” will run through January 20, 2013. For information about the exhibit contact TMORA at (612) 821-9045, or visit the website: at www.tmora.org