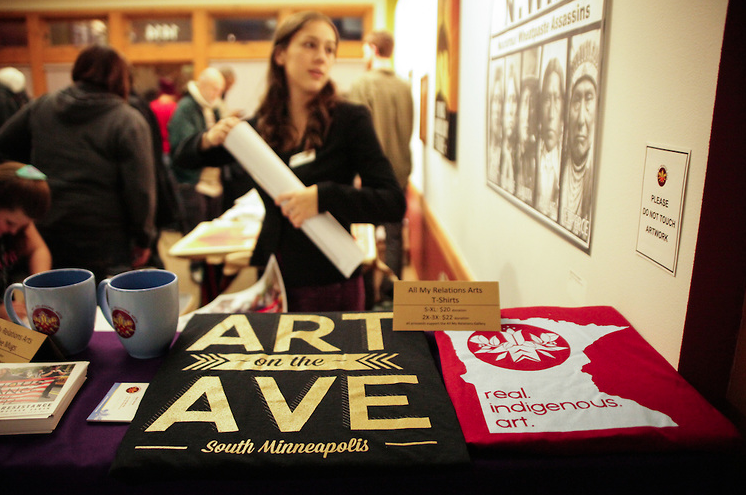 Photos from Art of Indigenous Resistance at All My Relations Gallery.

All photos taken by Corina Bernstein

All My Relations gallery held an opening on Friday for their current exhibition, “The Art of Indigenous Resistance: Inspiring the Protection of Mother Earth”, a traveling exhibition of work by 20 Indigenous artists co-curated by All My Relations Gallery and Honor the Earth. The exhibit track’s and highlights Honor the Earth’s 31 year history of community outreach and resistance. Along with wild rice soup being served to attendees, with berry sauce and a delicious white bean spread, the gallery opening hosted Winona LaDuke, speaking about Indigenous resistance and Honor the Earth, the organization she co-founded.

Sophie Hunter, one of the younger artists present at 11 years old, proudly showed me her piece before the speakers began, entitled “Treated?”, which asks the viewer the question, “If We Look The Same Inside Why Are We Treated…..”

A variety of voices were represented at the exhibit. Ashley Fairbanks, Jay Bad Heart Bull, & Graci Horne welcomed everyone on behalf of The Native American Community Develpment Corporation  and All My Relations Gallery. Votan, Lucie Skjefte, & Gregg Deal discussed how their work was articulating an inherent connection between earth and humanity and about environmental destruction. Art, they said, brings about change and social consciousness.

“This work is powerful because it shows a more nuanced, real picture of indigenous art,”  said Winona LaDuke to the audience in closing. “I want to go from a tipi to a tesla, painting the vision of where we’re going. Art gives us hope, helping us remember how beautiful we are, which calls us to be that beautiful.”

Arriving just before she was slated to speak, Winona LaDuke swept into the opening with her usual excitement and self-assured presence. LaDuke talked about the importance of stories, and telling those stories through mediums such as Ledger Art, one of her preferred art genres. There were several such Ledger Art pieces in the exhibit, such as Michael Horse’s “Last Breath of the Black Snake” (2014), which LaDuke noted Horse had created when Honor the Earth went to Washington, D.C. to fight the Keystone Pipeline (“the black snake”).