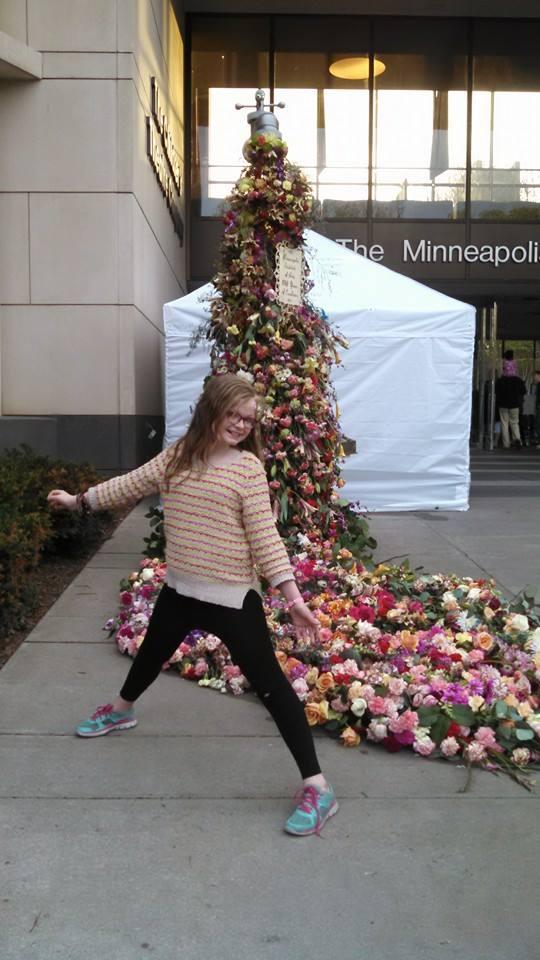 Last weekend, April 30 – May 3, spring sprouted inside and out at the Minneapolis Institute of Art (MIA) 32nd annual Art in Bloom where florists create arrangements that match, balance, mirror or somehow bounce off 150 works of art around the museum. We visited twice and I still feel like we weren’t able to take it all in but we enjoyed trying! 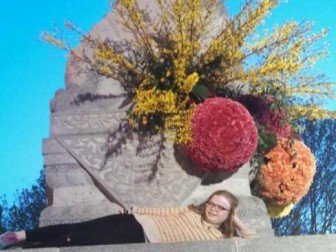 The first treat were the flower arrangements by Steven Ward of Arts and Flowers Design Studio around the Chinese Guardian Lions that are as sentries for the 24th Street entrance. It was also part of the MIA 52 birthday surprises. The 24th Street entrance usually feels like the gorgeous forgotten sister but for one weekend it got all dressed up in bold red and orange colors making it both welcoming and majestic. 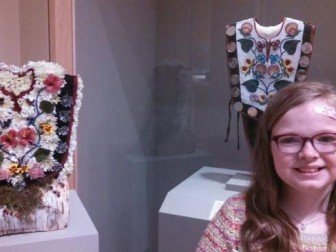 Majesty continued with the Ojibwe Cape “bloomed” by Edge Center for the Arts, another pairing of glory. The florists did a wonderful job replicating the original in color and pattern. The florists noted that they chose the piece because of on interest in the history of Native American artwork; the created a nice homage. 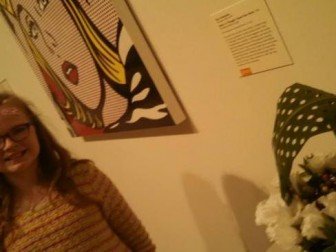 Other pairings were not replications but opportunities to highlight an aspect of the work; CJ Renner and Pam Clark bloomed Vicki – I Thought I Heard Your Voice! They took the idea of Lichtenstein’s comic book Ben-Day dots (or dot matrix pattern) and replicated it is hole-punched greenery and berries. And as my 10 year old date noted, te use of green emphasizes the lack of green in the art. We liked the work even more knowing that CJ Renner creates comic books and because we had seen the International Pop Art exhibit at the Walker earlier in the day. 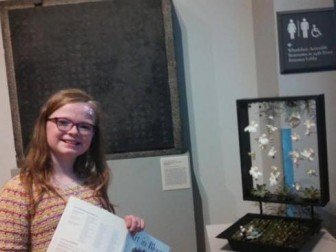 The Epitaph of Prince Cheng Ching was bloomed by Muse Flora and Acanthus Floral; it’s a fanciful replication with delicate white flowers representing the Kanji in the work. It was very pretty and reflective of the piece on a very surface level. The florist explained, “In my interpretation, the piece, not the person becomes the focus… The written characters are then seen for their form and not for their meaning.” 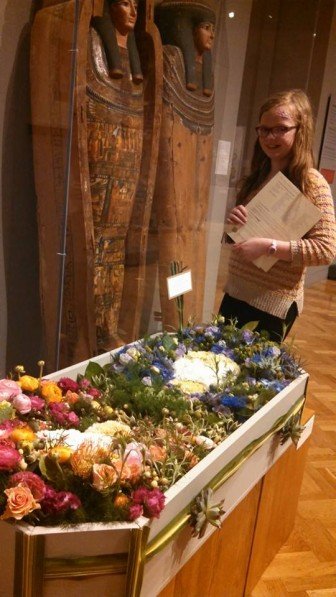 Cartonnage of Lady Tashat was bloomed by Mickey O’Kane and Kristie Harrison looked more at what was inside the art – literally. The work is a tomb with two heads in it because the tombs that are the cartonnage contain two heads. What a great way to impart new information on an artwork! 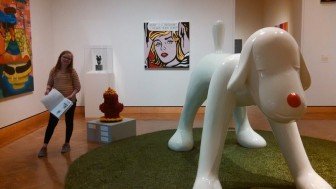 Your Dog was bloomed by Wendy Lutter and Stephanie Ross; according to my 10 year old date is was the most memorable pairing. The flowers were a designed as a well-placed fire hydrant. Very cute. 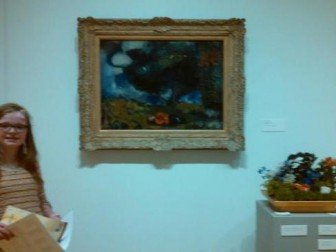 Marc Chagall’s The Poet with the Birds was bloomed by Amy Chapman, Amy Able Gardens. Their interpretation focused more on the colors. Several of the pairings were similar in their focus. The blurs of mimicking colors and smells is what really makes the Art of Bloom feel like a healthy shot of spring. 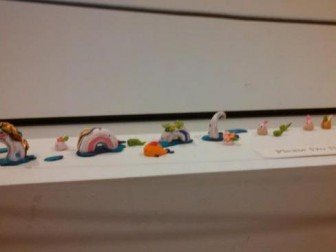 A special bonus that extends through June 21 and will be of extra appeal to younger visitors is the Microsafari. Minneapolis College of Art and Design (MCAD) student Mercedes Knapp has created tiny fanciful animals and placed them throughout the gallery. A fun addition and a great way to keep kids engaged.