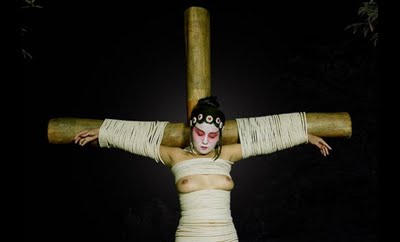 Ai Weiwei isn’t the only artist sitting in a cell in China for activities that have displeased the authorities: As I mentioned last Friday, Shanghai-based Guo Gai, among others, was arrested on Mar. 24 for photographing a performance at the Beijing Museum of Contemporary Art that reportedly had pro-democracy content. Gai has a Minneapolis connection: he’s scheduled to debut a large-scale photographic installation along with a newly commissioned choral work at the Soap Factory late this summer.

Gai had planned to visit to install the work and attend the Aug. 27 opening, but Debra deNoyelles, development director at the Soap, says she received a “very convoluted” email from Chinese officials this afternoon confirming that Gai remains in custody and that “because the charges against him are unclear, it is also unknown when he could be released.” It’s unlikely, she adds, that he’ll be granted a visa to leave the country.

“We are just worried about him,” Soap Factory Executive Director Ben Heywood writes in an email. “The concern would be what they might find on his laptop, and how that might affect his detention,” he said of Gai’s arrest for photographing the performance, which “touched on the current crackdown on freedom of expression and the ‘Jasmine Revolution,'” — the pro-democracy rallies that swept through Tunisia, Egypt, Libya and elsewhere — according to Chinese Human Rights Defenders. The work will be exhibited here even in Gai’s absence.

Heywood explains that Tom Rose, a sculptor and art professor at the University of Minnesota, brought Gai’s work to the Soap Factory’s attention. Rose has traveled to visit with Gai to select works for the installation, which will be shown in a gallery adjacent works by fellow Chinese artist Meng Teng and Ukraine’s Nataliya Slinko. 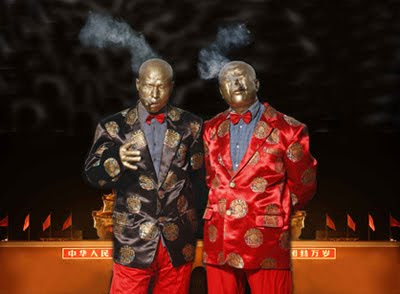 Tom wanted to get Guo to show here not just because of his striking photography, but because Guo himself knows that he really can’t show these works in China, and cannot perform the choral work at all. He’s of an older generation of artists … who have lived through China as communist, and now find themselves in a quasi-fascist dictatorship of unbridled capitalism coupled with complete repression of dissent, ruling, apparently, with the approval of everyone. He sees a rising middle class, a rising consumption of contemporary art, but still no questioning of why China has to be like this. His work is very much concerned with this hypocrisy; at least Mao was honest about repression… and that communist repression was towards some greater end rather than the accumulation of wealth.

Like Ai’s pointedly critical art, Gai’s politically charged work may offer clues about why Chinese authorities are holding him (although official charges haven’t yet been made public).

The 10-part vocal work to debut in Minneapolis, China Anhun, is based on 10 incidents in China in 2008, including the Beijing Olympics, the crackdown on citizen protesters in Longnan, Gansu province, and the Mar. 14 riots in Lhasa, Tibet, that killed 18. Each four-minute section uses only “expressive syllables and feelings outpoured in sound” — according to a performance description provided by the Soap Factory: “Joy, anger, and grief return to the fundamental sounds that emerge from the human throat.” The work aims to “comfort the souls that suffered, and to voice complaint about the lot of ordinary people.”

Gai’s photographs, likewise, have contemporary political urgency. His Chinese Jesus Triptych is about the collapse of spirituality amid cultural change as China’s commodity economy boomed. “Faith in communism was inculcated by autocratic education,” while the pursuit of material desires caused an erosion of that faith, an artist’s statement reads. “Meanwhile, Christian faith, and religious faith in general, has been developing rapidly in China.”

Other works in the large-scale installation planned for the Minneapolis venue address themes like Chinese agencies’ efforts to reshape — and interfere with — cultural production, capital punishment and how nouveau riche benefiting from China’s growth have “lost their moral compass,” among others.

Here’s the Soap Factory’s official statement, by Heywood, on the detention:
“The Soap Factory is distressed to learn of the arrest and detention of artist Guo Gai on March 24th at the Beijing Contemporary Art Museum. He was arrested with 3 other artists for taking photographs during a performance exhibition dealing with the ‘Jasmine Revolution.’ Like his collegue, Ai Wei Wei, Guo’s only crime is that of free expression within a repressive dictatorship. We hope that Guo will be released soon, and our prayers are with him, his friends and family.”