Today’s guest blog is a group entry by Barbara in Robbinsdale, Sherrilee, Plain Jane, tim, and a bystander who took a picture of the group with Sherrilee’s cell phone.

This is a two part story:

Six of our “baboons” – Sherrilee, Margaret (PJ), Lisa, Linda, tim, and Barbara (BiR) – showed up at the American Swedish Institute last Friday to see the exhibit In Our Nature: Tapestries of Helena Hernmarck. ASI’s brochure describes them as “monumental works [that] immerse the viewer in the best of nature: lush blooms, rich green forest scenes, and sunny poppy pastures…” They’re not kidding about “monumental” – many of these tapestries took up an entire wall, and some of the walls of ASI’s new addition are massive. You have to be far away to see the “picture” in these tapestries; when you’re up close you see how color happens in nature, the shading and layering, as well as “on the loom.”

Sherrilee describes it this way:

Most of the tapestries were woven and hung in the same vertical direction – up and down as it were. But there were a few tapestries with horizontal weave and it completely changed the look of those works. The horizontal pieces seemed almost like photos with amazingly clear details. One of these pieces was called “Mossklyftan” done in 2007. Mossklyftan translates literally as “Moss Gap” and is a perfect name, as a clear brook runs down the gap between moss-covered stones. Standing back in the room, it looked like a lovely photo of a forest scene. Up close you could see all the individual bits of wool and linen that make up the whole. The warp, which showed through occasionally, was a beautiful shade of pink that you wouldn’t think would be a good color in a forest scene, but it was perfect. 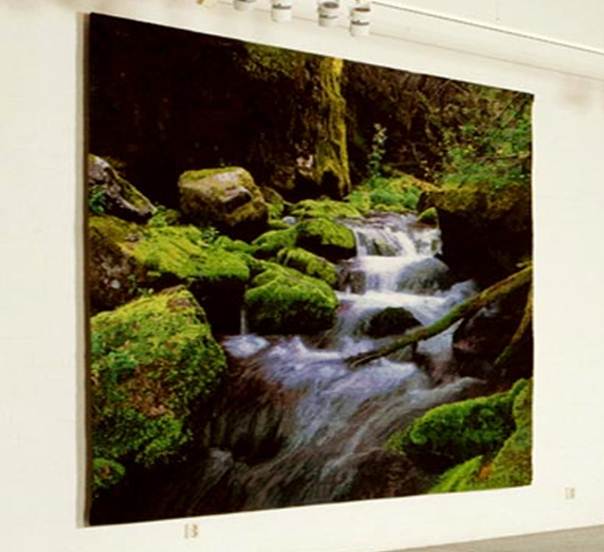 Helena’s motto was displayed in two languages on a wall at the beginning of the exhibit:

“My interest lies in capturing the image of a fleeting moment in the sustained and time-honored process of tapestry weaving.”

To our delight, PJ was able to read it to us in the Swedish – hard to describe how beautiful it sounds in the native tongue: 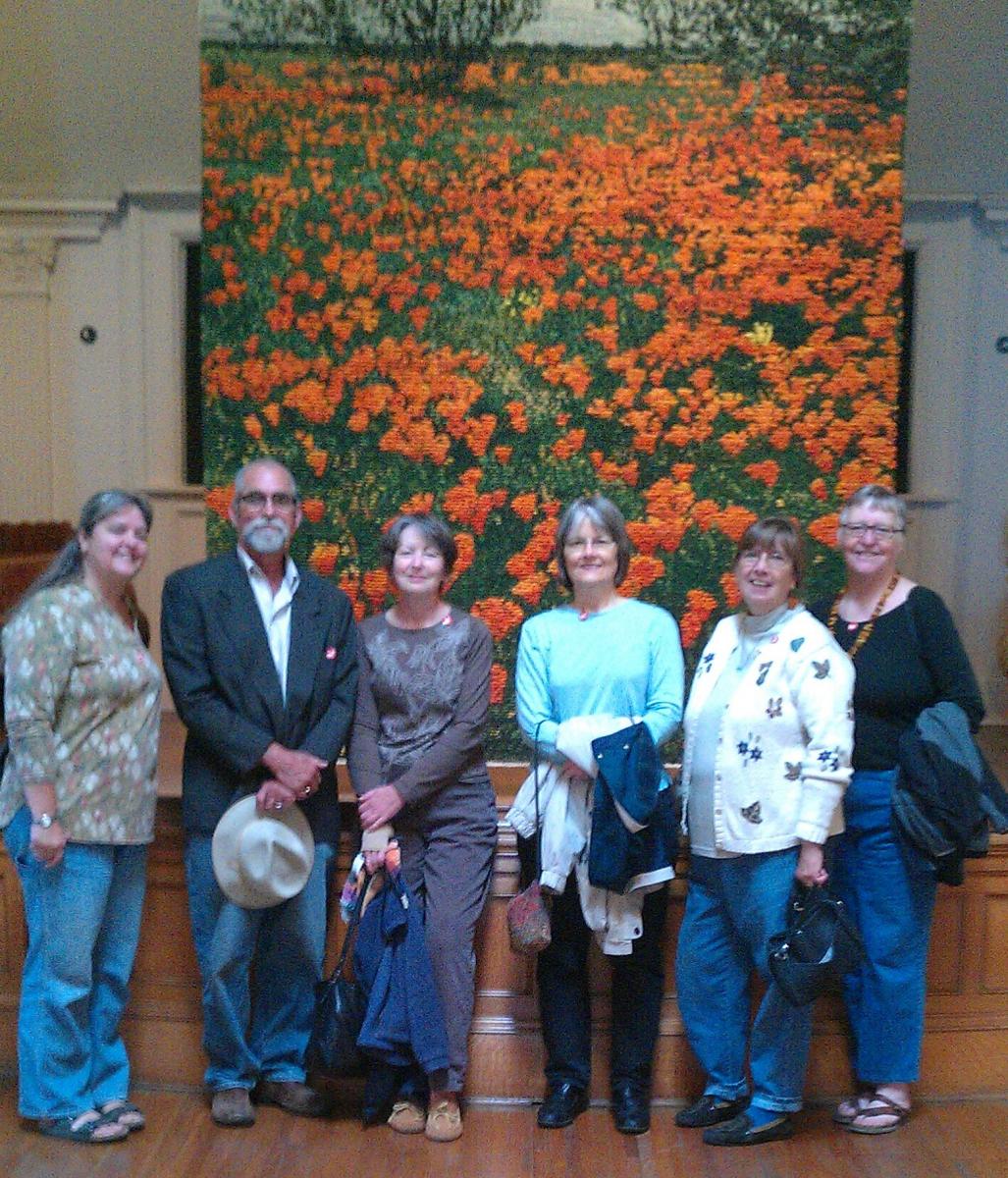 A bystander was kind enough to tag us in front of one of the poppy tapestries.

For more tapestry images, there is a slide show at Helena Hernmarck’s own website, along with an article written by one of the weavers who was in this summer’s weaving workshop at the ASI, which shows the tapestries that are here at ASI through October 14.

And if those aren’t enough links, PJ found a video showing how she does it!

Margaret describes the post exhibit activity: I’ll not focus on the exhibit but rather on the FIKA restaurant and its exquisite food. Possibly because of my Scandinavian background, I feel very at home at FIKA which is located in the stunning new, modern addition to the American Swedish Institute.

Tim and Linda had eaten at the cafe prior to viewing the tapestries, and Lisa and Sherrilee each had to get back to work. Barb and I were hungry, and Linda and tim kept us company. 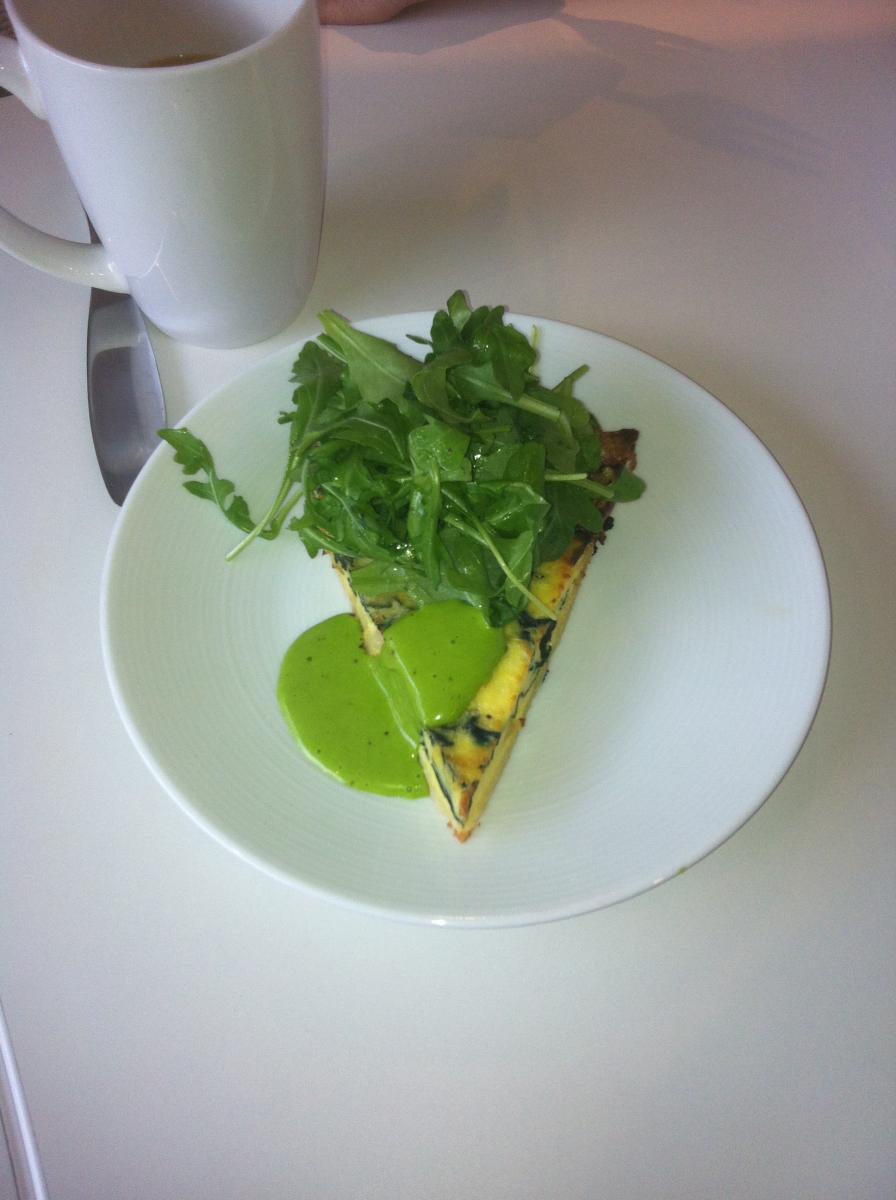 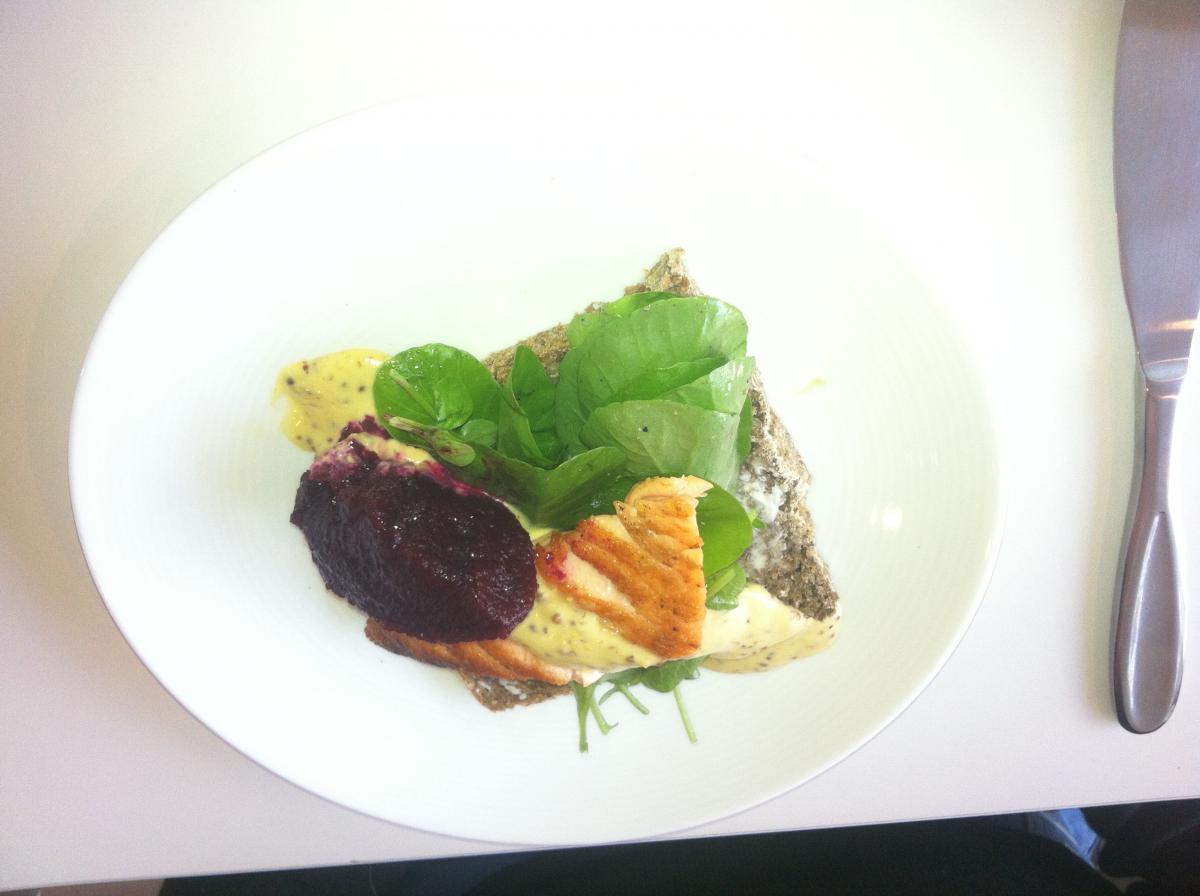 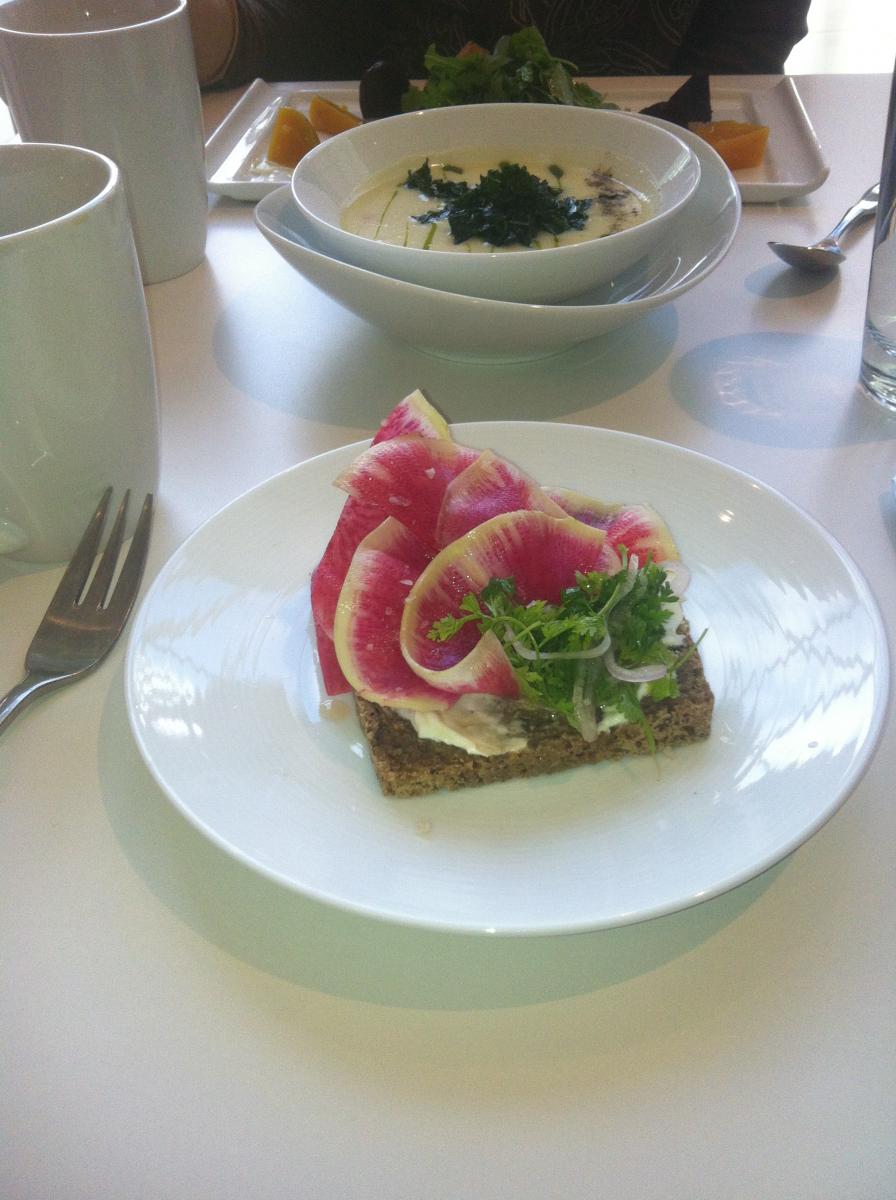 I had an open faced sandwich on dense, dark rye bread layered with watercress, a generous chunk of pan seared salmon drizzled with a scrumptious mustard sauce, and a dollop of quenelle of roasted red beets.

tim reported that he had the watermelon radish open-faced sandwich, and if memory serves, Linda had a roasted beet salad.

All reported that their food was excellent. Each entree cost in the neighborhood of $7.00 – $7.50, really a bargain in terms of quality and presentation. FIKA is well worth a visit, and if you time it right (after the lunch hour rush), there’s ample free parking in the Institute’s parking lot adjacent to the new addition. BiR wants to add that the coffee is also excellent.

Imagine you get to see your favorite kind of art, followed by a sumptuous meal of some kind. Design your own “art and eat” experience.