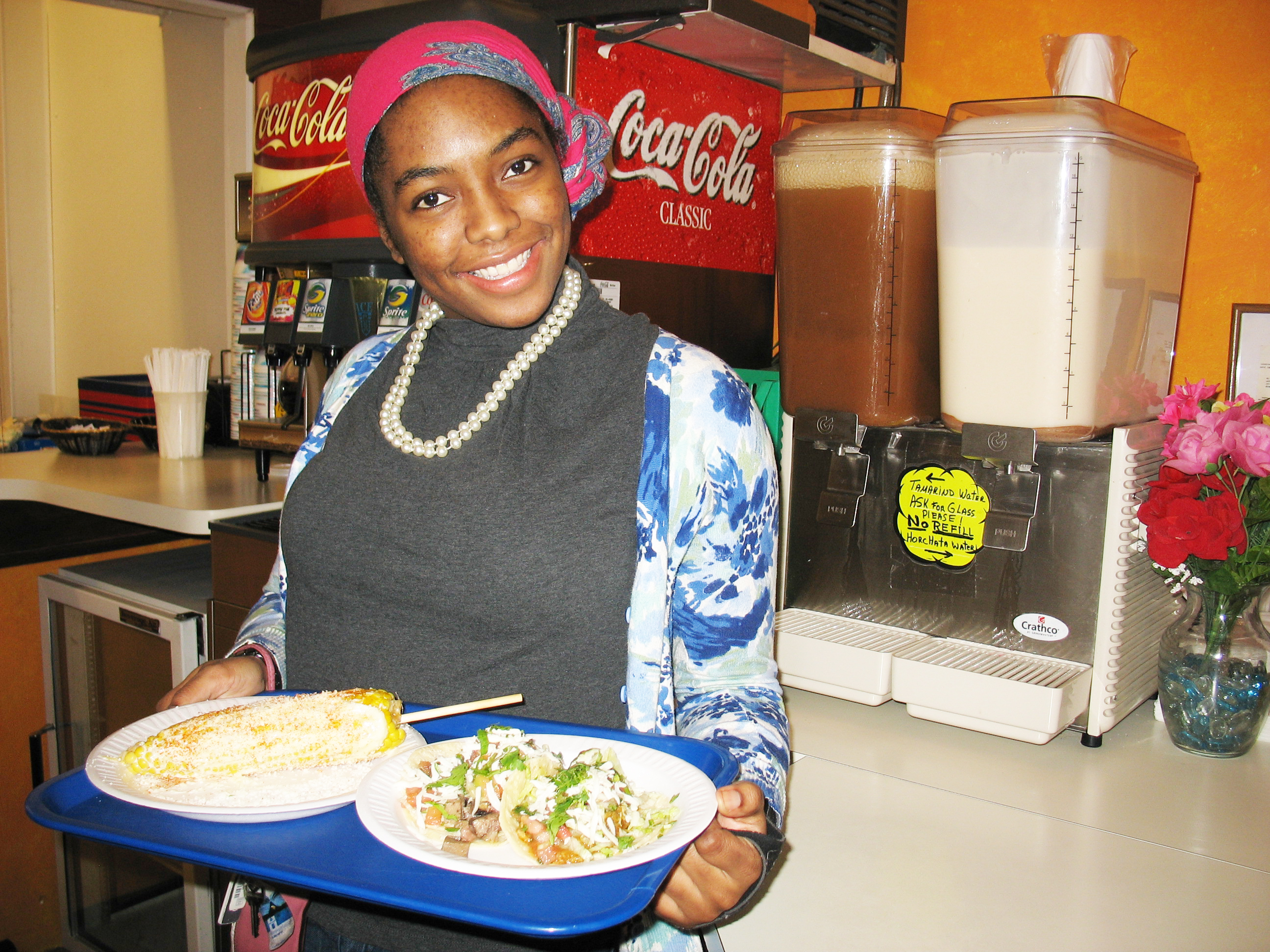 Since becoming a Minnesotan, I have discovered the winter blahs. They usually set in during the month of February. Fortunately, with the variety of restaurants offered here in Minnesota, a staycation to a warmer place is well within reach: sunny Mexico will be the first stop on our tour around the world. That’s right, this year I’ll be taking you on a journey across the globe by featuring an eating establishment representing a different cultural cuisine each month. So, United Foodies of Minnesota—get your passports out and have them ready to be stamped!

On 24th & Central Avenue in Northeast Minneapolis sits my little slice of Mexico. El Taco Riendo has become my go-to place for tacos in the Twin Cities. So much so that I find myself there on an almost weekly basis. “We have a lot of regulars,” acknowledged Miguel Gomez, the owner of El Taco Riendo, “About 20 percent of our customers are Latino, and the rest are a mix.”

On the day that the United Foodies of Minnesota visited, there was definitely a mix of people—which seemed appropriate considering how the tacos we know today stemmed from their own cultural blending of sorts. Corn itself was developed by people in the Sierra Madre mountains around 3000 BCE. When Hernan Cortes and his conquistadors arrived in the New World on April 22, 1519, they discovered the Aztecs making flat corn bread, or tlaxcalli. The Spanish called them tortillas.

Although the Aztecs had corn tortillas, it was not until Europeans came to Mexico that chicken, beef, and pork livestock were introduced. According to University of Minnesota history professor Jeffrey M. Pilcher, author of Planet Taco: A Global History of Mexican Food, tacos trace back to the silver mines in 18th century Mexico. In those days, the word “taco” referred to these pieces of paper that the silver miners wrapped around gunpowder and inserted into holes that they carved in the rock face. Pilcher points to the fact that taquitos resemble sticks of dynamite.

Pilcher also explained that one of the most popular types of tacos today, tacos al pastor, also stem from a cultural blending. “Lebanese migrants came to Mexico and brought recipes with them, including a vertical rotisserie much like shawarma,” Pilcher remarked, “It was their children who then made these ‘Arab tacos.’ The descendants eventually replaced the lamb with pork and the pita with corn tortillas. The red color of the meat comes from the chili marinade they used. And they would put a pineapple on top so the juices would leak down.” 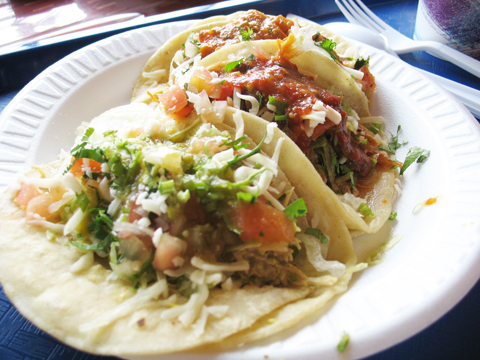 Although the United Foodies of Minnesota tried a variety of entrees on our first outing, the tacos al pastor and tinga de pollo remained my favorite items on the El Taco Riendo menu.

Gomez’s favorite is the beef vegetable soup because it reminds him of his homeland and his family. “My mother used to make it back in Mexico. It’s also great for the cold weather here in Minnesota.”

Gomez came to Minnesota from Mexico in 1984. He was in the food industry for 24 years before he started El Taco Riendo on April 25, 2009. Through the years, he worked in various Italian, Greek, and American restaurants or catering businesses. Now Gomez has the opportunity to share part of his own heritage through El Taco Riendo.

“The restaurant is decorated with colors inspired by the hacienda,” Gomez remarked as he pointed at the warm yellow tones of the walls adorned with sombreros and paintings, “It represents Mexico.” 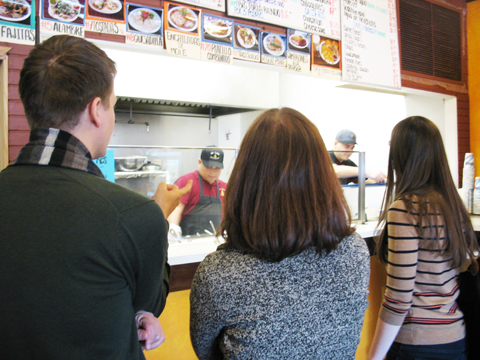 Gomez also brought the idea of the big torta sandwich from Mexico City to Minneapolis. Now a couple of other restaurants in the area offer the monster torta.

“95 percent of the items on the menu are homemade and prepared on the spot. The barbacoa is cooked slowly in the oven. The carnitas is homemade as well.” Gomez continued, “The mole on the enchiladas is our strongest selling item. The mole is homemade from Puebla, Mexico. Mole is the most difficult thing to make because it’s made with seeds—peanuts, sesame seeds, chocolate, and chilies—that are roasted until they’re soft and the seeds are then ground.”

Mole is another traditional Mexican dish with both indigenous and European roots. Although many legends surround the origins of mole poblano, one of the most common stories claims that the nuns at the Convent of Santa Rosa in Puebla de los Angeles created the first mole after learning that the archbishop was coming to visit. They had nothing to serve because they were poor and so they prayed to the angels for inspiration. After chopping, grinding, and roasting a mixture of chilies, spices, nuts, chocolate, and the other ingredients they had on hand for several hours, they served the mole sauce on the only meat they had—an old turkey. The archbishop was pleased with the meal and this national dish was born. 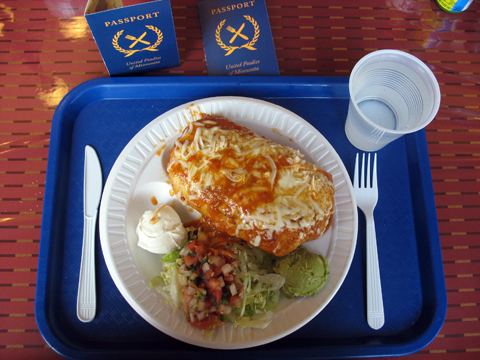 Historically, Mexican food has taken inspiration from many cultures, and now it is sparking new culinary fusions today.

“Whenever immigrants go anywhere, the newcomers establish food traditions,” Pilcher said. “In the 1920s, there was an author here in Minnesota who complained that Mexican food was going to the dogs because they were starting to put pickles in the tamales. That was the influence of the German and Polish cultures here. The mixing of ingredients and cultural blending is common. For example, Korean BBQ tacos in L.A. are spreading across the country. These Asian cuisines are using the taco as a vehicle to ‘Americanize’ their food for the American palate. It’s like the hamburger and hotdog. A hundred years ago, these were associated with German culture–which was the enemy. They were an alien food. People didn’t know what kind of meat was in them. And now, these are very ‘American’ dishes. In a similar vein, tacos and tamales have become ‘American’ in their own way.”

Today, you can walk into a market on Lake Street and find all kinds of ingredients that were not available outside of Mexico just a few decades ago. 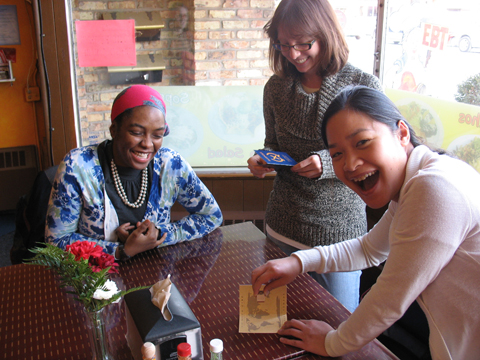 As the United Foodies of Minnesota wrapped up our time at El Taco Riendo, I started to think about the next stop on our journey around the world. If you would like to join our next foodventure, please e-mail me at michelletran@tcdailyplanet.net. Have an idea for a future stop? Feel free to e-mail or post a comment below. 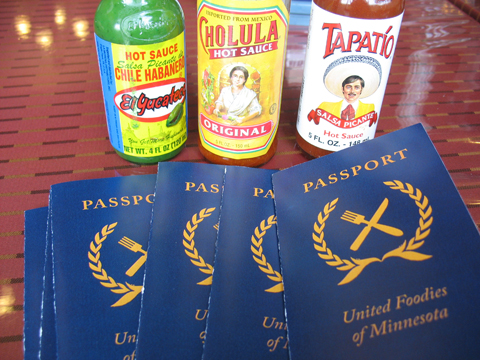 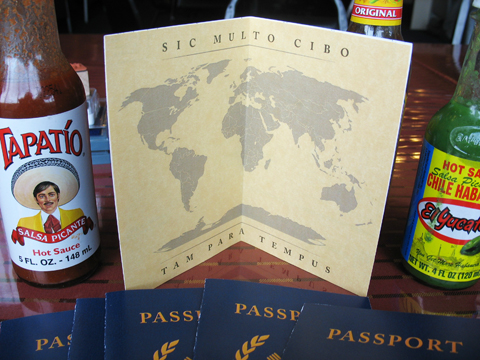 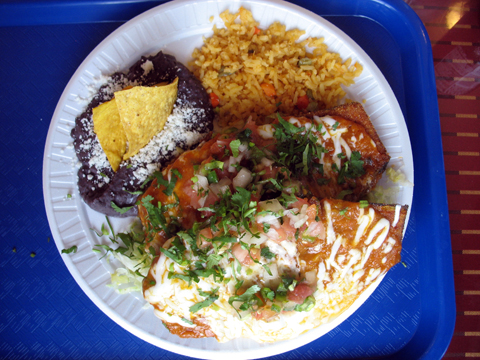 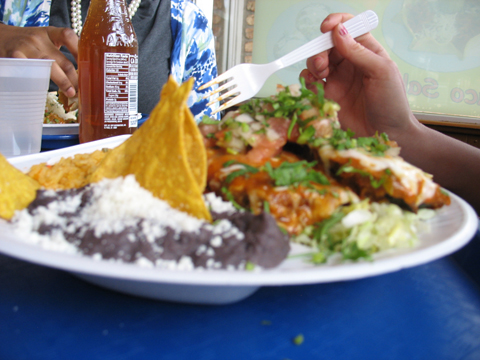