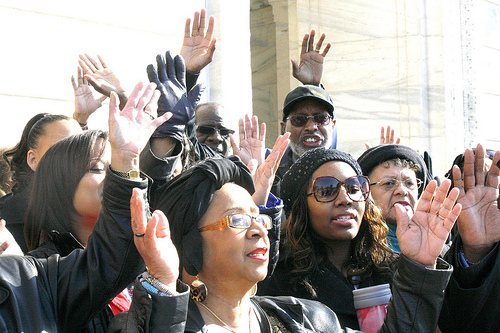 People of Faith rally at the Capitol  (Photo by Lou Michaels, courtesy of ISAIAH)

St. Paul is getting a new bike shop, according to the Star Tribune. Erik’s Bike Shop will open a new store in the former Auto Workers Union building on Ford Parkway, opposite the now-closed Ford Motor plant. According to the company website, owner Erik Saltvold started in the bike shop business at age 13, in his parents’ Richfield back yard. Now, 36 years later, Erik’s Bike Shops have 18 stores and 300 employees in Minnesota and Wisconsin.

From the past day’s crop of press releases, a few items of interest:

“On Thursday, April 4, 175 African-American clergy and members of the faith community held a rally at the Minnesota State Capitol Rotunda. On the 45th anniversary of Dr. Martin Luther King Jr.’s assassination, they assembled to urge legislators to close racial equity gaps and put the children and families in their communities on a firm foundation.

John Schmid sent this along:

Over 50 Minnesotans will gather at the Minnesota Public Utilities Commission (MPUC) offices Friday, April 5 at 12:45pm to deliver a symbolic public comment against the proposed increase the distribution of tar sands oil through Minnesota. In the aftermath of recent tar sand oil spills near Parker’s Prairie, MN, and in Mayflower, Arkansas, a group of Minnesotans is calling attention to existence of this hazardous material currently being shipped across Minnesota and the tremendous risks of allowing Enbridge to increase pipeline capacity.

Some good news from the Department of Human Services:

The increase was initially identified in the 2011 annual report, the first released by the newly created OIG. Further analysis showed the number of deaths increased from an average of six per year prior to 2006 to more than 11 in both 2010 and 2011. Within the first four months of 2012, six infant deaths had already been reported. The deaths were predominantly in family child care settings and related to unsafe sleep practices.

The 2012 report (PDF) showed marked improvement in the second half of the year. No infant deaths in child care were reported for 2012 after July. In 2013 one death has been reported. The report said efforts to raise child care providers’ awareness of safe sleep practices and stepped-up enforcement of rules appear to have contributed to the drop.

And from the legislature — maybe they can work together: