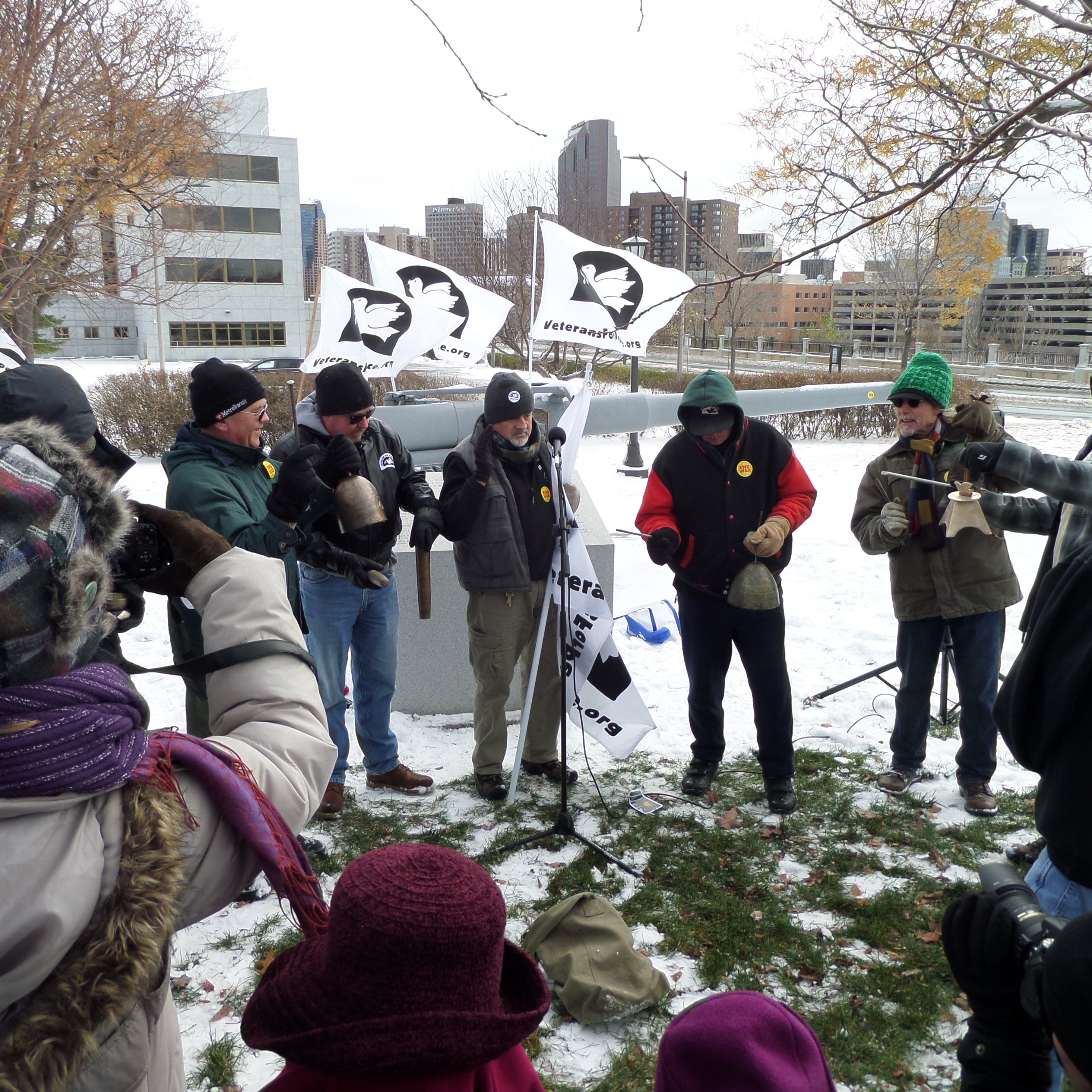 This morning I attended the annual Vets for Peace observance of Armistice Day at the USS Ward monument on the Minnesota State Capitol grounds.

It was a bone-chilling day with a numbing wind, and on the way home I stopped at my favorite restaurant for a cup of coffee and a day old cookie (cheapskate that I am). Going to pay my tab I saw that the restaurant, in honor of Veterans Day, would give veterans for 50% of ordinary price, but you had to show evidence of service. Darn. Here I’d not only had a cheap meal, but my dog tags were at home….

Armistice Day? Veterans Day? Remembrance Day? They all commemorate the 11th hour of the 11th day of the 11th month of 1918, when WWI, the War to end all Wars, ended.

It is no accident that the Vets for Peace, mostly vets of the Vietnam era forward, call their observance “Armistice Day”, while the official observance is called “Veterans Day”. The link hidden behind the words above gives the story of when the U.S. dropped “Armistice” in favor of “Veteran”. It was not a subtle change.

Our outdoor observance attracted about 30 of us today, less than usual, in substantial part due to the weather. On the other hand, this was a very good crowd especially given the weather.

But the gathering was its usual inspiring self, ending with an assortment of bells being rung 11 times to remember the 11th, 11th, 11th of the year 1918.

A moving rendition of the World War I poem “In Flanders Field” was offered by one of those in attendance.

One of the speakers announced the death, yesterday, of a young man, Tomas Young, 34, who I had never heard of. I read about him when I returned home, and this link includes a short article and a 48 minute video well worth taking the time to read and watch.

Mr. Young, who enlisted in the patriotic wake of 9-11-01 to go fight the “evil doers” in Afghanistan, ended up in Iraq and was near fatally wounded on his fourth day in combat there. The video continues the story.

Today I remembered the first Armistice Day observance I attended here. It was Nov. 11 of 2002, out at Ft. Snelling. I remember it particularly because a year earlier, Nov. 11, 2001, we were at Gatwick Airport in suburban London, about to head home after a vacation in London. At 11 a.m. on that day the public address announcer at Gatwick asked for two minutes of silence – of remembrance – for those who gave their lives.

We could hear a pin drop, literally. Not even a baby cried. I reported that at Ft. Snelling a year later to an attentive group of people who were all strangers to me.

The English take this day of peace seriously.

Today, those of us who served and got lucky and didn’t have to deal with the messiness aftermath of war, personally, can cash in on the sacrifices of others in our seeming endless wars. But there are huge numbers of “walking wounded”, homeless, etc. One of them, Tomas Young, died young yesterday.

Vets for Peace looks for some other way to resolve conflict than rushing into combat. Great numbers of us have been there, done that….

I end this column with the song that we started with this morning: an anthem of peace, sung here by John Denver, “Last night I had the strangest dream”.