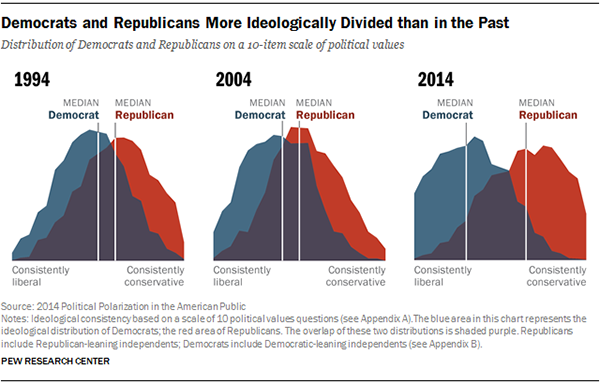 Last year, our federal government shut down. In 2011, Minnesota’s government did the same thing. Clearly, as far as governments go, we are struggling to come up with a functioning public policy consensus. But this problem extends beyond stalled governments. It has woven its way into the very fabric of American culture, taking over our way of life, and if we are not cognizant of it, it will surely have its way with our nation’s economy and political scene.

Political polarization is a mainstream experience.

A new Pew Research Center report indicates that over the last 20 years, our political ideologies have deepened to the extent where we are living and breathing them in our daily lives. We are so divided that it has begun to influence where we live, the people we choose to associate with, and how we view those who disagree with us. Even more concerning, the problem is worse among people who are engaged in the political scene.

We know this is a problem – it’s shut down our government both on a national and state level. But with all the trash talk, what can we actually do about it?

During my senior year of high school, I wrote an Original Oratory speech competition piece, “Kill the Troll,” addressing this issue. I intended to call attention to media troublemakers who distract us from legitimate conversation and ignite fierce, polarizing debate. Even then, the core problem is more simple than one might imagine. The trouble is in addressing it.

Essentially, polarization stems from a lack of understanding coupled with ineffective discourse. When we use inflammatory language that doesn’t actually describe much, or doesn’t have any fact to support it, we invite heated discussions and frustration. This frustration metastasizes and eventually blocks communication all together.

We need to humanize politics, starting at home. We need to go back to Kindergarten: remember to speak with our indoor voices, treat people with respect, and listen carefully to all of what they have to say. We need to break the cycle, strive to maintain educated and up-to-date. We have to remember that those who disagree with us are not inherently ruining the country. The abyss dividing us is.

As I ended my Oratory piece, “So, instead of giving the trolls what they want, our anger, devotion, and ignorance, let us light our way with knowledge, see the face of our political rivals as a human compatriot, and finally end the reign of the troll. “