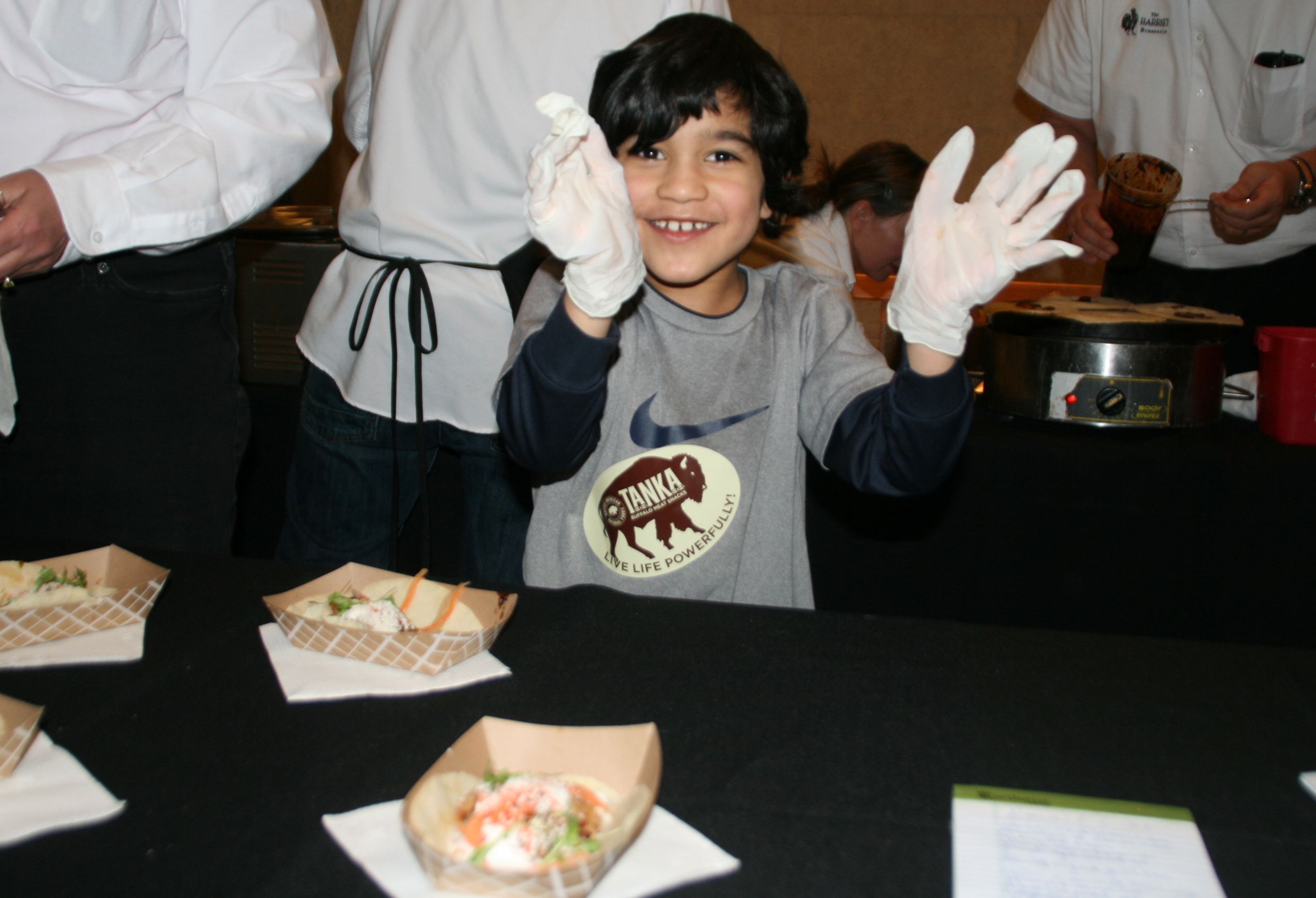 If fry bread tacos are the only Native American food you’ve heard about, you may be in for a surprise. A new movement, to take traditional and native ingredients – pre-colonization ingredients like potatoes, corn, dandelion, fish and buffalo – and move them upscale is taking root in Minnesota.

The North Coast Nosh, held at the Minnesota History Center on Feb. 19th, featured more than 20 regional food businesses, with food samples and chances to learn about the new take on an ancient style of food. Many Native American operations were represented, but all focused on traditionally inspired high quality local ingredients and healthy cooking.

Sherman has been on a mission to educate people on cooking and eating haute native dishes since 2011, giving talks and holding pop-up restaurant events. At the most recent, held at the Astor, he served elegant versions of rabbit, duck, squash, and smoked whitefish, using all local ingredients.

“I’ve been working in fine dining for years, so building composed plates is something I do,” he said. “It’s an expression of art.”

Sherman started cooking at resorts near his Black Hills reservation home when he was 13-years old, working his way up to chef and managing to pick up a business degree in the meantime.

Sherman has focused on foods of the Dakota and Ojibwe tribes, and although he ate regional native food while growing up, he knew there was a lot more to learn if he wanted to bring the cuisine from the reservation to the world.

“There wasn’t a lot of Native American food out there in restaurants,” he said. “I went searching, talking to elders, figuring out the foundation of these food systems. I learned about natural ways of preservation and cooking techniques and what people were storing away for the winter.”

“The food is simple. It’s a minimal style of cooking, staying true to local food,” he said. “The food’s clean.” Sherman thinks that many people are ready to try traditional cuisine. “Rabbit braised with cedar and maple, for example, is very comfortable for most people. It’s just the flavors of Minnesota with a Native American technique.”

Later this year, Chef Sherman, his co-chef Christine Werner, Lenny Russo of Heartland Restaurant and former MN Secretary of State Mark Richie hope to travel to the 2015 Milan World’s Fair to booster Minnesota and to give demonstrations of American indigenous foods as part of the Fair’s “Feeding the Planet’ theme. The World Fair is expected to attract 29 million visitors from May through October. The two Sioux Chefs will take over a restaurant at the Fair for a week, then leaving to travel Europe, including Norway and Iceland to spread the word.

The lines were long at the sample tables, including the Tanka Fund table, where you could taste their exclusive turkey/buffalo/cranberry jerky and sign up to win a hand-painted Lakota buffalo hide. Tanka Fund’s national campaign hopes to return the buffalo to the native prairie ecosystem. Red Lake Nation Fishery account manager Robert Blake held our a tray of delicious samples of smoked whitefish and salmon spreads. “Have a nosh,” he said.

The Hungry Turtle Farmers Cooperative, located in nearby Wisconsin, is a group of small organic farmers, working to create a local sustainable local food system.

Wild rice was everywhere, from cereals and pancake mixes to cake made with wild rice flour to wild rice pasta. So were maple products including syrup and maple sugar candy.

Chef Sherman is banking that foods like these will be part of the new healthy-eating trend. He is hoping to spread the gospel of appetizing, healthy food to Native American populations. But, he wants attract the general population of food adventurers. He is planning on opening a fine dining restaurant late in 2015 serving foods inspired by traditional Native recipes. He’s also is working with Little Earth and the Minneapolis American Indian Center to introduce a food truck featuring local native foods, ready to hit the road by this summer. “Food is the focus,” he said. “It’s part of the future of our culture.”

Wild rice came in many forms