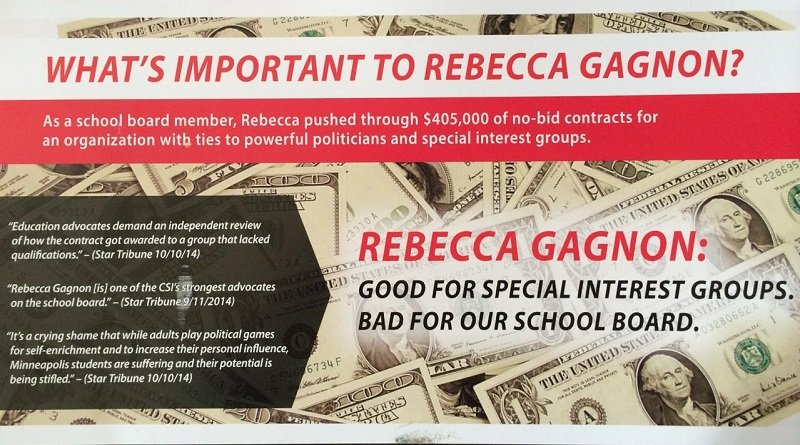 This negative ad mailer, which went out earlier this month, was paid for by the Minneapolis Progressive Education Fund and targets Minneapolis school board candidate Rebeccas Gagnon.

Will a seat, or two, on the Minneapolis school board be sold to the highest bidder?

The amount of money flowing into the 2014 Minneapolis school board race is enormous, according to the campaign finance reports that were submitted by candidates and various advocacy groups.

Of the four at-large candidates running for the two open citywide seats on the school board, Don Samuels has raised the most money, with a total of $65, 103. Next up is Iris Altamirano, who shares the DFL endorsement with incumbent Rebecca Gagnon. Altamirano’s report shows that she has raised over $41,000, which is more than twice as much as Gagnon’s totals. Candidate Ira Jourdain has raised just over $3,000.

What may be more interesting is the amount of money from outside of Minnesota that is flowing into the race, through groups such as the 50CAN Action Fund, the Students for Education Reform Action Fund, and a group calling itself the Minneapolis Progressive Education Fund (MPEF).

While the most recent totals for both the 50CAN Action Fund, which is the advocacy arm of the education reform group MinnCAN, and the Students for Education Reform Action Fund are under $40,000, the MPEF has amassed a huge war chest, to the tune of more than $200,000, according to a campaign finance report filed on Oct. 28.

Looking at the reports, the money MPEF has raised is mostly coming from a handful of billionaires and millionaires from outside of Minnesota. Former New York City mayor Michael Bloomberg, for example, gave the MPEF $100,000, while California billionaire Arthur Rock gave $90,000.

Daniel Sellers, who is the director of MinnCAN and its 501c4 advocacy group, the 50CAN Action Fund, is also the chair of the MPEF. So far, the MPEF has set up a polished looking website and campaigned not only on behalf of Samuels and Altamirano, through two mailers and one Robocall, but directly against incumbent Gagnon.

In a phone interview, Sellers said that the contributions to his group from people like Bloomberg are nothing more than an “indication that they care about Minneapolis.”

Sellers also said resources for the fund were sought from across the state and country, and that it was sold as an opportunity for “investors to help elect strong leaders for our school board.”

Both Bloomberg and Rock have invested in local school board races across the country, and both have noted histories as investors and supporters of charter schools.

An article in the New York Daily News, for example, states that “money for charter schools exploded from $32 million to about $659 million” under Bloomberg’s tenure as mayor of New York. By the time mayor Bloomberg took office, he changed New York state law so that he gained mayoral control of the city’s school district.

But Sellers said that investors in the MPEF did not tell the fund which candidates to support. “They gave absolutely no direction for the fund to back candidates who support charter schools,” he said.

Sellers said he stands by the work the MPEF has done, including the negative mailer sent to voters that says, “Rebecca Gagnon: Good For Special Interest Groups. Bad For Our School Board.” On the back, the ad says that Gagnon is “Good For Big Donors.”

When asked which big donors he thinks are supporting Gagnon, in light of the tremendous amount of outside funds the MPEF has collected, Sellers said he didn’t know. He said he knows she was at a fundraiser and not at the August 2014 school board candidate forum in north Minneapolis that was dubbed the “People’s Forum” by the New York City PR firm, Group Gordon, that helped promote the event.

It’s important that voters know Gagnon skipped the forum to attend a fundraiser, he said, which he says was hosted by students.

The forum was hosted by a well-funded national education reform group called Students for Education Reform.

Gagnon said that on the night of the People’s Forum, she had been meeting with constituents who did not yet know her, and that she raised a total of around $400 that night.

She was shocked by the amount of money that has been raised for this school board race, Gagnon said, and she thought the final amount would be around $400,000 when all campaign reports are tallied (final reports do not have to be submitted until February 2015).

Gagnon said she has received no money from outside sources, and as far as she knows, the DFL money being used to support both her and fellow endorsed candidate Altamirano is from local unions. Otherwise, she owes her campaign $5,000, she said.

Ira Jourdain also expressed concern over the amount of money being funneled into the school board race. “Where do I begin?” he said. “I can’t believe how much money is on the campaign reports. It really makes me question the motives of those giving all of this money.”

Jourdain said his supporters are all parents, teachers and students, and people can easily understand their motives.

Both Samuels and Altamirano were contacted for comment about the amount of money the MPEF has raised, and whether or not they support the fund campaigning on their behalf. Samuels did not reply in time for publication, but Altamirano’s campaign manager, Kristy Graume, pointed to a public statement the campaign made a few days ago, which seeks to distance Altamirano from negative campaigning and notes that, legally, groups like the MPEF can send out literature without Altamirano’s approval.

Clarification: Information was added to clarify the relationship between the size of Altamirano’s total reported campaign funding and Gagnon’s. Altamirano’s funding is more than twice the size of Gagnon’s so far reported in this midterm election race.