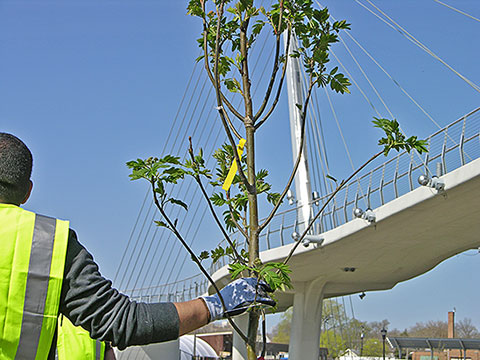 The 2011 Arbor Day on the Midtown Greenway occurred on Saturday 7, 2011. Now with ten years of planning, developments, and execution; these folks are making our community better and healthier again. After some short speech making, volunteers spread out to four distinct zones. Each group was attended by professionals that supplied instruction, training, and oversight for successful planting. Because this years planting zones were on MN DOT property and located next to Highway 55, all the people wore visibility vests. They also wore smiles as they continued a ten year tradition of people contributing their labor to help establish a Greenway welcoming to plants, wildlife, and people.

A link still exists for the photo essay I did in 2009. There are a number of people that are probably in both these sets of images, as are the organizations that have propelled these and similar activities through the past ten years. You can help the Greenway just as so many individuals have done in the past. It is people working together that produces superior amenities such as the Midtown Greenway. multi-year plans, another year checked off could be, the start of something big Zone 1 training, then  spreads out

Zone 2,  joins the act (more precisely, I join them) zone 3 and 4, were south of where the light rail elevates to cross Highway 55