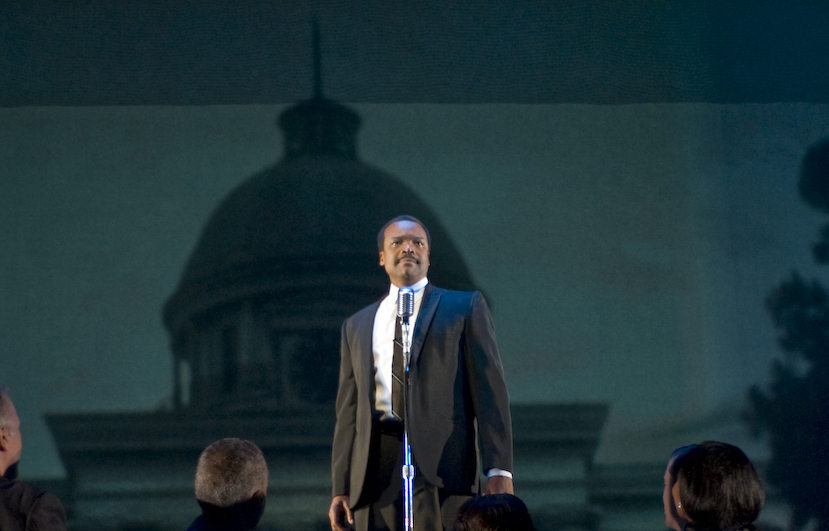 In Appomattox, Christopher Hampton doesn’t entirely manage to suppress his well-honed playwright’s instinct for crafting memorable characters and dynamic interactions, but he comes close enough that long stretches of the play feel not unlike a soft-focus dramatization on the History Channel.

Hampton’s project is to demonstrate the scope of what Gunnar Myrdal called “the American dilemma”—racism—by drawing parallels between the events of 1865 and 1965, with a nod toward the present. In the first act, we see President Lincoln (Harry Groener) and General Grant (Mark Benninghofen) striving to bring the Civil War to a close in a humane manner that sets the nation on track towards racial equality. We spend most of the second act in the Oval Office with President Johnson (Groener again) and Attorney General Katzenbach (Benninghofen again) as they try to help Martin Luther King, Jr. (Shawn Hamilton) advance civil rights.

The structure of the play suggests a close similarity between the two acts, but as written by Hampton and staged by director David Esbjornson, the two acts are very different in tone. The first act is a starchy bore; Esbjornson’s trick of negotiating scene changes by having the actors freeze in place as set elements (designed by Thomas Lynch) slide on- and offstage sharpens the act’s resemblance to the kind of animatronic speechifying seen at Disney World’s Hall of Presidents. Sven Ortel’s projections—particularly during the production’s low point, a laughably cheesy Lincoln dream sequence—do nothing to dispel the desire to get on a people mover and queue up for Space Mountain.

In the second act, Groener comes out firing on all cylinders as a shrewd, irreverent LBJ while Hamilton, as MLK, rivets—but to what end? Hampton doesn’t draw the relationship between the characters sharply enough for there to be any dramatic tension. We know what happened, and what will happen. Hampton clearly knows this, as he brings the act—and the play—to a close without depicting the event or immediate aftermath of King’s assassination. Instead, the play careens 45 years forward, bringing Hampton’s themes into the present in just about the safest way possible.

“Safe” isn’t a word you want to be using with respect to a play about race in America, nor is “useless”—the word I heard a fellow audience member use to describe the play. That may seem like a strong word to describe a play telling a story that, like the story of the Holocaust, cannot be told enough times if one more telling helps its lessons to be learned; but Hampton’s walk though these painful passages of American history lends no new insights and, as a piece of theater, is all but inert.

Seemingly in the interest of staying true to his rubric—a president for a president, an ally for an ally, an enemy for an enemy—Hampton chucks aside any possibility of drawing the audience into an engaging story. We learn in passing that Robert E. Lee (Philip Kerr) thought slavery was evil and regarded Native peoples as the only “true Americans,” but instead of exploring the complexities of Lee’s character, Hampton whisks us along to Act Two. There, we’re introduced to the push-and-pull of pragmatism and idealism between Johnson and King, but that gets pushed aside in favor of a discussion of the Vietnam quagmire. As if rushing to show how many good plays he could have written instead of this bad one, Hampton takes us in yet another direction in the final scene, featuring a showstopping monologue by Richard Ooms that leaves us wanting more—but this showstopping monologue actually stops the show.

Roger Ebert says that the best way to criticize a movie is to make a better movie, and in fact the answer to this play has already been written and produced on the very same stage: The Scottsboro Boys, which implicitly criticizes shows like Appomattox that parlay profound tragedies into middlebrow entertainment. On opening night, the Appomattox audience regularly rippled with knowingly rueful chuckles when characters—as they often do in this play—declared convictions that civil rights issues would surely be ironed out in due time. In Appomattox, the racists are treated as safely other: the acid Mary Custis Lee (Karen Landry), the buffoonish George Wallace (Mark Boyett), the unrepentant Klan member Edgar Ray Killen (Ooms). Yes, Appomattox leaves us thinking, racists are still a problem in America. You know, those other people. Not us.