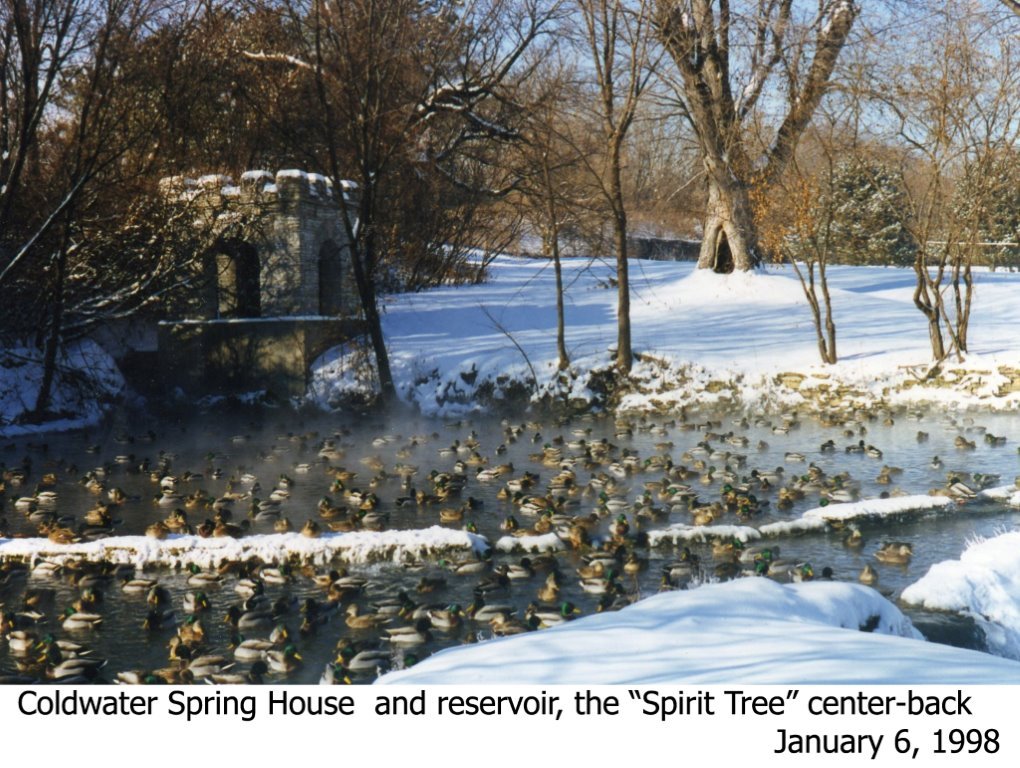 Two sets of appointed officials are lined up to okay a project that explicitly violates the law. The Metropolitan Council is promoting sewer replacement construction that contravenes the Coldwater protection law by threatening the flow to this 10,000 year old spring.

The Minnehaha Creek Watershed District is set to permit the project with assurances about “contingency plans” for unforeseen circumstances, “restoring” Coldwater Springs after “temporary” dewatering, and orders to monitor the spring daily during the 2-year construction project.

Take action. Ask that sewer construction be redesigned to the location of the current pipe without tearing up the north end of Minnehaha Park and threatening the flow to Coldwater Springs:

The language of the contingency planning (below) is slippery.

Coldwater is the last major natural spring in Hennepin County, is where the soldiers who built Fort Snelling lived (1820-23) and where a civilian pioneer community gathered to service the fort. Some consider Coldwater to be the birthplace of Minnesota. The spring furnished water to Fort Snelling 1820-1920.

A sanitary sewer pipe is scheduled to be replaced at the north end of Minnehaha Park. It is an underground construction, about 45 to 50 feet below the surface, with two 18-foot diameter access shafts cut through bedrock at either end, and a 44 by 60-foot subsurface vault. Groundwater “will just flow around” these subterranean buried structures after construction planners reported at Minnehaha Creek Watershed District board meeting (1/29/15).

A replacement 1,000-foot pipe would run horizontally below Minnehaha Creek, the Hiawatha Light Rail Transit line and Highway 55 to replace a 1930s-era sanitary sewer pipe. The project is scheduled to run for two years from this summer to June of 2017.

Both groundwater and deep well dewatering is planned that is, pumping water out from above the limestone bedrock and below in the sandstone. Daily monitoring at Coldwater is called for.

Assurances by experts of “no loss of flow” from the Highway 55 reroute resulted in the permanent loss of nearly a quarter of the flow to Coldwater. MnDOT was court-ordered to monitor the spring flow for 20 months post-construction. Despite the Coldwater protection law a permanent, daily loss of flow of 27,500 gallons was reported.

Before Highway 55 reroute construction the flow to Coldwater was measured at about 130,000 gallons a day. Now the flow rate is about 84,000 gallons daily. Adding the 27,500 daily dewatering lost to Coldwater to the current flow of 84,000—there is a mystery loss of more than 18,000 gallons

Consultants at the Minnehaha Creek Watershed District meeting admitted that the “contingency plans” are unknown, that conditions are “unforeseeable,” that an observer will be on site to come up with “reasonable solutions.”

–There is a “low risk of permanent impact to the flow.” Planners are “confident” about “restoring” the spring.

During Highway 55 reroute construction a grit chamber was cut into limestone bedrock at Minnehaha Park at 50th Street, one mile north of Coldwater. The result was dewatering at a rate of 500 gallons per minute for several months. There was a “measureable reduction of flow to the spring.”

That grit chamber cut intercepted a main limestone fracture that leads to Coldwater. The proposed sewer bedrock cuts are just 1.5 miles north of Coldwater, a half mile north of the great dewatering cut during Highway 55 reroute construction.

Sacred landscape is a reality not common in the dominate world. So it was not surprising when Minnehaha Creek Watershed District board managers wondered why the Coldwater protection law was written so narrowly.

The National Park Service (NPS), the agency that claims to “own” Coldwater Springs, acknowledges Coldwater as a “sacred site” by virtue of paper work submitted by a federally recognized Dakota band. Outside the legal recognition process Anishinabe (Ojibwa) spiritual elders also consider the spring sacred.

Many ceremonies have been held at the spring. The NPS actually called in an armed guard during a Dakota pipe ceremony September 1, 2012 for lack of a “special use permit.” Those permits were not being issued at the time because the land was “fragile.”

Based on recommendations in the 2006 Ethnographic Study contracted by NPS, Coldwater would be a Dakota Tribal Sacred Site and a Traditional Cultural Property. NPS rejected the study’s findings. One official explaining the dismissal said “they didn’t write down their stories”—a bizarre critique of an oral culture.

“Traditional Cultural Property” is a landscape that is not limited in importance to one Native American tribe or one time period, it is generically special land. Coldwater is considered to be at least 10,000 years old and is the first big spring north of the dramatic Mississippi-Minnesota confluence.

Dakota people were the latest Native nation living here in 1803 when the U.S. concluded the Louisiana Purchase. People have been in the confluence area since the glaciers melted. A 9,000-year old bison spear point was found at the Sibley House archaeological dig in Mendota (1996). The site was a backwater of the confluence where a bison, twice the size of today’s buffaloes, got stuck in the muck, speared and eaten.

Dakota teachers say Un K’te Hi, a powerful spirit of water and the underworld, dwells at Coldwater. It is not just any spring but the spring linked to Taku Wakan Tipi (Something Sacred Dwells Here) a traditional Dakota burial mound at the Veteran’s Administration pushed up by Un K’te Hi from an underground water passage (such as a limestone fracture) between Coldwater and the hill.

Religious mythology typically includes a geographic place and a story. Bounties on Indian scalps were paid by the state of Minnesota into the 20th century. The Indian wars are not over and we are entering the period of the water wars.

The alternative of replacing the sewer pipe in situ was dismissed as too hard to get to, too expensive. It would involve temporary rerouting of the sewage for the construction period.

In 2005 Minnehaha watershed engineer Mike Panzer said “There is an appearance of a gradual downward trend in flow over the past 6 or 7 years.” This is what concerns Coldwater supporters, a constant degradation of the spring. With every cut Coldwater bleeds water.

What is Coldwater worth? It was used as an emergency drinking water supply for south Minneapolis in the summer of 1976 when city water was putrid with algae. What happens to the water happens to the people.