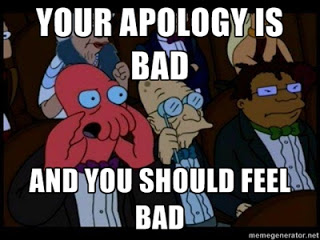 In a February 1 piece for Tribune Media Services, Stanford journalism professor and Pulitzer Prize winner Joel Brinkley wrote about how Vietnamese people are aggressive because they eat so much meat, especially dogs.

That’s an oversimplification of his article, but not by much. Brinkley reached that baffling conclusion after a ten-day tour of Vietnam, and the response to his ill-informed piece was swift, fierce and overwhelmingly critical. For direct rebuttals, you can read the comments section on the link above, or this, or this, or this.

What interests me about this fiasco, however, is what happened next. A deluge of Tweets, blogs, Facebook posts and more illuminated how and why the piece was unacceptable. Tribune Media Services posted an apology for the piece not meeting their journalistic standards. A Change.org petition for Brinkley’s resignation from Stanford received hundreds of signatures.

And Brinkley apologized. Sort of. Like so many people of privilege before him, however, Brinkley’s apology reads more as “I’m sorry you’re offended” than “I’m sorry I said something offensive.”

Specifically, Brinkley wrote: “Vietnamese seem to be particularly sensitive to criticism, like a lot of people around the world… Some of them have told me in emails that this makes them sound barbaric, which was not my intention.” He also wrote: “The column I wrote this week on Vietnam and its dietary practices has offended a great number of people. That was not my intention at all, and I’m sorry for that.”

The latter one isn’t too bad, as far as apologies-I’m-still-not-buying go. But the interesting thing is the repeated use of a phrase that seems to be a trend in public apologies: “it wasn’t my intention.” This is a handy, oft-used rhetorical device used to absolve oneself of responsibility after saying or doing something offensive. It may sound meaningful, but remember: if you burn a house down and people get hurt, you don’t get away with it because you thought the house was empty. If you drive your car through the front window of a restaurant, the damage is done whether or not you meant to do it. If you eat my lunch because you thought I didn’t want it, I’m going to be hungry regardless of your intentions.

Responsibility isn’t about our intentions. It’s about the impact of our words and actions.

And sometimes, our hearts really are in the right place. But saying something hurtful out of ignorance or carelessness is only marginally better than saying something hurtful out of malice– and the impact is exactly the same. To truly make amends for hurting someone, first you have to be a big enough person to want to make amends. Then you have to openly and respectfully listen to what people are saying. And then you have to act on that new knowledge– whether in a sincere public apology that clearly illustrates you understand what you did wrong (beyond “poor word choices” or “awkward phrasings,” because we all know that’s not really the issue), a commitment to being more careful and conscientious in the future, some sort of concrete act of contrition, or ideally, all three.

This is much bigger than Brinkley, of course (though I’m tempted to publish the private email he sent to a friend that pretty much proves he’s not sorry at all, but suffice to say I don’t think he learned much from this, except he now believes Vietnamese “are the most paranoid and sensitive people on the planet”). It’s also bigger than any “famous-person-messing-up” story. This plays out every day, in classes, workplaces, and all kinds of social spaces. Learning how to let go of our egos and defensiveness, to make mistakes gracefully, to apologize sincerely, and most importantly: to cultivate the awareness and conscientiousness to avoid those mistakes in the first place – this is the kind of work we all need to do.