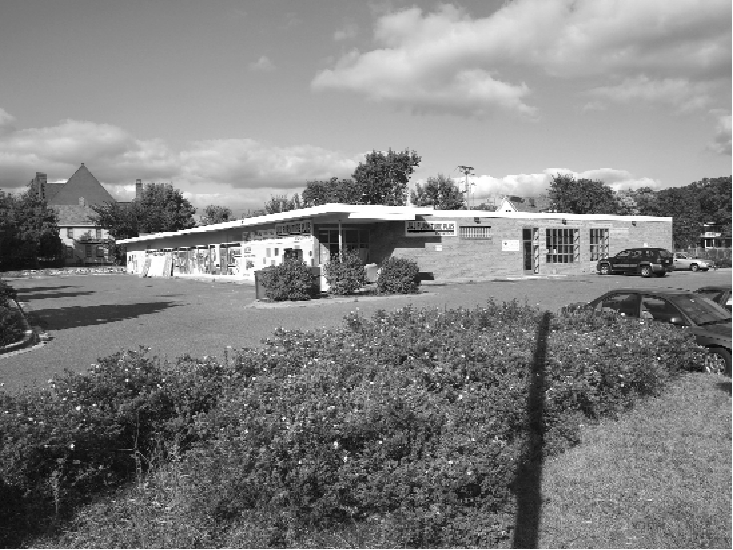 The current building on site; Families Moving Forward day center at right, new “Minneapolis” mural on the furniture store, old North Branch in the distance. Below: Lee Blons with preliminary plans at the Sept. 15 meeting.

With immediate neighbors opposing the project 85-20, and neighbors throughout zip code 55411 supporting it 44-11, the Northside Residents Redevelopment Council (NRRC) board is taking a neutral position on Emerson North, a 48-unit rental housing proposal for 18th and Emerson.

Both sides gave their opinions at a NRRC-sponsored meeting Sept. 15 in a packed room at UROC. Many people voted before hearing any speakers or questions. The project owners: Plymouth Church Neighborhood Foundation, which recently merged with Families Moving Forward (FMF), that already owns the land on which the four-story building would sit.

The FMF day center for homeless families, which is on the site now (next to the furniture store) would be located on the main level. Thirty-six of the units would be for working families, 12 for formerly homeless families who will also receive supportive services from FMF.

PCNF makes a point of working with churches and mosques in the neighborhoods; here, they list Church of the Ascension, Masjid An-Nur, Shiloh Temple and Greater Mount Vernon Missionary Baptist Church as partners. Makram El-Amin from Masjid An-Nur was among the first to speak at the Sept. 15 meeting.

Neighbors opposing the project in Old Highland, the area from Aldrich to Girard between Plymouth and Broadway, presented the negative through Brian Bushay, President of Old Highland and a NRRC board member. Those “cons” were (also as listed in the pro/con documents on the NRRC.org website): The neighborhood only recently achieved a 50-50 balance of homeowner and rental housing, they want more home ownership. Affordable housing is needed, but in the form of single-family; if the concern is affordable rentals being removed by the tornado, why not use the money for this project, on single-family repair and renovation?

Other cons the opponents listed:” The area already has more than its share of social service agencies that are needed throughout the city.” Street parking is limited and they fear underground parking proposed won’t materialize due to cost. The site doesn’t have enough green space for families. They said it doesn’t fit with the West Broadway Alive plan, though they did not give specifics.

Some took issue with the scale, mass and exterior design of the building, which planners said would be not quite as tall as the former North Branch library to the north. That building’s steep-sloped roof would be at the same level as Emerson North’s fourth floor. Mike Wynne, Executive Director of Emerge, which plans to renovate the library building, told NorthNews Emerge supports affordable housing but has not taken a stand on the Emerson North proposal. 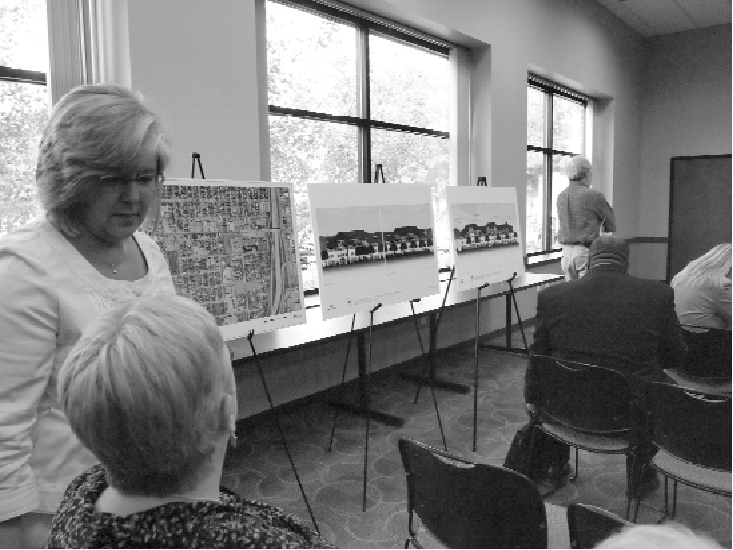 A week after the meeting, PCNF Executive Director Lee Blons said it’s too early to say what the next big move would be. “NRRC is neutral but they’ve indicated they’d continue to work with us. It goes to the residential/commercial task force. We’re in the process of hiring an architect. We want to list the concerns and address them one by one. It boils down to management, and we’re proud of how we’ve been able to do that in other areas. We’ve offered tours of our existing projects. We offered to meet with Old Highland but they chose not to meet with us. We hope to have one-on-ones.”

She further explained that the proposal came up quickly because of the timing of getting in line for Low Income Housing Tax Credits (LIHTC) which would provide $8 million of the $12 million needed for the project. “This funding is not funds that can be used for single-family homes. Neighborhood Stabilization Program has been doing that good work so far,” and PCNF already owns the site. The LIHTC application deadline was in June; they used an architect from one of their other projects to come up with something for the application, now it needs to be refined.

Blons said the Northside hasn’t gotten its fair share of LIHTC projects; Gateway Lofts, underway at Broadway and Upton was the last such capital investment. Alliance Housing, which is constructing Gateway Lofts, PCNF and Habitat for Humanity are all scheduled to present at the Dessert with Don (Council Member Samuels) meeting Monday, Sept. 26 at the RS Eden Building, 1931 West Broadway, 7 p.m.