Mark L. Wahlberg has seen many oldies in his seven years as host of PBS’ Antiques Roadshow. But standing in the Wabasha Street Caves to talk about antique flashlights was his first cavern feature.

“It’s cool. We’re in a cave that doesn’t feel much like a cave at all—it’s a bar,” he said. Wahlberg knew more about the St. Paul caves than I did.

“From what I’ve learned, this was originally a silica mine, then it became a mushroom farm in the 20s. [The cave] supposedly had a speakeasy in the back, but in 1933 it became Castle Royal and this is the actual, original stucco that is almost exactly as it was. It was a nightclub where all the gangsters of the time—John Dillinger, Ma Barker, and Baby Face Nelson—all came to party. Cab Calloway and Glenn Miller and all the big bands came to play. It’s actually quite the story. You should know this, you live here,” he said, smiling.

I met Wahlberg and New York City guest appraiser Simeon Lipman inside the caves on July 7 while the production team filmed an antique flashlight segment for the upcoming Minneapolis Roadshow. The appraisal event for the show will be taped at the Minneapolis Convention Center on July 9.

“We try to go to places that you can only see in the city we are in. That doesn’t necessarily mean what we are covering has anything to do with the place we’re going to, but there is a loose tie-in. If you’re going to do flashlights, a cave is a perfect environment for flashlights and also gives us a chance to talk about something historical in the Minneapolis-St. Paul area,” said Wahlberg.

The crew was intrigued with the cave’s spooky nature. “Supposedly it’s haunted,” Wahlberg said. “Apparently there were some gangsters killed and there are rumors that they are buried somewhere in these caves. In fact, a lot of wedding photos and things that happen here end up having orbs in the photos.”

Roadshow’s PR rep Judy Matthews explained that the show’s segment producer spends time researching and getting input from appraisers on where to film location roll-ins. “Appraisers have ideas because they travel. Our associate producer had the idea for the [Wabasha] caves for the flashlights and really wanted to come here.”

The history of the flashlights was explained by Lipman, who deals in pop culture and memorabilia. One was a 1900’s Daylo in the shape of a pistol. Lipman said it would be a really bad idea in this day and age. “Don’t pack it in your carry-on.” Wahlberg said the name “Daylo” came from the phrase “Lo and Behold, it is Daylight.” The pistol flashlight was valued by Lipman at $70, but because it has the original box, he upped the value to $100.

There were two tubular flashlight models: 1930’s “the Red Head” made by USALite, and a 1930s road safety flare flashlight still working.

A mint condition 1898 “Ever Ready” #1 was the first tubular flashlight and made of hard pressed cardboard. According to Lipman, a super-collector said only four are known to exist and they have a retail value between two and six thousand dollars.

Flashlights were originally called that because the batteries didn’t last long, Wahlberg said. “You would just flash the light, you couldn’t hold it [on] because it would burn out in a couple of minutes. You would flash it, you wouldn’t hold it.”

Popularity of all things old

Wahlberg said Antiques Roadshow gets around 10 million viewers a week. “It’s a pretty big show.” According to Matthews, it is the number one show on PBS. Antiques Roadshow has been nominated eight times for an Emmy in the Reality Television category. Matthews said they have their fingers crossed the show will be on the list when the Emmy nominations are announced mid-July.

St. Paul was Roadshow’s site in 1996 and Minneapolis in 2003. Matthews said the show doesn’t repeat a city until at least five years have passed. “It builds up demand,” she said. The other criterion for choosing a city is a convention center with a large amount of open space. “Not every city has one.”

The show only shoots in summer because it’s easier for both appraisers and the public to travel.  “We try to get a mix of large and small cities and get a good geographic mix,” said Matthews. Wahlberg said some guests travel up to eight hours to attend a show.

Matthews feels the stars of the show are the appraisers; there are 70 to 80 affiliated with the program. “What many people don’t know is the appraisers do not get paid by WGBH or Antiques Roadshow. They are considered guest experts. They pay all their own expenses, their own hotel rooms, and donate their time to this roadshow. Many have been doing this for years,” she said. The show’s website includes background information on the appraisers.

36,000 people applied for tickets to the Minneapolis show, according to Matthews. 3,000 were chosen and each person gets two tickets so producers expect five to six thousand to attend the Convention Center this weekend. “Minneapolis was very enthusiastic,” she said.

Many consider Antiques Roadshow to be a cultural icon and Matthews pointed to the many parodies of the show, from Geico car insurance commercials to Saturday Night Live. She attributes much of the show’s popularity to the stories told. “People love to hear the background of an object and to hear the appraisals. The show is easy to watch.”

There is no buying or selling at the show. Ticket holders can pick up an appraiser’s information and contact them after the show. “Most people don’t sell. We wanted to do a television series on what happened to their object, but we couldn’t find enough people who sold,” said Matthews.

Mostly heirlooms with sentimental value are brought to the show, which may explain the reluctance to sell, Matthews said. Sometimes, family legends turn out not to be true. Or people have been mislead by a family myth as to its true value.

But Matthews said the value of an object is not always the reason an item is chosen to be put on air. “We look for unusual, great stories, objects not seen before, or best-of-show categories.” Out of the ten to twelve thousand objects taped during the summer, about 55 are in final broadcasts.

The show will be visiting six cities in ten weeks. The Minneapolis segment will air sometime in 2012. 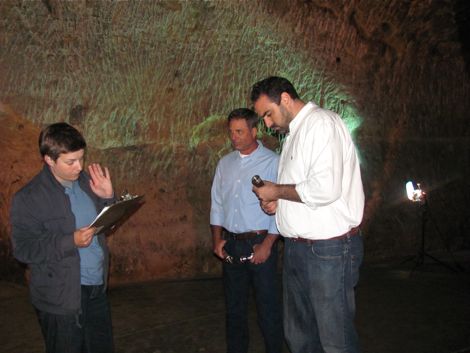 (Above) Antiques Roadshow segment producer Sarah Elliot, left, goes over the script inside Wabasha Street Caves while show host Mark L. Wahlberg and guest appraiser Simeon Lipman tend to the antique flashlights and had fun placing the flashlights under their chins. 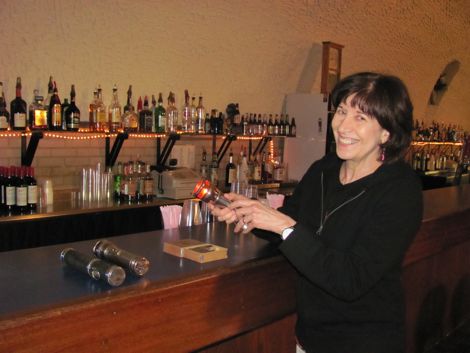 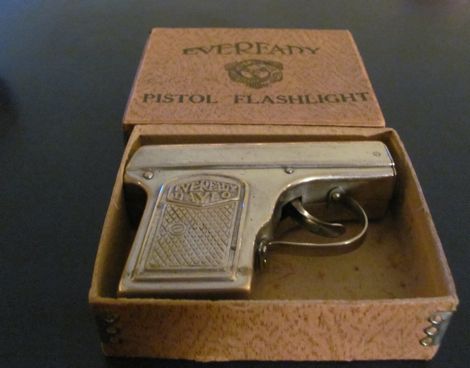 (Above) In the “Not What it Seems To Be” category is this 1916 Daylo pistol flashlight in its original box. “Don’t pack it in your carry-on,” said appraiser Lipman. 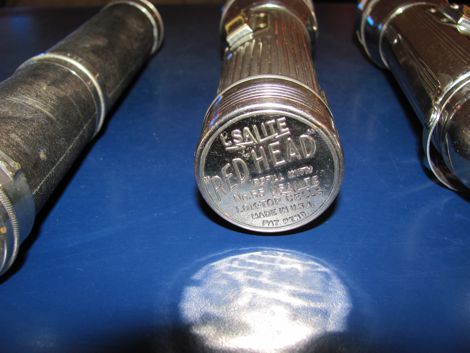 (Above) Three antique flashlights to be featured in an upcoming Antiques Roadshow program. From left, the 1898 cardboard “Ever Ready,” and the “Red Head” by USALite. 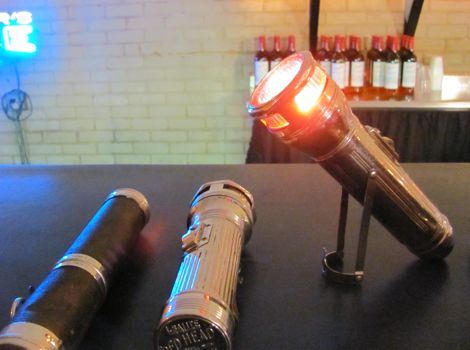 (Above) On the cave bar: the 1930s Road Safety Flare/Flashlight that still works. It has an appeal for car collectors, according to Lipman. 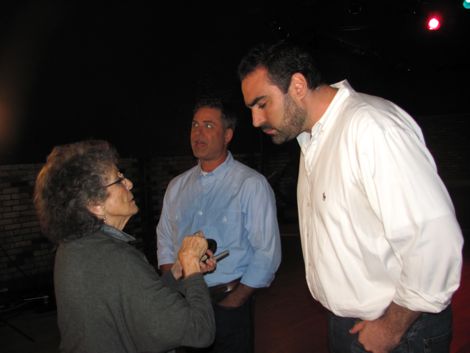 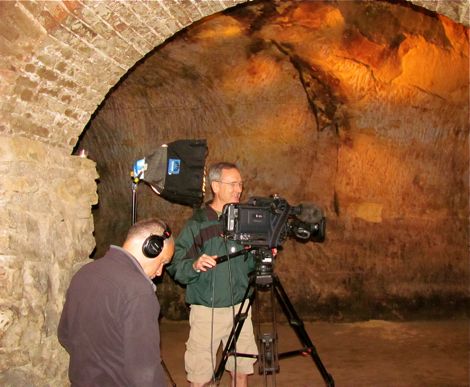 (Above) Antiques Roadshow crew filming a segment on antique flashlights in the Wabasha Street Caves. 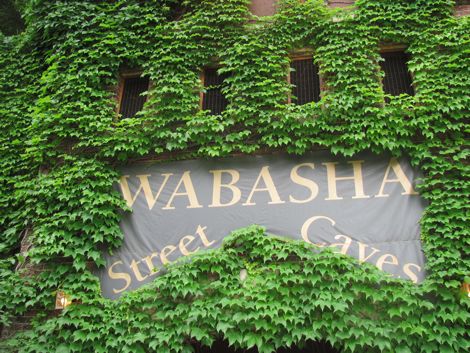