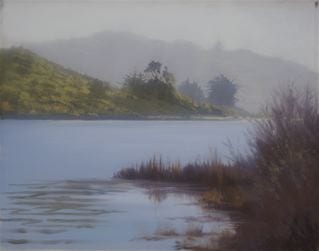 One of the works by members of the Outdoor Painters of Minnesota on display February 11 - 26 at AZ Gallery in Lowertown, Saint Paul

In the midst of this seemingly endless winter, it’s hard to imagine a better tonic for the sensory deprivation of cabin fever than the exhibition by members of the Outdoor Painters of Minnesota opening February 11 and running through February 26 at AZ Gallery in Lowertown Saint Paul.

OPM consists of about 60 member artists from around Minnesota, all of whom have in common their pursuit of a kind of painting known as plein air, which means painting that is done entirely out-of-doors and is usually completed in one sitting.

Plein air is not to be confused with commercial wildlife art (though on occasion plein air practitioners might include wildlife in their work), most of which is done in studios, often from photographs and sometimes using images projected on to a canvas to be outlined and filled in.

Far from the narrative, often metaphoric, content of wildlife art, plein air is more like visual haiku; painters devoted to the genre strive to capture the essence of the passing moments that loom directly in front of the canvas, as Jack Dant, the president of OPM, explains.

“It’s very dynamic, because when you are outside, everything is changing, especially the quality and intensity of the light,” he says. “There are sounds, wind blowing, mosquitoes, snow, dust, all of it around and sometimes even landing on the painting.”

Despite what might seem like distractions, Dant  goes on the say that immersing yourself in the experience – and surrounding environment – is “the best way to experience the subject.

“Light is, of course, the biggest factor in plein air because it can change so quickly,” he observes. “You can be painting a scene where things go from sunny and vibrant to overcast and bland in a matter of seconds.

“It’s harder than painting in a studio, but it teaches you to make quick decisions, trust your artistic instincts – and learn to draw well.”

Painters (especially watercolorists) have been working outside at times for many centuries. But it was not until the late 19th Century that plein air, as a specific genre of painting, came into existence.

For that to happen, two conditions were required. One was the Impressionists’ insight that all visual imagery consists of light and light’s constituent elements, color. The other was the commercialization of art supplies that made easily transportable tubes of oil paint and trays of water color and sticks of pastels not only available but reasonably inexpensive so that even a penurious artist (and then, as now, they outnumbered the prosperous kind) could afford to buy what was needed to take into the field.

“As soon as things got portable, artists could paint on location,” says Dant. “And painters like Isaac Lebitan, Monet, Manet, Cezzane, Pissaro, VanGogh began working outside.”

OPM’s exhibit at AZ is a departure for the organization. Dant explains that OPM is always seeking out exhibition space and was particularly interested in extending the reach of its shows to the artistically rich Lowertown neighborhood, where OPM had never mounted an event before. When Derek Davis, one of the owner-members of AZ Gallery joined Outdoor Painters of Minnesota, he naturally suggested his gallery as a venue.

“[OPM] knew about AZ and knew that it was a solid gallery that does good shows, so it seemed like a natural  fit,” explains Dant.

According to Dant, visitors to the OPM exhibit should be on the lookout for, as he puts it, “the variety of approaches [our artists] take.

“Some are loose, some tight, some like to do buildings and other manmade structures, others only do landscapes,” he says. “The richness of the experience and of the ways we try to capture that experience is really the essence of plein aire. You will not see the same thing over and over.