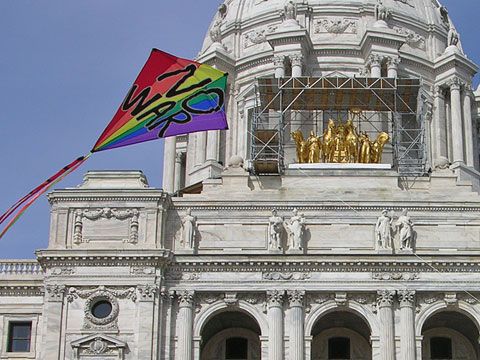 Saturday March 19, 2011 provided a pleasent day for a walk in the Twin Cities, and an energetic and divers group of individuals gathered to express their opposition to the policy and practices that support the war making of our government. It was a local gathering in association with nation-wide marches protesting ill conceived use of this nation’s men and women in our armed services. When politicans assert the need for civil servants to take pay and benefits cuts, while supporting tax benefits for the most wealthy, and willfully ignore the immense monetary cost of wars, their fiscal arguments must be considered illegitimate.

But logic does not have much sway to a lot of the voting electorate. That is why there is so much emphasis placed on the hot-button “side” issues. The manipulation of our fellow citizens plays to those citizens true desire to do good, but the lack of understanding of what is truly in their best interests, will have them vote and surrender power to politicians that will betray the mass of people to benefit the already privileged.

Your tactic to oppose unjust and misleading politics may not entail taking to the streets, but you should not remain uninvolved. You may actually be able to support the United States tactical support of a multi-national reaction against Libyan Muammar al-Qaddafi, but there are too many other instances where our men and women are regarded as invading armies. My nephew, Andrew Wilfahrt, was recently blown-up with an IED (Improvised Explosive Devise) in Afghanistan. He was a target not for any personal reasons. He was destroyed as a foreign agent in a land where children for many generations have grown in war zones. We have too many children in our own country needing better examples of how to treat each other, without the chaos intrinsic with war. Our enemy is fear and hatred of other people, not other people.

Here are some of the messages of people opposed to war and the war making machinery. It was a pleasant spring walk with some very good folk. They represent some of the better “class” of people in this nation. attack is not the answer war is making us poor give Peace a chance is the War Economy working for you? not one more dollar Cindy Sheehan speaks for me 1984 not an instruction manual – think “doublethink” Teachers didn’t bring our country to its knees