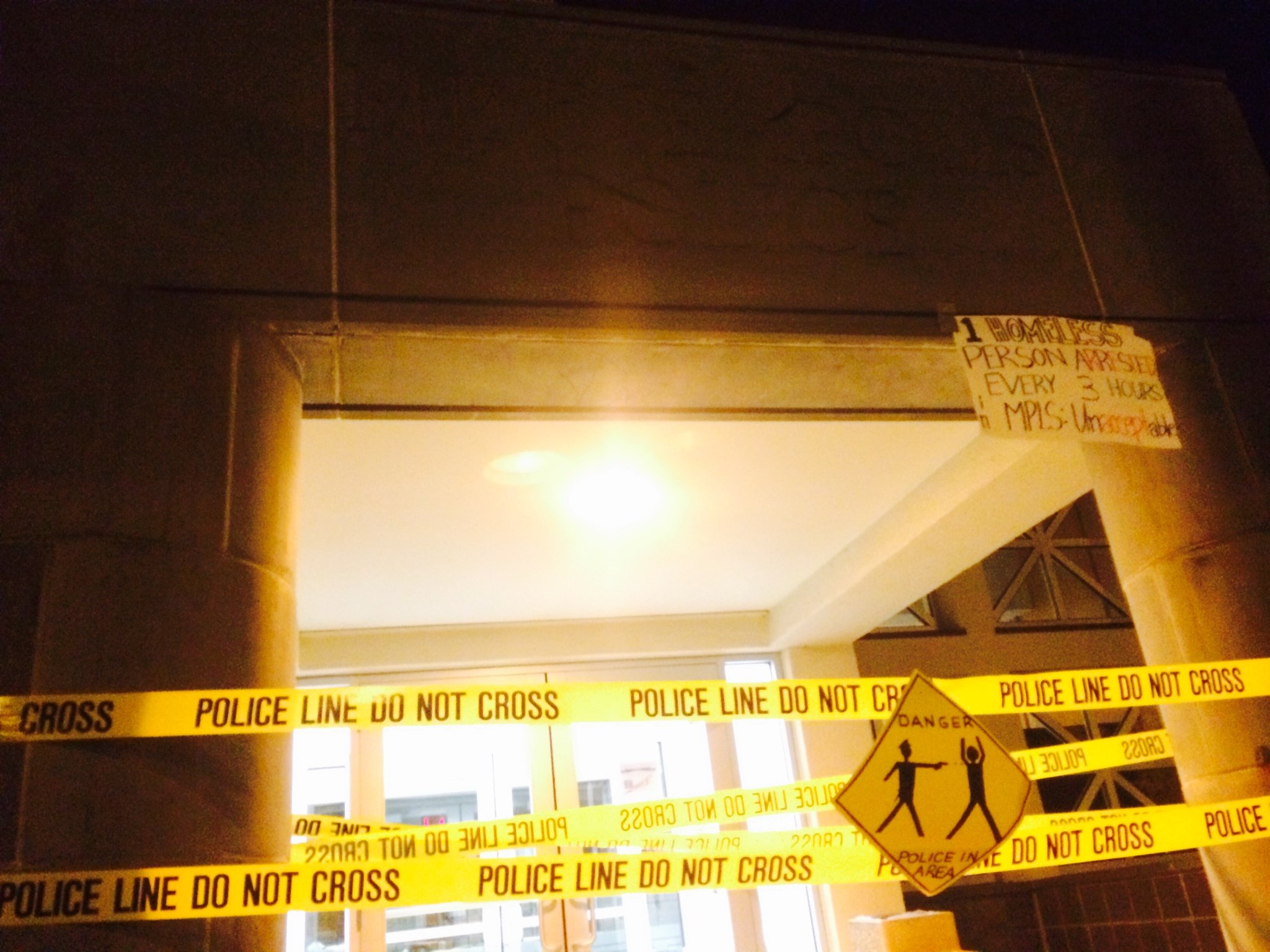 “Indict, convict, send them killer cops to jail; the whole damn system is guilty as hell.”

The refrain rang out as roughly 100 protesters against police brutality marched Wednesday night from North Commons Park in Minneapolis to the Fourth Precinct of the Minneapolis Police Department and at times blocked residential traffic, in an effort to raise awareness around their demands for justice.

When they arrived, however, no officers were there to greet them – save for one that had accompanied the march.

The demonstration was sponsored by twelve local activist organizations, among them Communities United Against Police Brutality and Twin Cities Save the Kids. It was part of “Ferguson October,” a nationwide solidarity struggle emanating from out of Ferguson, Missouri, where 18-year-old Michael Brown was fatally shot, unarmed, by officer Darren Wilson.

Activists from Ferguson have been calling for sustained nationwide protests this month to demand that Wilson be charged with a crime and arrested. Protests in Ferguson are expected to intensify immensely if this demand is not met.

To those ends, activists in Minneapolis planned this demonstration as part of a week-long program of protests and other educational events.

The protestors arrived at the Fourth Precinct and surrounded the main entrance, putting police tape up around the pillars in front of the door. In addition to chants that seemed to taunt Police Chief Harteau, Mayor Hodges was the target of some rhetoric, calling into question the seriousness of her efforts at improving police-community relations.

“I think a lot of [Mayer Hodges’] efforts are really just sort of window dressing; we have given the city a list of 31 concrete actions they could take right now with no law changes…let’s see some action on those,” said Michelle Gross, president of Communities United Against Police Brutality.

“Police brutality is a local and national epidemic. There were 97 actions all over the country and so it was very important that we were here to point out the epidemic that is happening in this very city as well as across the country.”

As Gabriel Thompson notes in The Nation, Mayor Betsy Hodges comes out of an activist background herself and came into office last year under the campaign slogan of “One Minneapolis,” acknowledging racial disparities as her central issue.

In a recent post on her own website, Hodges welcomed a continued dialogue with Minneapolis communities, stating that, “My vision for Minneapolis is of a city where every harmful gap in outcomes that are worse for people of color than for white people is eliminated. Every one of them.”

The blog post outlined several key goals toward this vision, including implementing body cameras for police officers, “improve the Police Department’s early-warning systems to identify and help officers address problems before they turn into officer misconduct,” and to “improve citizens’ and police officers’ ability to file complaints about misconduct without reprisal.”

At the protest, a volunteer went around handing out copies of the 31 recommendations put forward by CUAPD to the City Council and Mayor of Minneapolis. One of their main demands is the implementation of “personal liability insurance for police officers, through a Charter Amendment.” The document acknowledges the unlikelihood of such a policy coming to pass, and thus notes that they have put out an ongoing petition for a referendum.

Another document being passed around titled “Response of the OPCR to Civilian Complaints of Police Misconduct,” cited figures from the Minneapolis Office of Police Conduct Review’s own official reports to argue that the entire existing system of addressing and dealing with complaints and grievances was totally ineffective.

According to the document which draws upon data from the OPCR’s first 21 months of operation, (October 2012 through June 2014), out of 664 submitted complaints, 141 of which contained allegations of excessive force – 36 cases under full investigation led to the actual convening of a panel and only three allegations of excessive force were found to have merit. The document goes on to state that as a result of this, only two officers received ten hours of unpaid suspension and three officers received letters of reprimand in their files.

Motivated by a profound sense of injustice, the protestors proudly announced their intention to continue making themselves heard as they marched back to North Commons Park and renewed chants of “No justice, no peace.”

“If police brutality is happening not only in Minneapolis but also around the world, if we can change something here, it would be really helpful,” said Derrick Revies, founder of Film the Police Minneapolis.