I strongly suspect that Mark Andrew’s campaign will put blame elsewhere. Mark Andrew supporters have been already assigning blame in social media. The truth is that the convention delegates did not support a candidate by a super-majority. I think “No endorsement” is the legitimate result of the convention. 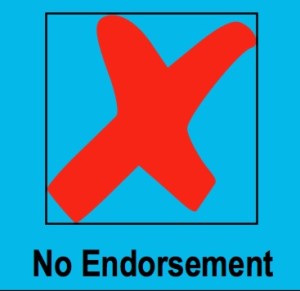 The vote advantage that Mark Andrews appeared to have had, now seems to be an arithmetic error. It took three hours on the third vote to determine that an almost 100 vote error had been made. Previously the leaked number was 53% which then went to a dead heat. The judgement of whether that was an error or a deliberate mischief, I leave to you.

With the candidate drop-offs, it was clear that most of the votes rolled up to oppose the leading contender. Visibly, one could see shirts of dropped contenders still in the voting area. When I asked them what their intent was, they answered. “no endorsement”. Indeed two candidates even said in the questions that they were not going to abide by the endorsement.

The whole Gary Schiff endorsement of Betsy Hodges was beautifully done to help “no endorsement”. First of all, it does seem discourteous to not allow a brief speech to dropping candidates. Yes, Gary was going to announce that his personal second choice was Betsy Hodges. However that information was widely known throughout the floor. Even I could immediately tell by the number of green shirts voting no on the first quick vote of held-up badges. The whole move had the potential of two outcomes: 1) Gary Schiff looks like he is trying to dictate to his people on how to vote (very diplomatic phrasing prevented that) or 2) Mark Andrew is taking substantial convention time to prevent an exiting candidate from speaking one minute. When Gary spoke in the hallway after the incident, it was powerful. He inspired his people to stay and fight for a second choice or no endorsement. If one were to award points, all points would have gone to the no endorsement coalition on this series of moves.

Even more importantly was the real contest – “Was Mark Andrew, an acceptable choice?” People were more than inspired for a candidate, they were also inspired to oppose Mark Andrew. The most telling argument was about Mark Andrew’s green credentials. The rumor is that Mark Andrew’s company, GreenMark, represents Xcel and that his solar program would be implemented by Xcel. Xcel has an incredibly bad record for implementing green initiatives. The stadium handling has left suspicion on anyone who was not publicly opposing it. GreenMark is strongly entwined with stadiums. There was a social media discussion on if Mark Andrew had really significantly supported the marriage equality movement. There was a feeling that Mark Andrew came back into politics claiming support of many issues when he had been conspicuously absent. On trust, values, and previous work, the Mark Andrews campaign lost the points on being an acceptable second choice.

Now here is the interesting part. People personally like Mark Andrew. Indeed I saw one person hide from Mark Andrew because she did not want him to see her in a Betsy Hodges shirt. The one time I had met Mark Andrew, I was very impressed. And you all know that this curmudgeon does not impress easily. This personal persuasion is probably what catapulted Mark Andrew to the leadership position. Unfortunately, this game seemed about coalitions taking down the leader.

The trend this year seems to be in taking out the old guard. One Facebook response to “I think it’s sad that the young people today have no stamina” was “Ya, those young people just stopped your candidate from the endorsement, so I wouldn’t be so quick to judge.” Indeed more persuasion seemed to be happening in social media than on the floor. It bodes well for the DFL party, that convention politics is now a game for young people again. The no-endorsement coalition really organized well through social media.

The floor was set up auditorium style instead of around tables. This limited discussion on the floor. So persuasion had to happen in hallways or through printed media if one was not social media connected. I have a friend who likes to hold her decision up until the last minute. I asked her what she thought was the most effective piece. She said that right after the Northside candidates had dropped out, there was a Northside piece for Betsy Hodges that was very effective. This resonated with her very black urban area. In the Northside effective piece, Betsy Hodges takes Mark Andrew to task for calling Northside “a clean canvas” as if all the people who now live there are invisible and not important. Betsy then lists a impressive list of what she has done for Northside. 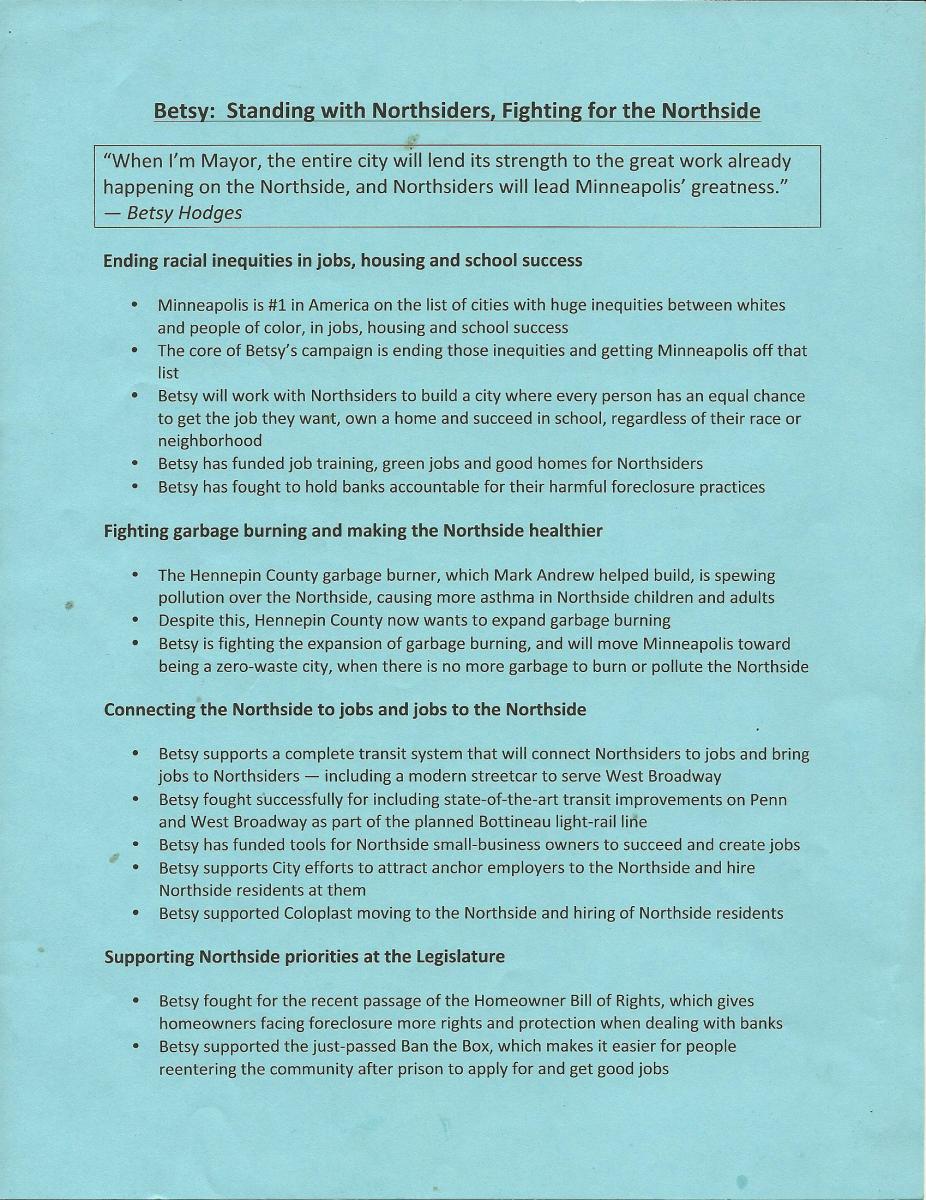 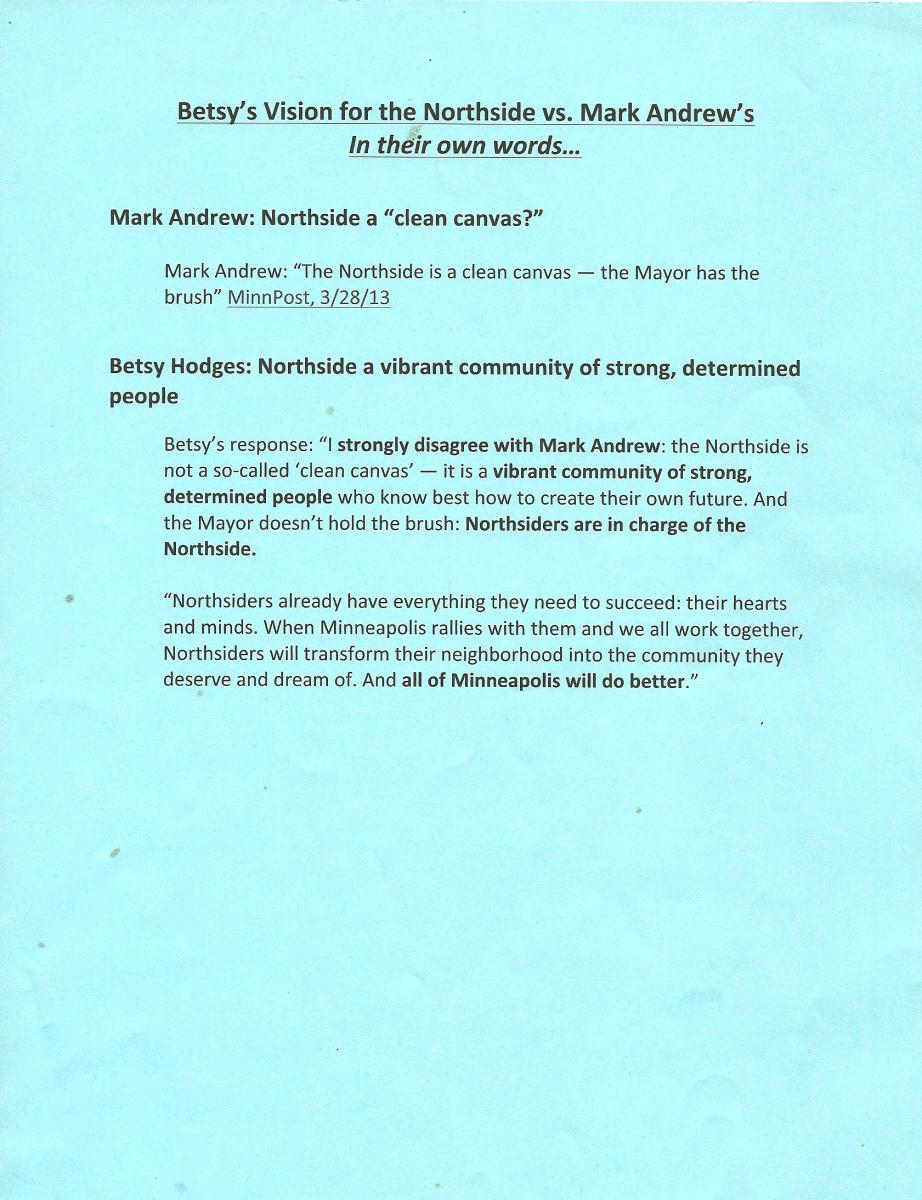 In terms of shirt color, the Betsy Hodges team failed. They had a blended gray that did not stand out even though it was a cute design. The Mark Andrew green stood out and was aided by the fact that another park board campaign had picked the same green. There was a vivid sea of green and an invisible grey.

The real question is who was deliberately slowing down the convention. Was it just normal where Minneapolis has one of the largest conventions. One person told me that it was the third largest in the country. Or were there deliberate attempts to slow down the convention and win by attrition? The first ballot did not start until about 3 PM. The ballot counters were not recruited before from outside Minneapolis but recruited from the floor. That meant more time spent in training and first timer slowness. Where St Paul had about a half hour turnaround time, Minneapolis was having a 2-3 hour turnaround time. The time war was ultimately won by the “no endorsement” coalition when they walked out. The timing of that was good because many people were leaving anyway. Quorum (enough people to legally hold business) was lost.

Even if the central committee chose to endorse later, it would be widely seen as a tainted endorsement of a small group of people who did not respect the convention.

I personally predicted no endorsement. After the first ballot, I thought endorsement was favorable. Mark Andrews had an almost 10% advantage plus favorable drop-off rules. Gary Schiff had the most impact in the convention outcome with his moves. As an observer it was fun to watch since I was not participant.

It is clear that everyone is going to the November off-year elections where second or third choices will probably determine the race. Minneapolis has a real election again.